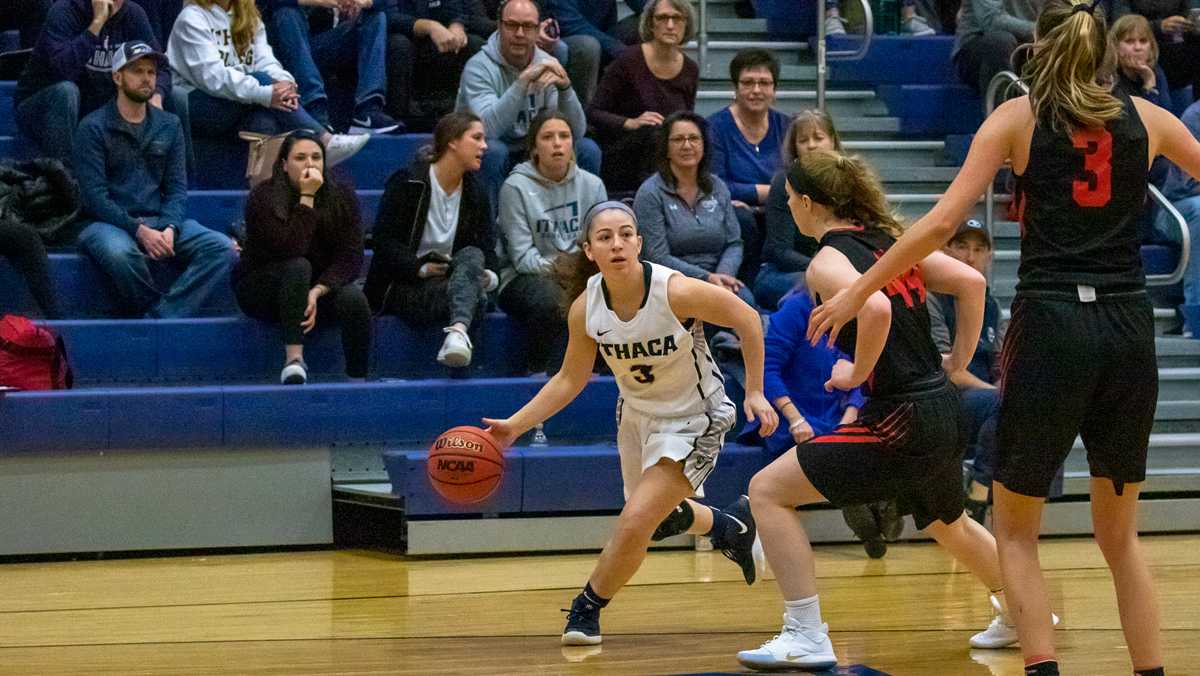 Junior guard Juliana Gamboa first competed in the Ben Light Gymnasium while wearing a green uniform for William Smith College against the Ithaca College women’s basketball team when she visited during the 2018–19 season. This season, Gamboa suits up as a Bomber and calls Ben Light her home court.

Gamboa spent her first two years of college playing for William Smith, which competes against Ithaca College in the Liberty League. She started in 11 of 25 games in her freshman debut and 17 of 22 as a sophomore when she led the team in assists. Gamboa was also named to the Liberty League All-Rookie Team her freshman year.

Despite her individual success, Gamboa said she decided to transfer because of the poor team culture and bullying. She said that the environment affected her mental health so much she decided to quit the team before the end of the 2018–19 season.

Gamboa said that she spoke to the coaches at William Smith before leaving the team and ended on good terms with them. Lindsay Sharman, William Smith women’s basketball head coach, declined to comment on Gamboa’s transfer, citing a policy that does not allow her to comment on students at other institutions.

She said she no longer speaks to anyone on the team, even teammates that she was friends with before transferring.

“It’s just toxic over there,” Gamboa said. “I’m not surprised that somebody I was friends with became like the rest of the team because you want to fit in at the place that you are.”

The Bombers beat William Smith 60–48 in a Liberty League conference match-up Jan. 11 and will play the team again Jan. 31 in Geneva, New York. Gamboa said that she felt some anxiety during warmups right before the Jan. 11 game and struggled to focus. She said this game was the first time seeing most of the team since transferring schools.

“I was honestly a little bit scared, but having my [new] teammates and coaches there checking in with me during the game helped me a lot,” Gamboa said.

Gamboa said she did not look to transfer anywhere besides the college because she still wanted to be close to the friends she did have at William Smith. Ithaca is approximately an hour and five minutes away from William Smith.

Gamboa said the coaching staff at Ithaca College has been very upfront with her since the beginning of the transfer process. She said that it was very honest with her about the team dynamic and told her that as long as she worked hard on the court and just played basketball, the team would respect her. Head coach Dan Raymond said Gamboa has done just that.

“She’s very coachable,” Raymond said. “She wants to do what we ask her to do. She’s very inquisitive, trying her best to fit into our style and the way we coach. I think if you ask any of our players, they’ve enjoyed getting to know her.”

Adjusting to the Bombers’ style of play on the court was difficult at first, Gamboa said. She said the team at William Smith ran mainly ball screens, which meant the offense centered around two players. Gamboa said the Bombers play with more ball movement and fewer screens.

Senior guard KellyAnne O’Reilly said Gamboa always asks how their teammates are doing and wants to talk about more than just basketball. O’Reilly also transferred to the college as a junior in 2018 from Manhattan College. She said she understood that the transition to a new school is difficult.

“I reached out to her in the beginning of the year just to give her a helping hand because I knew what it was like coming in and not really knowing anyone,” O’Reilly said. “Obviously acknowledging our transferring situations were very different, I didn’t force it on her, but we’re great friends now.”

Gamboa said that knowing that both O’Reilly and assistant coach Mary Kate Tierney ’14 transferred to Ithaca College during their careers reassured her that having a successful transition onto the team was possible. Tierney transferred to the college in 2011 after playing for Bryant University for three semesters.

After being a Bomber for a little over a semester, Gamboa said she is happy with her transfer decision.

“If I didn’t go through what I went through over there, I probably wouldn’t see Ithaca as such an extraordinary place,” Gamboa said.