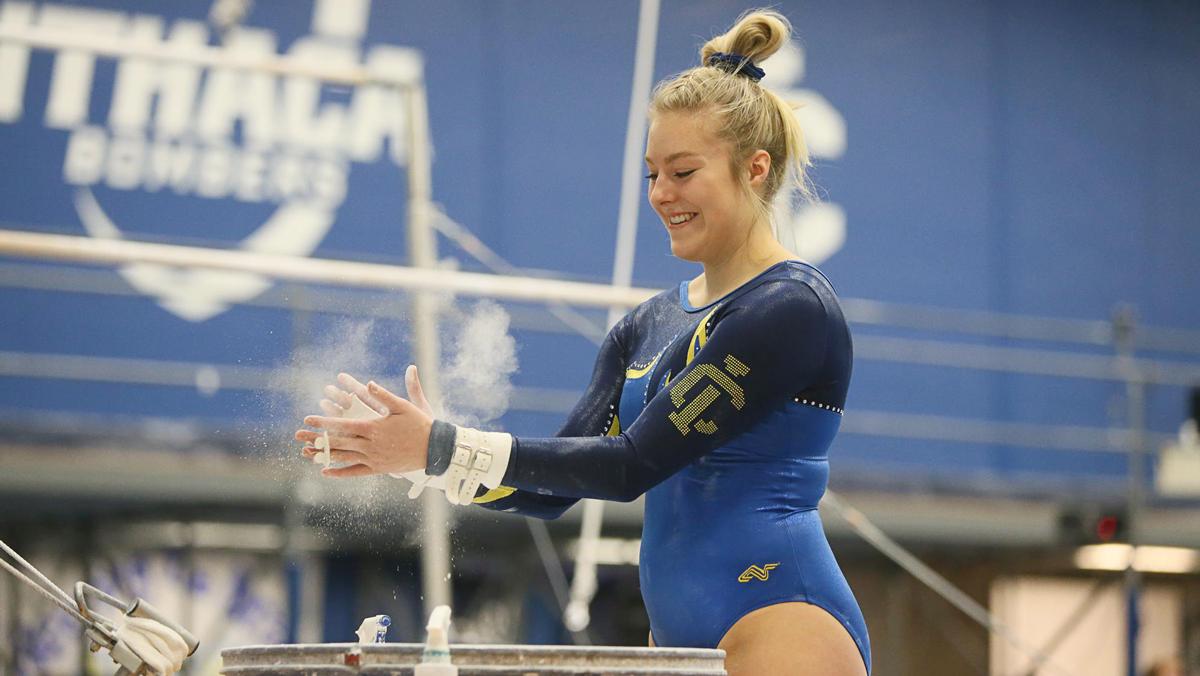 Courtesy of Ithaca College Athletics Department
Courtney Christoforo chalks her hands before competing in the uneven bars in the Bombers first home meet of 2020.
By Willy Wright
Published: February 11, 2020

In the 2019 Ithaca College gymnastics season, then–sophomore Courtney Christoforo won the individual title for the uneven bars at the National Collegiate Gymnastics Association championships. Now with a new season underway, Christoforo strives to defend her title and lead her team to success.

The Bombers have competed in four meets so far this season, most recently falling to Springfield College and Ursinus College on Feb. 9 in a tri-meet in Springfield, Massachusetts.

Staff writer Willy Wright spoke with Christoforo about what she is doing to get back to the national stage and how the team has performed throughout the start of the season.

Willy Wright: How have you stayed motivated after reaching such a high accomplishment last year?

Courtney Christoforo: For me, it’s more about the team. I want to do my best because I want our team to be as successful as possible. Gymnastics is an individual sport, but in college, it’s more about the team. So I want to set that good example for my teammates and the underclassmen and try to be that example of hard work so everyone can be on that level. If we’re all on that level, we can be really successful as a team.

WW: Now a junior, how has your role transitioned into being a leader on the team?

CC: I’ve seen a big difference this year. We have a leadership team, so me and another one of my teammates are enthusiasm leaders. We are in charge of keeping the energy up and trying to pick it back up if we have a bad event. But it’s also been more about communicating with teammates if they’re concerned about anything or if they’re struggling. A lot of them have been reaching out to me as somebody who can help them with whatever they are struggling with. It feels really nice to be able to do that for them.

WW: What have you done to mentally and physically prepare to get back to compete for a national championship again?

CC: I still have to go back and get into [nationals]. Mentality is the problem for me especially, so we’ve really been working on positive affirmation and making sure I have confidence in myself so I can perform at my best. The physical stuff is down — just the mental stuff is really important to focus on because with having that extra pressure, it’s important to know I can do it and remain confident.

WW: How have you and the team performed so far this season in comparison to your expectations and goals?

CC: It wasn’t the start that we hoped for. We had some injuries and a few setbacks, but every year is different, so we really try and keep that in mind — that the process is going to be different every single year. We have our goal of where we want to get to, and so every day we focus on that in the gym. We really try not to have expectations because we do know that every year is different, and we will get there, but this year is just taking a little more time. But we have all the talent and all the potential, so we’re going to get there for sure.

WW: What’s been a difference–maker for the success of the team so far this season?

CC: A difference from this year compared to last year is that we have a smaller team. So I think that we are super close as a team, all of us together. In terms of enthusiasm, there’s obviously less of us to cheer, but that means everyone has to be extra loud and excited. I think that’s something, in the beginning, we struggled with a little bit because we didn’t have those extra people, but we really picked it up for our home meet last weekend, and it made such a big difference. Having those loud cheers helps pick everything up.

WW: What can we expect to see from the team’s performance for the rest of the year?

CC: I’m really excited for the rest of the season. We had one struggle two weekends ago, and it really showed us where we were. We’ve been making some lineup changes and improvements. We’ve changed our focus in the gym. So I feel like everything is going to fall into place, and I’m really excited to see how well we do. We’re going to do really well as the season goes on.