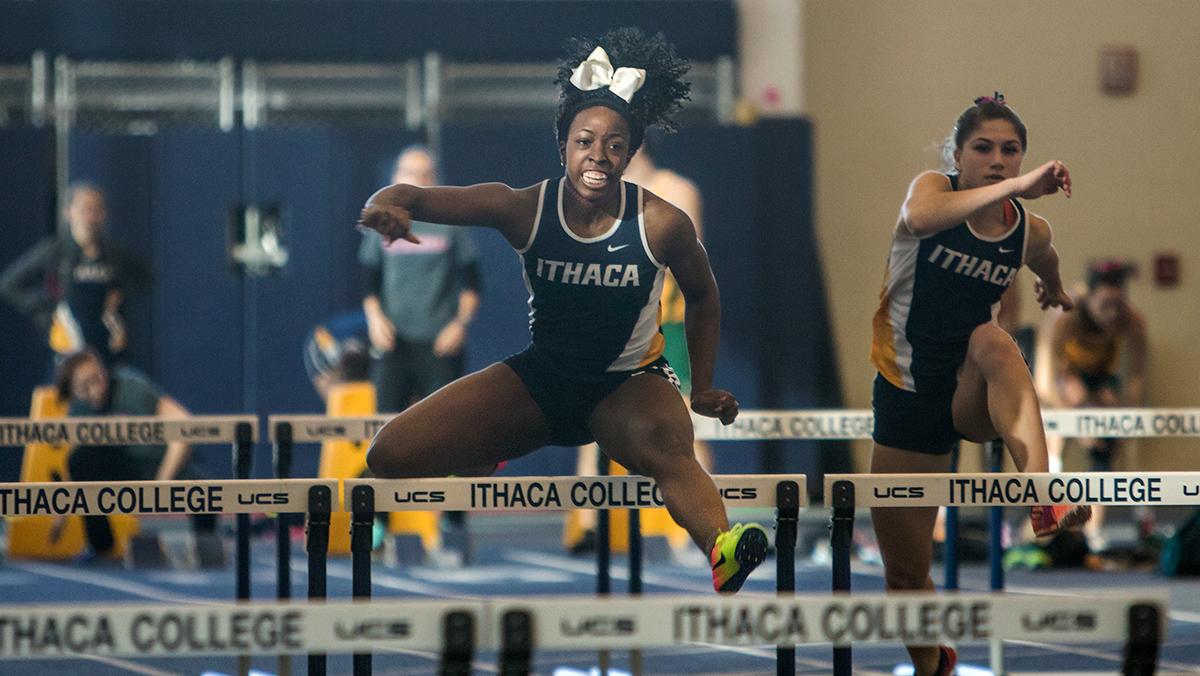 Junior hurdler and sprinter Amber Edwards, wearing the same white bow in her hair that she wears every race, says just two words quietly to herself — ‘quick’ and ‘punch’ — as she waits for the gun to go off, eyes set on the lane of hurdles ahead of her.

Edwards was recruited to the Ithaca College women’s track and field team as a hurdler without ever having been formally coached in the event. This season, she is recovering from an injury that limited her sophomore campaign.

She began running track and field in seventh grade, following in the footsteps of her brother. The sport, however, quickly became a way for her to stay sane, she said.

“It’s something that I love to do, and it keeps me positive and motivated to do better,” she said.

She joined the New York Novas Track Club under head coach George Taylor in middle school. The Novas is a track club based in Queens, New York, that accepts runners ages 6–18 at any level of competitiveness.

“My coach was teaching everyone to hurdle with pipes,” she said. “I went over a few and fell, but he kept encouraging me.”

Before Edwards joined the track and field team at Midwood High School in Brooklyn, New York, she emailed the coach, telling him that hurdling was her main interest. There was not a hurdle coach at her high school, so she had to teach herself and her teammates how to hurdle without proper guidance. Though her high school coach was unable to help her with her hurdling form, she said that did not stop him from supporting her in what she loved to do.

“Constant motivation from my coaches is what kept me with hurdling,” she said. “I found that I improved each year.”

“She had a lot of success in high school, and she’s a really good student,” Potter said. “She has a fabulous personality, is really competitive and always wants to improve. I knew that she’s a full package and would help take our team to the next level.”

Edwards earned All-NYSCTC honors in both indoor and outdoor track and field during her freshman campaign. Potter said these recognitions came as a result of hard work and determination by Edwards to improve her sprinting and hurdling form.

However, during her sophomore year, Edwards suffered a fracture of the desmoid bone in the bottom of her foot. This injury barred her from competing in the second half of the 2016 outdoor season, but she said she was encouraged by Potter to take her time healing and ensured that she would return the next season even stronger. While recovering from her injury, she had to wear a boot and do pool workouts.

“She’s always there when I need help, whether that be in track or in school,” Edwards said. “I love our one-on-one communication. She’s the coach I have always wanted.”

Edwards said her favorite thing about her team was that when she came to college, she already had over 60 friends.

“Whether we’re a sprinter or a long distance runner or a thrower, we’re all close,” Edwards said. “When I was taking Anatomy and Physiology freshman year, I had upperclassmen help me study for my tests, and I had one of my teammates as a tutor for psychology. We aren’t just teammates; we’re family.”

“Amber is always supportive and caring toward her teammates,” Lu said. “She always has a smile and a bow on her face.”

Coming off a season of standing in the crowd, Edwards has already shown improvement, Potter said.

“Her form has improved quite a bit,” Potter said. “We’ve worked a lot on her sprinting form as well, and she’s gotten faster from running sprint events.”

“It’s still pretty early in the season, but my hope is that she gets to Nationals,” Potter said. “She has the proper work ethic, and she deserves to be there.”