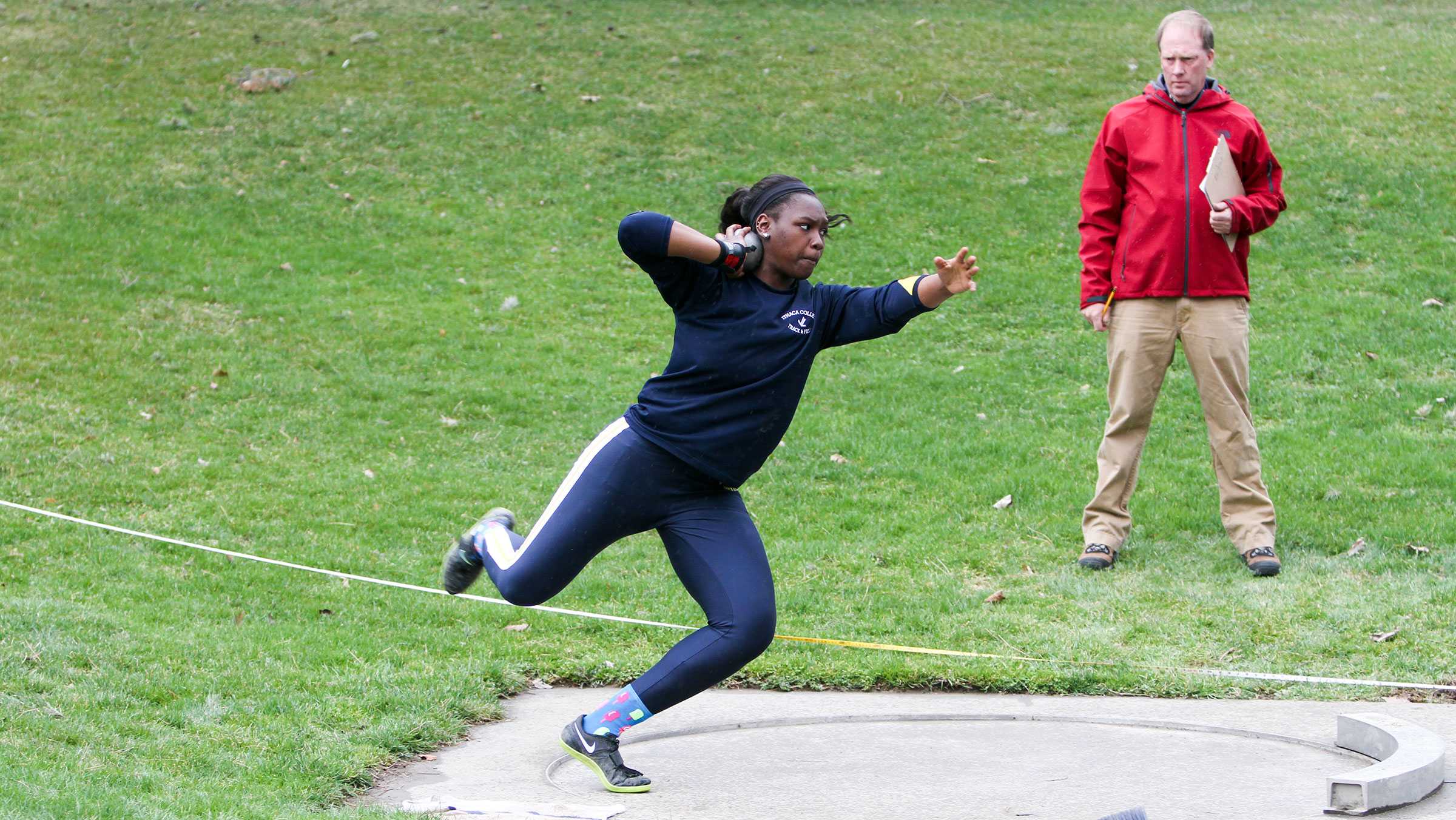 Jennifer Williams/The Ithacan
Junior thrower Brandy Smith tosses the shot put in her event during the Ithaca Tuesday Meet on April 22, 2014, on the throwing field next to Butterfield Stadium. Smith won the 2015 national title in discus in May.
By Jonathan Beck — Sports Editor
Published: August 26, 2015

Junior discus thrower Brandy Smith of the women’s track and field team is no stranger to garnering awards and recognitions in her career. However, this was a new one for Smith.

On May 21, she became the first-ever outdoor track and field national champion in Ithaca College’s history with her performance in the discus at St. Lawrence University in Canton, New York.

Smith, who participated in her first NCAA Division III Outdoor Championship, was the fourth overall women’s track and field student-athlete to win a national title at the college. She had a career-best and stadium-record throw of 53 meters, which was just 2.02 meters short of the Division III Championship record.

Sports Editor Jonathan Beck spoke with Smith about her national title win, her off-season training and how she is preparing to defend her title next season.

Jonathan Beck: What was it like to win the Division III national title in discus?

Brandy Smith: Honestly, there was a bit of controversy going on, so my coach actually had to appeal for my throw. It all was over my head. I wasn’t expecting it. It was happening, but I wasn’t convinced it was actually happening.

JB: What was running through your head as you stepped to the line for that final throw?

BS: You have three initial counts to qualify for finals, and my first two throws in [preliminaries], I actually fouled out, so I had my third throw, and either I have the qualifying mark for finals or basically I have no mark and I foul out and I go to Nationals for no reason. So I went to the circle for my final throw in [preliminaries], and I was hoping to get a mark to qualify in the meet, and that’s that.

JB: Did you train a certain way once you realized you could have a chance to get to Nationals?

BS: My freshman year, I qualified for Nationals by one spot, so basically sophomore year I wanted a list of things to qualify, and I knew from the first meet I would make the qualify mark that would take me to Nationals, so my entire season was geared towards me going to Nationals.

JB: What does it mean to you to be the first-ever outdoor track and field national champion for the college?

BS: I’m really happy. I’m happy it’s me, but I want to have more national championships for years to come.

JB: Is there a big difference in competing in indoor versus outdoor track and field?

JB: How did you train over the summer, coming into this school year?

BS: Coach assigned me and the entire team a pretty tough lifting regimen. We have a 12-week lift I’ve been working on and finishing that up, and I’ve been throwing four to five times a week, eating healthy and just what I’ve been doing ever since I’ve been a thrower. I just picked up the intensity a little bit. When preseason comes, I’m ready to go to pick up the shot [put].

JB: What are your goals for this season, knowing now what you can accomplish?

BS: It’s actually something I spoke with my throwing coach about, but I have a few goals actually. I’d like to, if at all possible this season in indoor, to qualify and win Nationals for the weight throw. Across both seasons, I’d like to qualify for all events I throw in. Even though I’ve already qualified for discus and javelin, I’d like [to] qualify for hammer throw and shot put. I’d like to win Penn Relays. It’s one of the biggest and oldest in track and field history, and it’s an outdoor meet. I’d like to see more throwers qualify for Nationals too.