Junior walks onto football after two-year hiatus from sport 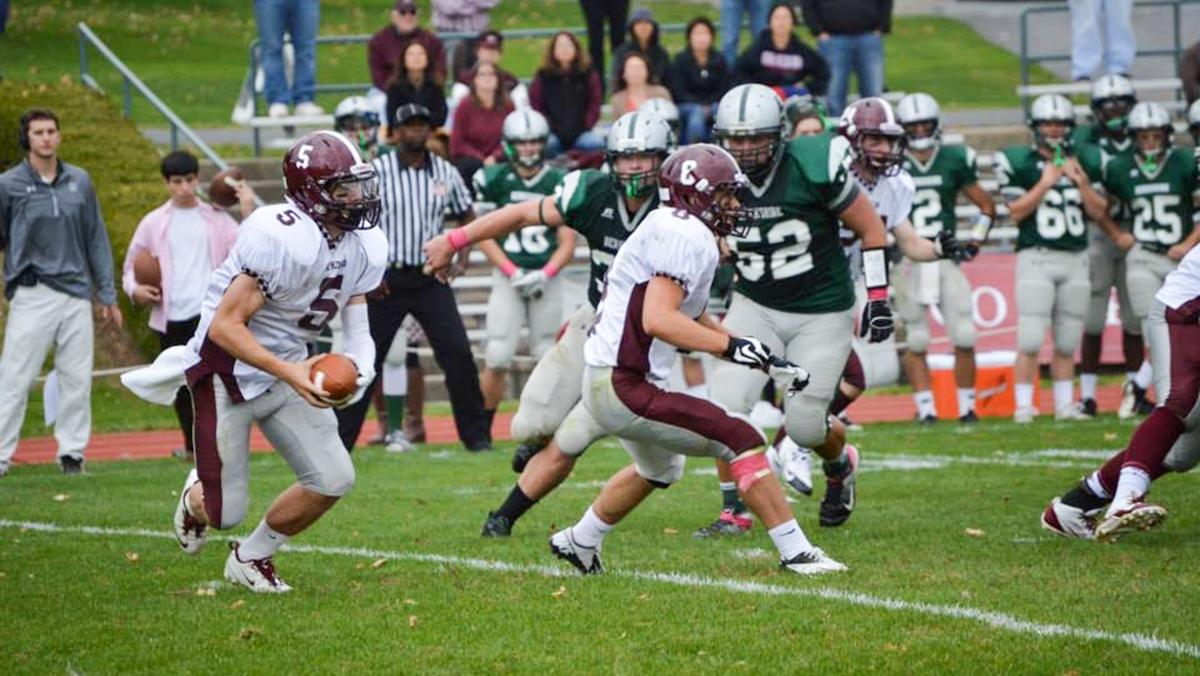 PHOTO COURTESY OF QUINN FERGUSON
Junior Quinn Ferguson plays in a high school football game. He has not played in a game since his senior year of high school.
By Cal Dymowski — Staff Writer
Published: September 9, 2016

For the first time since his senior year of high school, junior Quinn Ferguson is putting on pads and a football jersey, after deciding in the spring to walk onto the Ithaca College football team.

This is the second time Ferguson has walked onto a varsity athletic team at Ithaca College. Ferguson hasn’t played organized football since his senior year at the Hopkins School, a college preparatory school in New Haven, Connecticut, where he served as the team captain and played quarterback and cornerback.

During his freshman year at the college, Ferguson joined the baseball team midway through March, after the season had begun. He saw action in a few junior varsity games.

He was invited back to the baseball team the fall of his sophomore year, but he declined the offer because he didn’t feel he was ready to make a commitment to collegiate athletics, he said.

In January of his sophomore year, Ferguson said, he started to miss being a competitive athlete. When spring rolled around, he decided it was time to go back to football yet again.

“I missed playing sports a lot,” Ferguson said. “It was a combination of an internal motivation and having a lot of friends on the team. Guys said, ‘Give it a shot, and if they take you, you’re in.’ I talked to them for a bit. Next thing you know, March came around, and I joined a week late after having a meeting with [head coach Mike] Welch.”

Ferguson said he was recruited out of high school to play football at the college but that he declined the offer because he believed it would take up too much time.

“He has athleticism,” Mrozinski said. “He has some intangibles that you can’t necessarily coach and that you hope to get out of a player.”

Junior linebacker Kenny Bradley, a veteran defensive player on the Blue and Gold, said Ferguson kept up well with the other players during preseason.

“He came in, and right away, he was working hard,” Bradley said. “He’s showed some sparks of promise. He has a lot of talent.”

“It’s not easy,” Ferguson said. “I’m really starting to understand what it’s like to be a collegiate athlete. I have a lot of friends on different teams, and I’ve heard their struggles before, and now I can really relate to that.”

Ferguson will be playing cornerback this year, a position that the team lacks depth in and one that he says fits his physical attributes that he brings to the team and the game.

Mrozinski said despite Ferguson’s rediscovering the game, he is fitting nicely into the schematics of the defensive backs.

“Now, it’s him trying to shake the complete rust off, from a full–game standpoint, but it’s there,” Mrozinski said. “There’s flashes of him doing things very well, but there are times where it’s not so well. It’s a consistency thing at this point. But he has a chance to contribute. Whether that be this year or next year, I don’t know. That’s on him.”

Ferguson said it was tough to relearn the plays of the defense after being out of the football mindset for so long.

“You have to pick up that stuff quickly,” Ferguson said. “I had a little bit of a head start playing in the spring. We installed some stuff in the spring that we relearned in camp, so that was great. It helped me out.”

Mrozinski said Ferguson has come a long way in his progression from the spring workouts to now.

“Since day one, he’s been immensely better,” Mrozinski said. “That, from my standpoint, is great to see. Knowing what we do in a game plan, there’s a lot to it. There’s a lot of intricacies involved and a lot of new techniques that he’s had to pick up with the other guys.”

Ferguson said he hopes to be back on the gridiron again this time next year.

“The coaches are always constantly evaluating you,” Ferguson said. “Hopefully, I get called back after this season. That’s my goal: work hard and help this team win football games.”