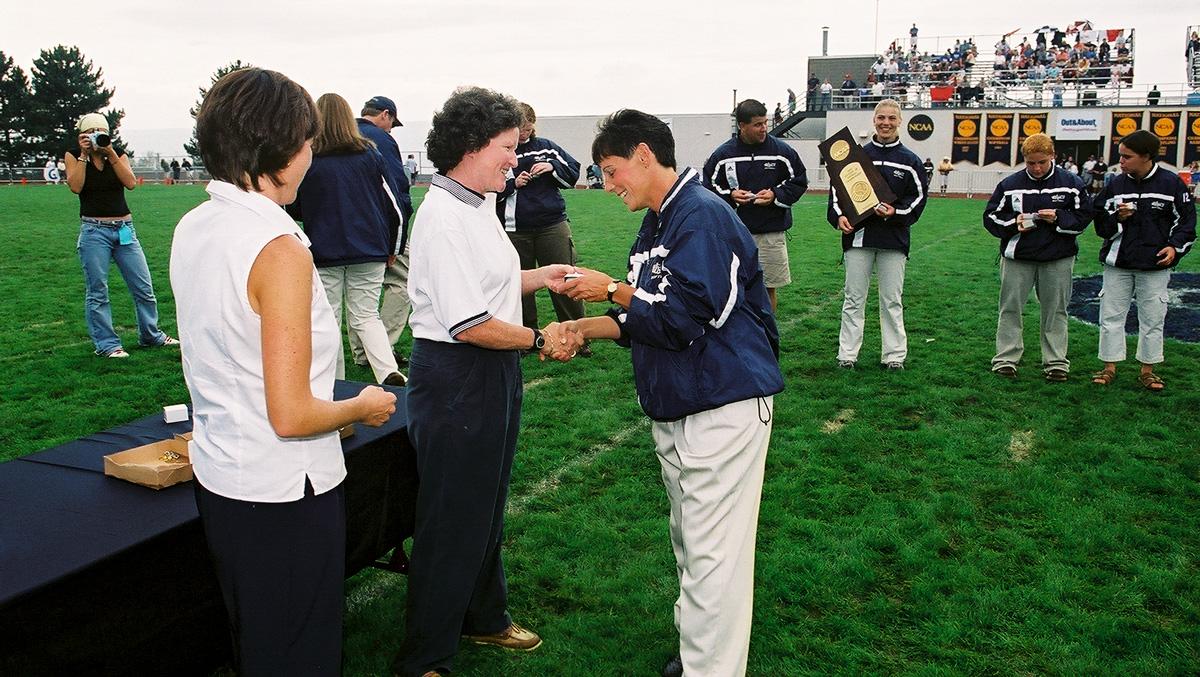 There were two outs in the bottom of the seventh inning during the softball Empire 8 Championship on May 8, 2016. The Ithaca College Bombers were down 2–1 against the St. John Fisher College Cardinals, and Bombers outfielder Erin McQuillan ’16 was up to bat but had not had a hit in four games against the Cardinals’ pitcher, then-sophomore Lindsey Tyler. McQuillan hit a line drive to the outfield, and two runners scored to win the game and the championship.

Softball head coach Deb Pallozzi said that moment is one of her favorite memories from coaching because McQuillan was struggling.

“She broke her hand as a freshman, had to get surgery again in between freshman and sophomore year, so she was hurt for two years,” Pallozzi said. “Against Fisher, she was zero for that pitcher, but she went up with a different attitude, a different mindset — just get a hit — and she did, and she won the game for us.”

Since 2001, the first season in which the Empire 8 held league championships, Pallozzi has won 10. This season marks Pallozzi’s 30th season as head coach for the Blue and Gold. She joined the softball staff as a graduate assistant under head coach Jane Jacobs in 1988 and became head coach in 1989. Pallozzi’s only losing season was 1989, and she currently has an 840–397–1 record.

Her team has made it to the NCAA tournament 23 times, including nine championship games. She has won one national championship, in 2002.

Pallozzi graduated in 1979 from SUNY Cortland, where she was an outfielder and a pitcher on the softball team. Before coming to the college, she coached at Columbia High School in Columbia, New York; the University of Missouri in Columbia, Missouri; University at Albany in Albany, New York; and Rensselaer Polytechnic Institute in Troy, New York.

In 2002, the softball team won the program’s first national championship, defeating Lake Forest College 1–0 in game two of the series.

Pitcher Abby Hanrahan ’03 said winning the championship was a great way to show Pallozzi how much she meant to the team.

“I always go back, and Deb introduces me and any of the other girls on the team as, ‘This is the girl on the championship team,’ so I feel proud that she is proud of me, that we won it,” Hanrahan said.

Pallozzi said she tries to show the students they are important by having an open-door policy for her office and by caring and listening to everything that is happening in their personal lives.

“I’ve always had candy to bring them in, but now they just come,” Pallozzi said. “We get to talk to them and joke in the office. We get to know each other. As much as they get to know me, I get to know them.”

Senior pitcher Payton Cutting said Pallozzi has been influential over the past four years and has made being away from home easier.

“I’m always in the office and talking with her,” Cutting said. “I can talk to her about life, about softball, about anything. She reminds me of my mom, and she’s like my mom away from my mom.”

Cutting said that when her grandfather passed away over spring break, Pallozzi had her back and told her to take the time that she needed to grieve.

“She was the first person to come over and just held me for I don’t even know how long,” Cutting said. “It’s those moments that your coach is more than just your coach. She’s family.”

After playing for four years under Pallozzi, Hanrahan said Pallozzi helped her become more mature, taught her how to take ownership of herself and to realize how her attitude can impact the rest of the team.

“She taught discipline really well,” Hanrahan said. “I thought all the little traditions that were insignificant in the way of time made a huge difference in the way we thought of ourselves.”

Softball assistant coach Rinae Olsen said she wanted to coach at the college because of Pallozzi. Olsen played softball at Utica College and said that every year her team would be crushed by the Bombers. When Olsen got the job, she said, she was extremely nervous to work with Pallozzi because she knows that when it is time to play, Pallozzi is only focused on softball.

“My very first day dragging the field on the buggy, I ripped home plate, so I had to tell Deb when she got to practice that I ripped the plate,” Olsen said. “That kind of set the tone for me for my first year.”

Olsen said that after realizing how much Pallozzi cares about everyone and how different Pallozzi is off the field, she was less nervous.

“People see that Deb, and they think that’s how she is all the time, but she’s not,” Olsen said. “She’s a very fun, light spirit in the office. It’s having that personal connection with everyone, and Deb does a great job with that.”

In December 2011, Pallozzi was inducted into the National Fastpitch Coaches Association Hall of Fame and chose pitcher Nicki Donlin ’97 to give her induction speech because Donlin was her first All-American.

“It was really an honor to one, say thank you to her, and two, acknowledge everything that she has done for softball, Division III softball and for Ithaca,” Donlin said.

Donlin said Pallozzi is a great coach because of how much she cares about teaching the game and seeing the players succeed both on and off the field.

The hall of fame ceremony came at a difficult time in Pallozzi’s life. When she found out she was nominated in December 2010, the first thing she did was call her mom, who later died in August 2011. The ceremony was in December 2011.

“The actual ceremony and being recognized by your peers as someone who is worthy — that’s huge,” Pallozzi said. “It’s beyond anything you can wrap your head around. Getting up there and speaking in front of 1,000 people, that’s huge. Not having my mom there was very difficult, but the NFCA makes it a real special evening.”

Pallozzi has also been inducted into the college’s and SUNY Cortland’s halls of fame for her accomplishments as a player and as a coach.

When Olsen recruits players from across the country and goes to the NFCA conference, she said, people know of the college’s softball program because of Pallozzi.

Hanrahan said Pallozzi means so much to the program and to softball because of how long she has been at the college and all of her accomplishments.