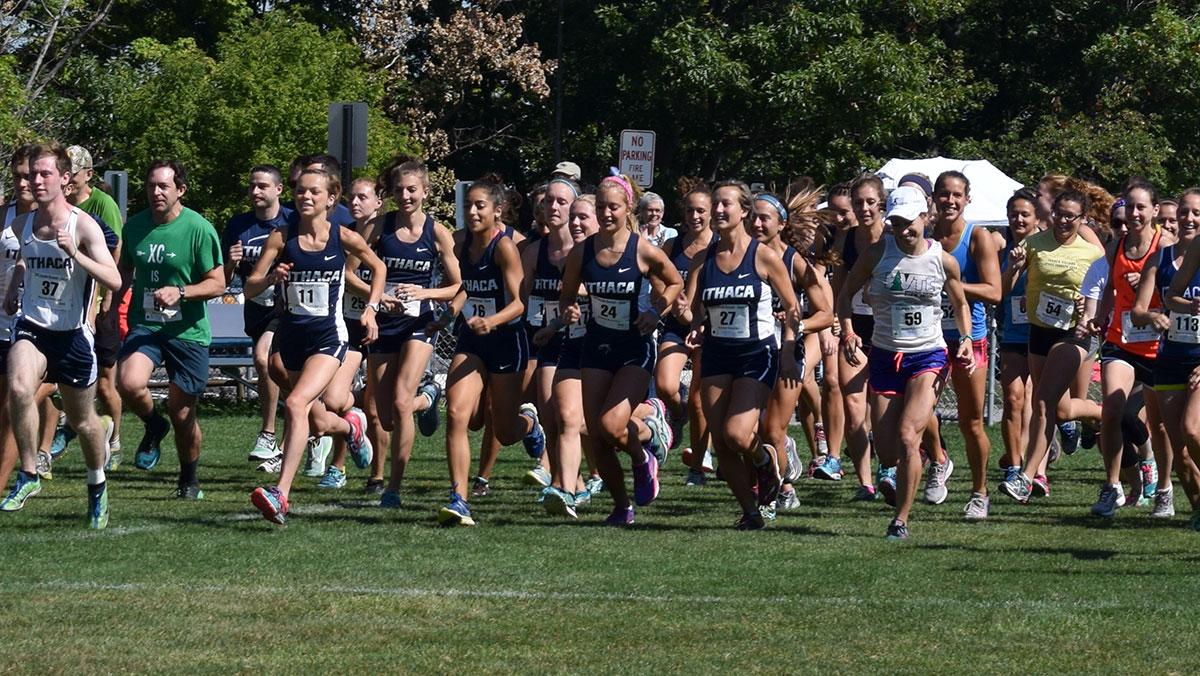 On Sept. 3, approximately 110 alumni and members of the Ithaca College men’s and women’s cross-country teams ran  in the annual Jannette Bonrouhi-Zakaim Alumni Run on the Upper Terrace Field to pay homage to Bonrouhi-Zakaim ’90, who died in 2000.

Bonrouhi-Zakaim successfully led the Blue and Gold to top-five finishes multiple times in the NCAA championships. She became a six-time All-American athlete in track and field and a four-time All-American in cross-country. She ran her way into the Ithaca College Athletic Hall of Fame in 1996.

Senior captain Sean Phillips won the race and ran the second-fastest time ever recorded on the course. He said he was ecstatic with the outcome of the race and that he felt strong running.

“I’m really happy with how I ran — felt nice and smooth — I was just wearing trainers,” Phillips said. “It was nice and smooth and relaxed. I was definitely pushing a little in the end.” 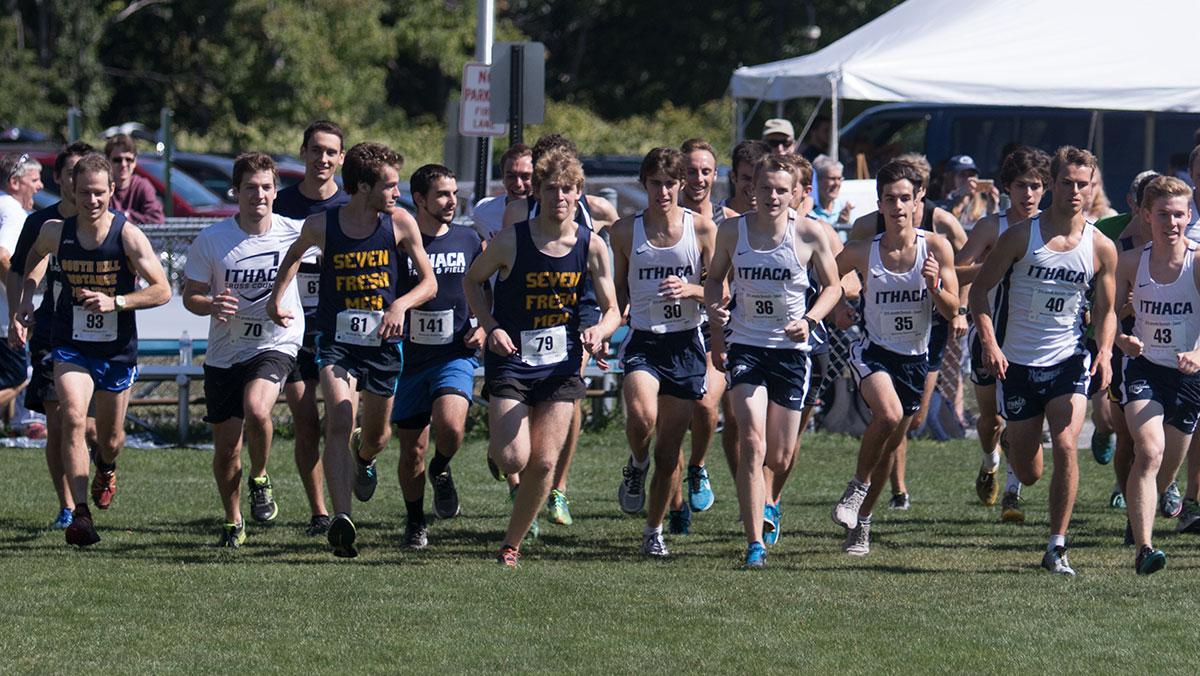 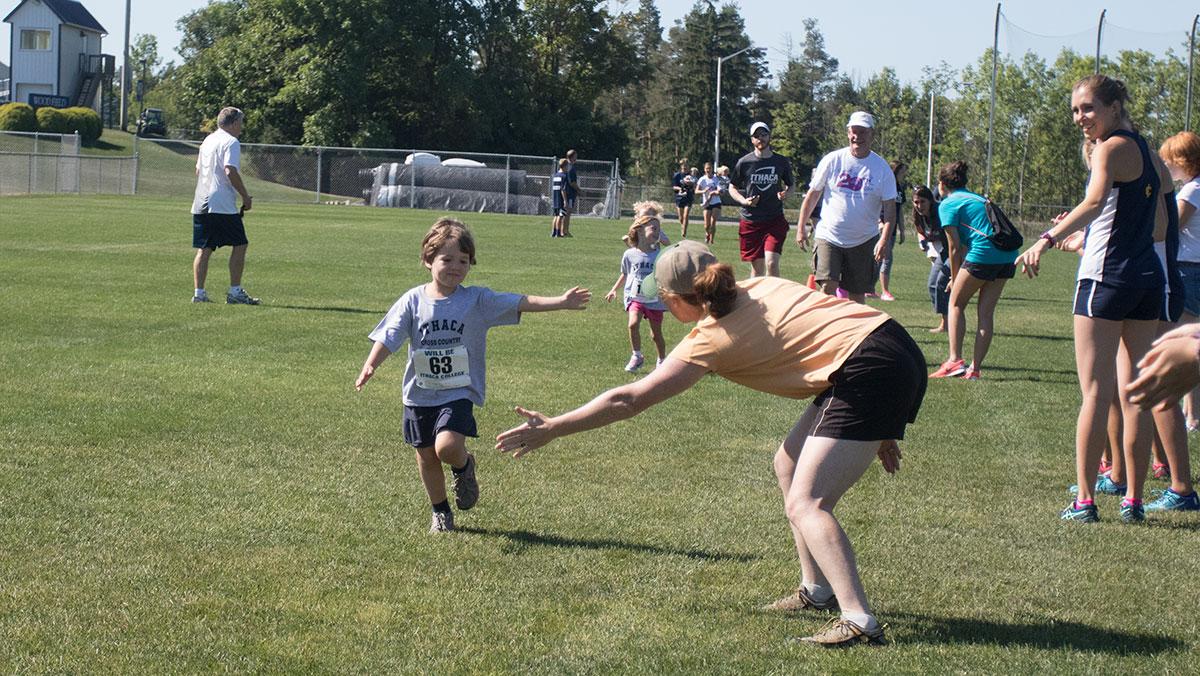 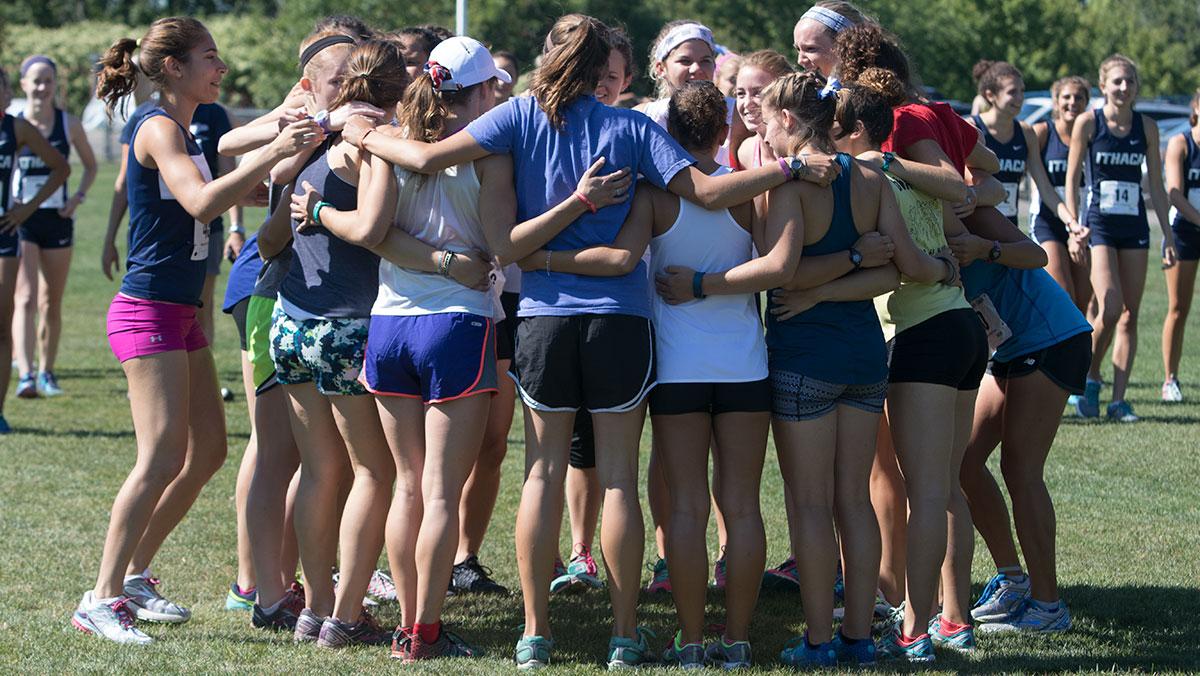 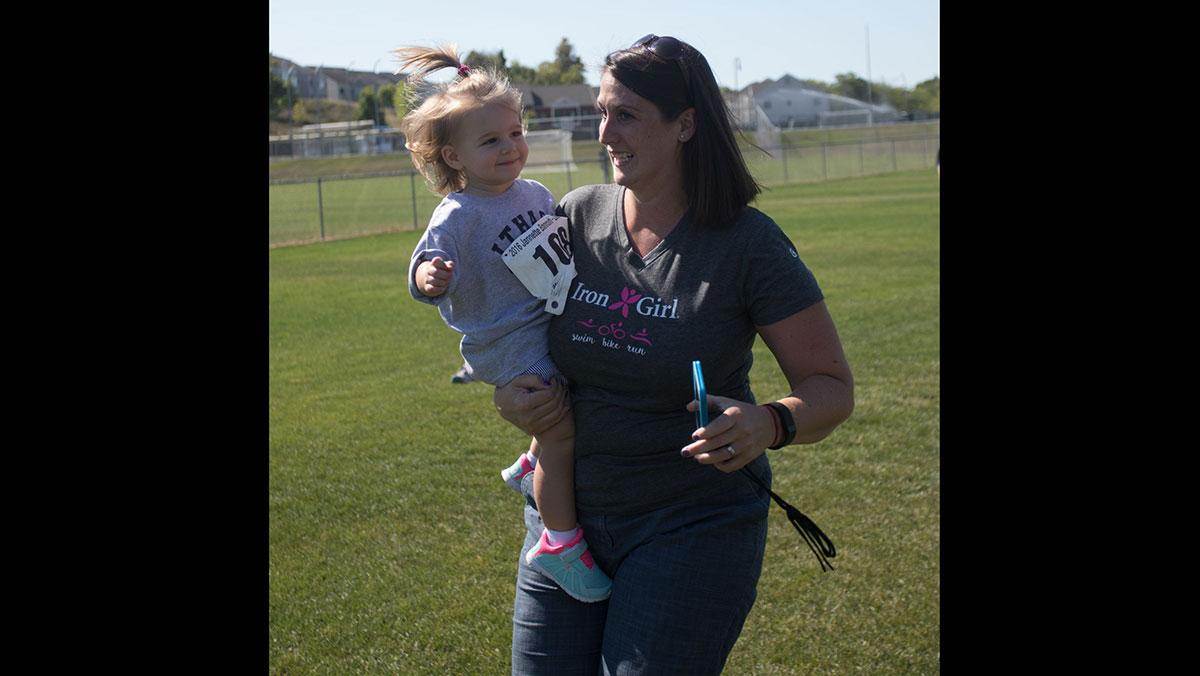 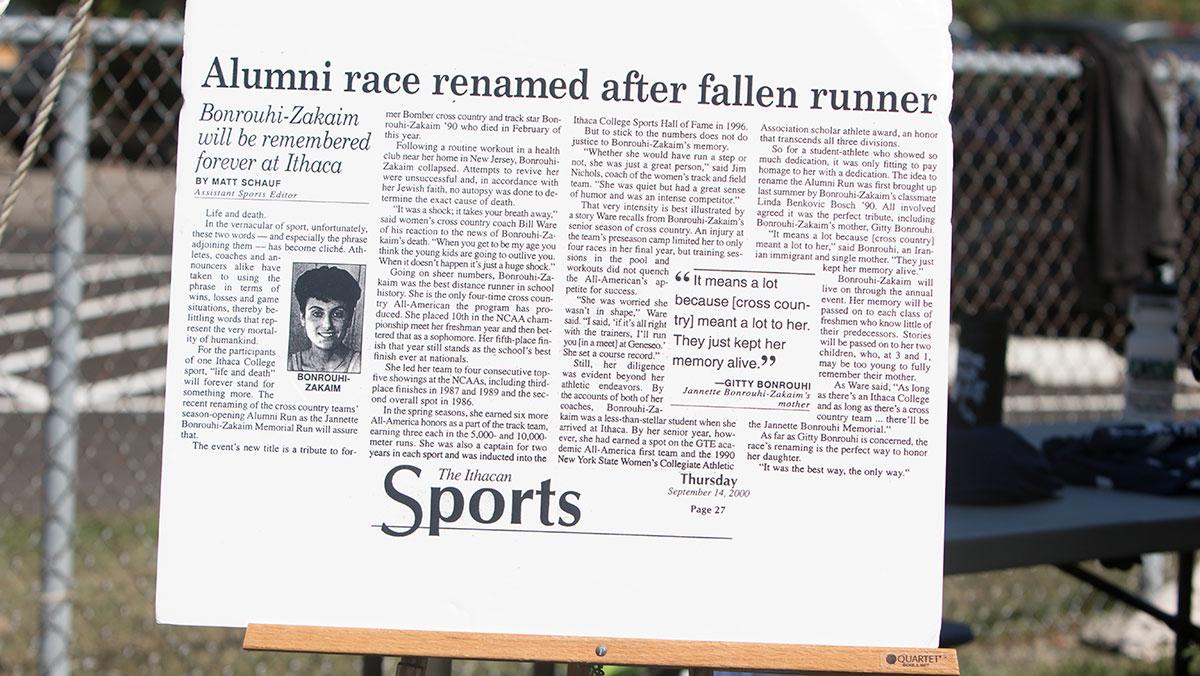 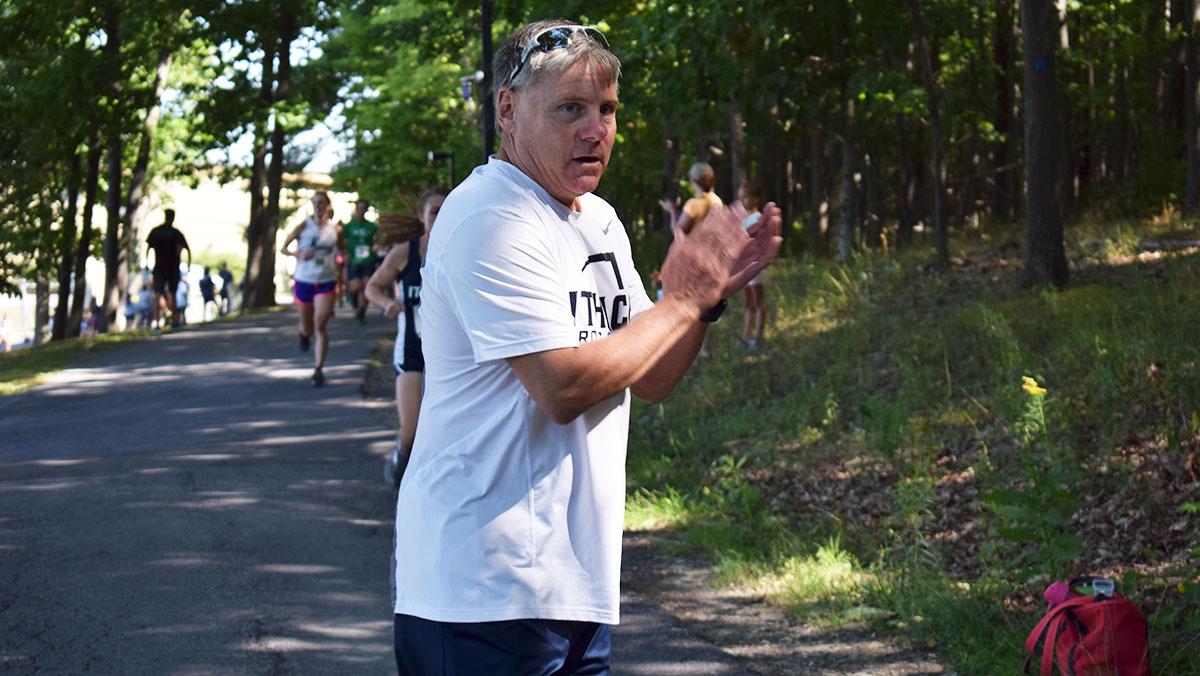 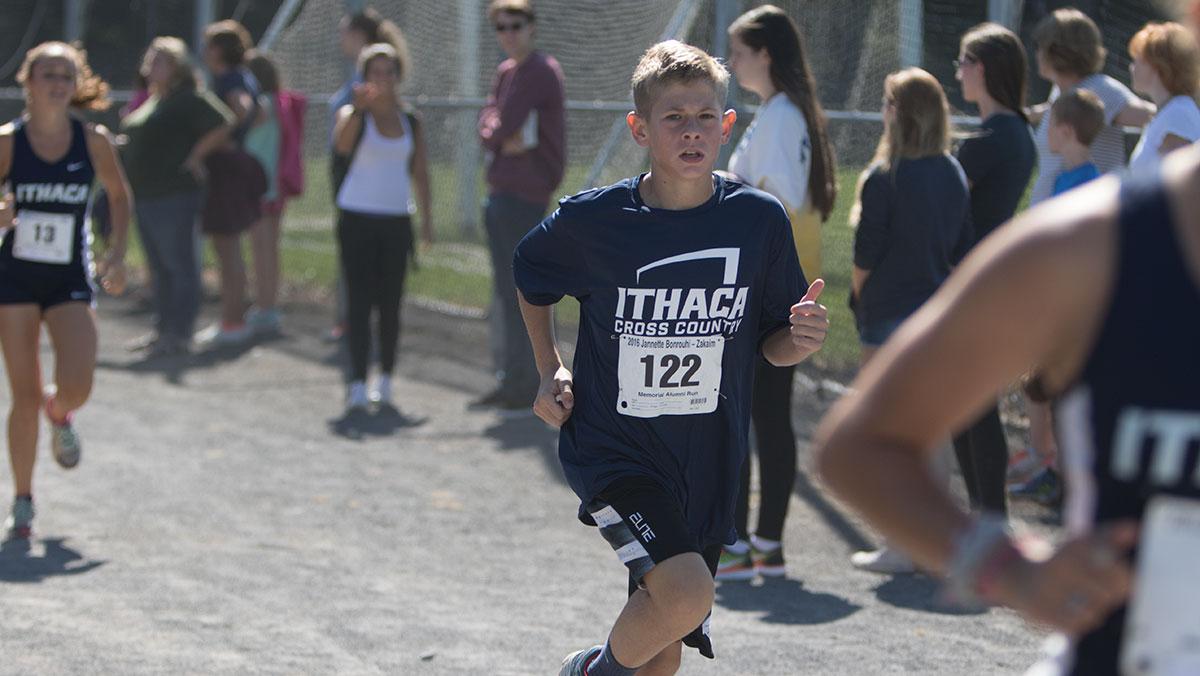 <
►
>
The alumni run is in honor of former Bomber Jannette Bonrouhi-Zakiam, who passed away shortly after she graduated from Ithaca College.

Close behind Phillips was former-Bomber runner Paul Lapre, who finished with a time of 15:55. Stephen Gomez ’15 placed third, crossing the finish line in 16:03.

Junior Taryn Cordani won the women’s race with the time of 17:52. In last season’s alumni race, Cordani’s time was 18:43. She said the race is a great experience for both the current and former Bombers.

“It’s fun to pass alumni and have them cheer for you while running with them, and trying for the best even though whatever happens, happens,” Cordani said.

The groups of alumni were all happy to be a part of the event, as they got to see what their teams have become and what they can be.

“The only reason I do it is because of the people,” Leah Bianco ’13 said. “It’s a common thing that keeps us all together.”

Sawyer Hitchcock ’16, a two-time Empire 8 Conference Runner of the Year, finished eighth. He said his experiences running for the Bombers are still fresh and he is excited for the men’s team’s upcoming season.

“I’m so happy to see everybody and super excited for this team because I feel barely removed from the team,” Hitchcock said. “I’m still very invested in all of them. They are looking good this season after what they did today. I’m really excited to follow what they do.”

Men’s head coach Jim Nichols said he is still surprised by the plethora of alumni who return each year to run the race.

“They come from all over the country, and it just amazes me,” Nichols said. “I sit there and wonder, ‘Why?’ I think the why is they had a great experience at Ithaca College and made great friendships and things that last a lifetime.”