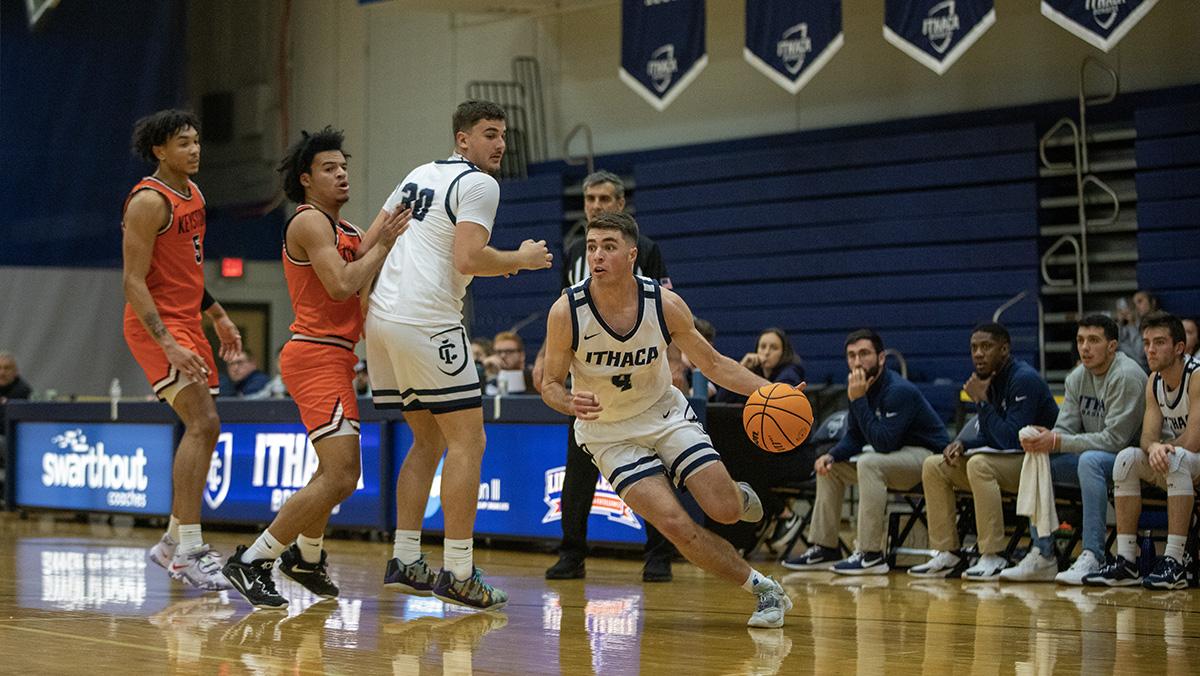 The Ithaca College men’s basketball team defeated the Keystone College Giants in a non-conference matchup by a final score of 95–80 in Ben Light Gymnasium on Nov. 15.

Graduate student forward Luka Radovich was the engine that powered the Bomber offense, leading all scorers with 40 points. Graduate student guard George Sikoryak III chipped in 15 points while shooting 70% from the field. The Bombers leaned on a balanced attack to defeat the Giants, recording 20 assists and 11 threes.

Radovich started the game on fire, recording the first five points for Ithaca the Bombers on a layup and a 3-pointer. The two schools battled back and forth in the first half, and the Bombers finally found some breathing room on two 3-pointers from Radovich with a minute to go up by eight.

The South Hill squad entered the halftime intermission up by twelve, and never trailed in the second half. Giants first-year student guard Javen Flowers-Smith kept Keystone in the game, scoring 16 of his 30 points after the break. Bombers held Keystone to 2–10 shooting from beyond the arc in the second half.

A 3-pointer by Flowers-Smith with 7:40 remaining cut the Bomber lead to just six, but Ithaca responded with a quick 7–0 run to extend the lead back to 10 points. Radovich came up big for the Bombers once again down the stretch, draining three of his seven 3-pointers in the second half.

The Bombers used the strong play of their perimeter defense to close out the game, and in particular that of graduate guard Zach Warech, who recorded four of the Bombers Ithaca’s 11 steals. The contest ended with first-year forward Gavin Schauder scoring his first points as a Bomber on an alley-oop layup.

Radovich credited the coaching staff’s preparation for the team’s home victory and second win of the season.

“Coach put energy and effort on the board at practice yesterday, and I feel that’s what we did tonight,” Radovich said. “We knew what we had to do, and we executed when it mattered.”

The Bombers will next play Cornell University  in an exhibition game at 7 p.m. Nov 18 on the East Hill.