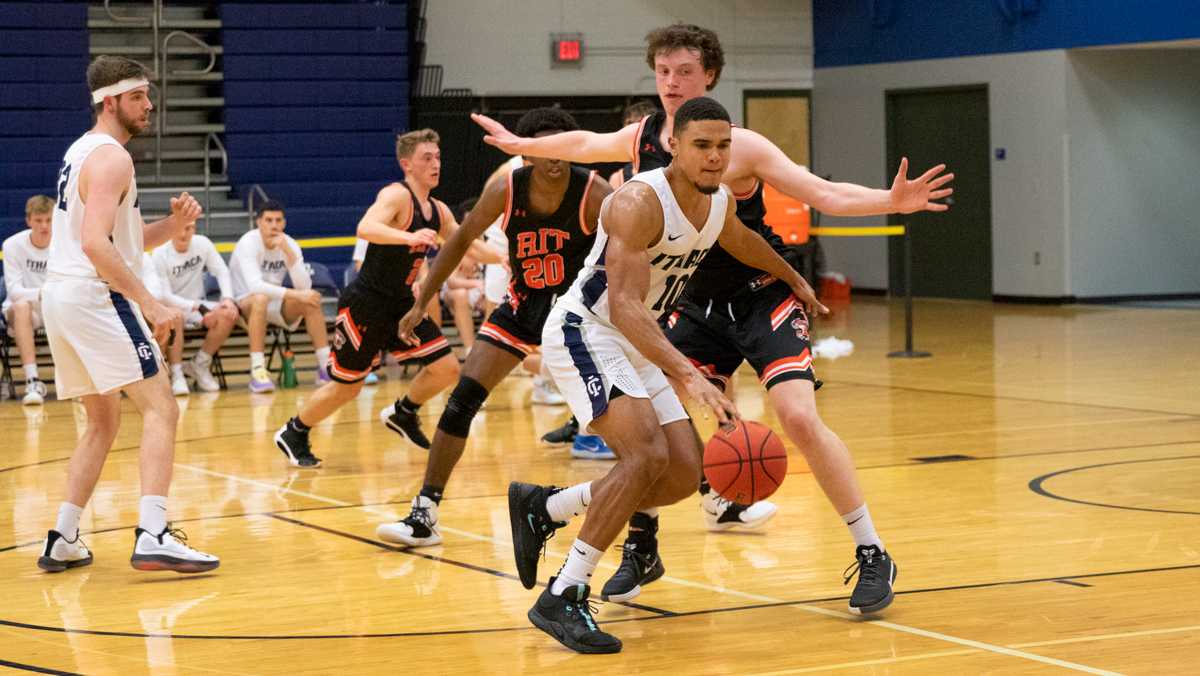 The Ithaca College men’s basketball team dominated Rochester Institute of Technology in a 91–61 victory Jan. 14 in Ben Light Gymnasium. The Bombers are 8–3 overall and 4–1 in the Liberty League after the win.

Senior guard Sebastian Alderete finished as the leading scorer for the Bombers with 27 points. Senior guard Riley Thompson trailed closely behind with 22 points. A majority of the team contributed to the win with 13 players getting minutes on the court and 10 of them scoring. Head coach Jim Mullins said he was especially impressed with Alderete’s performance.

“He was amazing,” Mullins said. “He was really feeling it in the first half especially, and that happens. Sometimes he’ll get on those rolls.”

While RIT briefly held a 5–2 lead in the start of the first half, the Bombers closed the gap quickly and never fell behind again. With just over 13 minutes left in the first half, Thompson sank three 3-point shots within two and a half minutes to put the Bombers up 19–12.

The first half ended with the South Hill squad leading 50–29. Twenty of the team’s points came from Alderete and 15 came from Thompson. RIT’s leading scorer in the first half was freshman forward Kevin Ryan, who only notched 6 points.

In the second half, the closest RIT came to the Bombers was within 19 points. The defense only allowed the Tigers to make three out of 20 3-point attempts during the whole game. The team also kept RIT to just 22 successful field goals out of 72 attempts in the second half.

Despite the strong defensive efforts, three players struggled with fouls. Sophomore forward Alex Barron picked up four personal fouls in just over a minute of play. Junior guard Cooper Macklin also finished the game with four, while sophomore forward Clay Medling fouled out late in the second half.

Mullins said he felt the Bombers did what they needed to do to bounce back after a disappointing loss against Hobart College on Jan. 11. He said he thought the team’s ball movement and rebounding were especially strong. The Bombers had eight offensive rebounds in the first half.

The team still needs to work on its post defense, Mullins said. He said that it tends to get lackadaisical and that it needs to improve on bringing in help defense. The Bombers beat RIT by 30 points.

The South Hill squad’s next game is against St. Lawrence University for another Liberty League matchup at 7:30 p.m. Jan. 17 in Canton, New York.