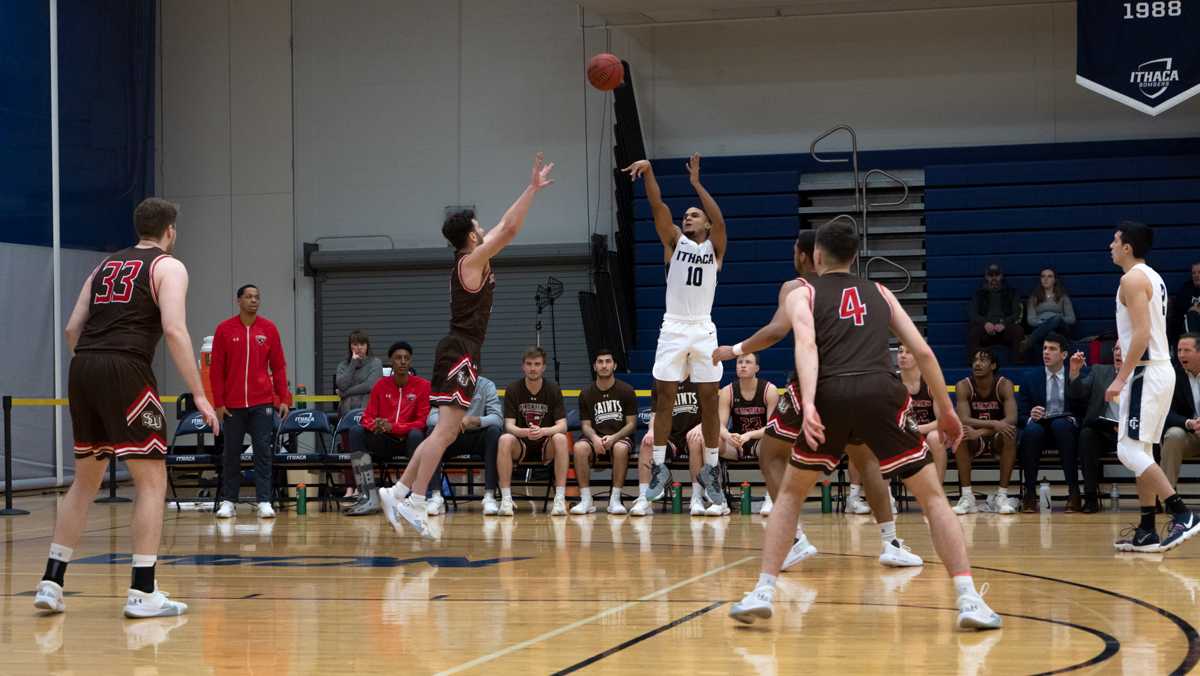 The Ithaca College men’s basketball team defeated the St. Lawrence Saints 98–71 Feb. 15 in Ben Light Gymnasium. With the victory, the Bombers improved to 18–5 overall and 13–3 in the Liberty League.

The Bombers were paced by five players finishing in double digit scoring numbers. Senior guard Riley Thompson led all scorers with a game-high 36 points with 30 of those points coming from three-pointers. He tied the school record in three-point shots made in a single game, which Vince Perrine ‘96 set in 1994. Senior guard Sebastian Alderete chipped in with 22 points. Sophomore guard Skylar Sinon also contributed 8 assists and 14 points.

By the end of the first half, the Bombers only led by 46–40. However, the team continued to hold the lead for the entire second half of the game and won by 27 points.

Junior forward Bryan Karl said he was very happy with the total team effort against the Saints.

“Our goal coming into the game was to beat them down the floor, and I think we executed that well,” Karl said. “Obviously our shots were dropping, and Riley was able to put in a lot of tough threes.”

The Bombers were powered to victory behind very strong three-point shooting. The Bombers shot 19/40 (47.5%) from three, 10 of which came from Thompson. Head coach Jim Mullins was ecstatic about the guard’s performance.

“He’s just a gamer,” Mullins said. “He’s a fierce competitor. He’s gonna bring it. That’s what we know he will bring every game for us.”

The South Hill Squad has now compiled a six game winning streak and have yet to lose in the month of February. The team will welcome Vassar College at 7:30 p.m. Feb 21 at Ben Light Gymnasium.