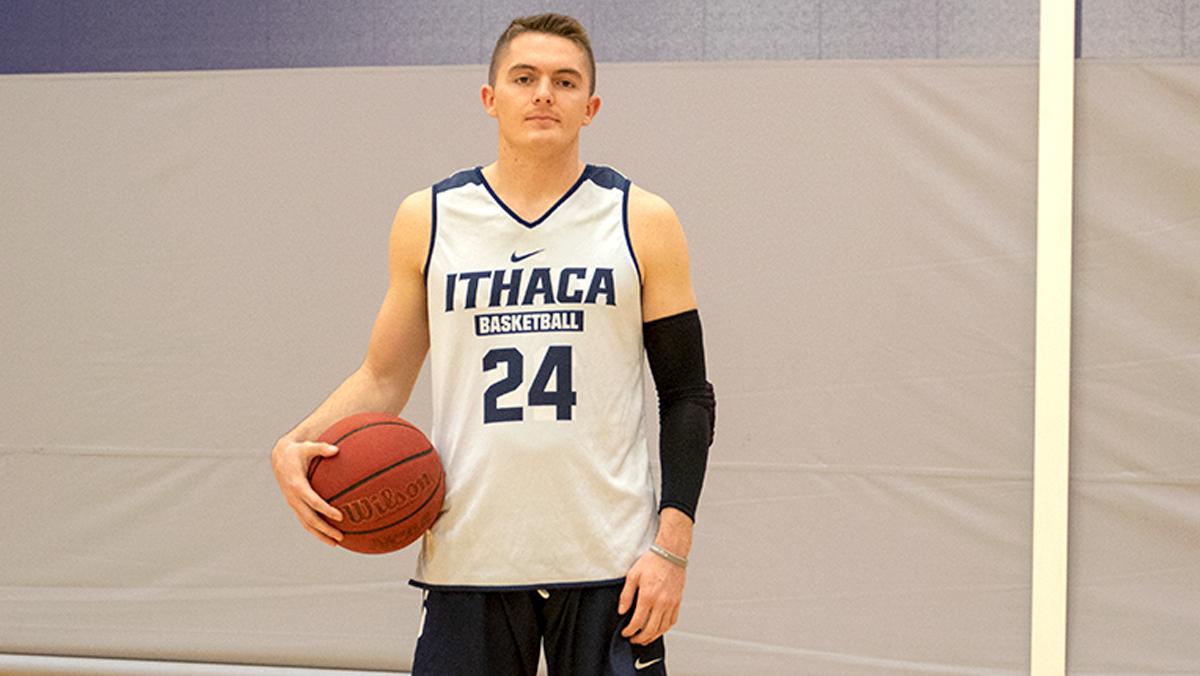 With a year of Liberty League Conference play under its belt, the Ithaca College men’s basketball team is looking to expand on its weaknesses and make another run at the Liberty League Championship.

After finishing with a 9–16 overall record and 5–11 conference record in the Empire 8 Conference during its 2016 campaign, last year’s squad showed improvement, finishing 15–11 overall and 10–8 in its inaugural season in the Liberty League. It is looking to further improve on that record this season.

Head coach Jim Mullins said that this year’s group consists of all but one rotational player, Marc Chasin ’18, and that he is looking for contributions from all players in order to improve.

“It’s not fair to put all the work on one player,” Mullins said. “Our whole team needs to step up if we are going to be successful. We are returning seven rotational players, and we are adding eight freshmen, too.”

The Bombers face a tough out–of–conference schedule this season. Mullins said he has made sure the team will be ready to play teams in the Liberty League by scheduling difficult nonleague match-ups.

“Our nonconference games are tough, too,” Mullins said. “[University of] Rochester is going to be a Top 10 team in the country. Hamilton [College] has the ability to make it to the Final Four. [SUNY] Cortland is also very tough.”

In the South Hill squad’s third regular season game, it will take on Cortland on Nov. 27. Throughout December, the Bombers will face only nonleague teams, including Rochester on Dec. 11 and Hamilton at the Land of Magic Tournament in Daytona, Florida, on Dec. 29.

Mullins also said the Liberty League is expected to be extremely competitive this season.

“All of the conference games this season are going to be entertaining,” Mullins said. “Usually, there are a few teams at the bottom that you can look for wins, but not this year. Every team is tough.”

Some key returners for the Bombers this season include senior forward Pete Ezema, who averaged 8.9 rebounds per game last season. Senior forward Miles Herman had 42 blocks on the season, and junior guard Riley Thompson averaged 13.4 points per game while shooting 41.6 percent from behind the arc.

The Blue and Gold struggled with shooting last season, shooting 66 percent from the free throw line, shooting 31 percent beyond the arc last season and finishing eighth in the Liberty League in both categories.

Herman said improving the team’s shooting is a main focus for the upcoming season.

“Our coaching staff made shooting on the run an emphasis in the offseason, even going as far as to implement a shot chart and a mandatory 2,000 shots a week,” Herman said.

However, one of the Bombers’ strengths last season was their effort on defense. They were ranked No. 1 in turnover margin among the Liberty League with a +2.85 margin per game. They also finished No. 2 in steals with 7.5 per game and No. 3 in blocks with 3.62 blocks per game.

“My sophomore year, we were near the bottom in defensive points per game in all of Division III,” senior guard Matthew Flood said. “Guys in the program took that to heart, and since then we have made great strides on the defensive end. Also, it’s a plus having a 6’8” athletic center to anchor our defense in Miles Herman. I think, with our personnel this year, we can make yet another leap in our defensive statistics.”

The South Hill squad will look to senior leadership and its depth in the roster as well as its defensive prowess to make a return to the Liberty League tournament.

“As clichéd as it sounds, I think our biggest strength is our personnel,” Herman said. “We’ve got a lot of talent, particularly among our starters, and if we play to our level, there’s not a team out there that can hold us.”

Flood said that, although confidence is key, this season will be a challenge the team welcomes day in and day out.

“We recognize how competitive the Liberty League is,” Flood said. “No team is able to simply show up and defeat their opponent. Every night we have to outwork the opposition. … We can’t overlook any league matchup.