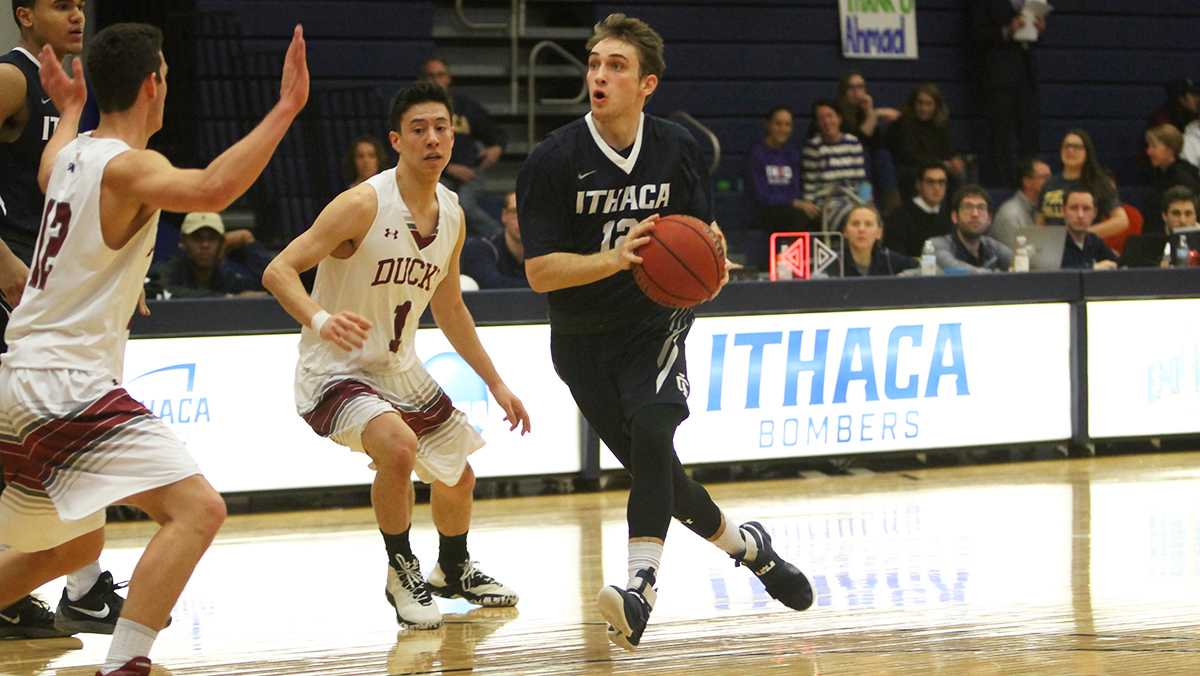 The Ithaca College men’s basketball team lost to Stevens Institute of Technology Ducks 98–88 for their sixth straight loss. The Bombers fall to 6–15 for the season with a 2–10 record in Empire 8 play. With the win, the Ducks improve to 16–4 and 10–2 in Empire 8 play. Prior to the game, the team honored assistant coach and senior Ahmad Boyd with his parents in attendance.

“It’s pretty clear playoff implications are probably over, now we are just working on staying positive,” he said.

Freshman Riley Thompson was a bright spot for the Bombers as he poured on 27 points to lead the team. Thompson said Stevens was able to take advantage of the Blue and Gold’s defence.

“We just had some mental lapses on defense, especially at the beginning of the second half,” Thompson said. “We went from a three-point lead to a five-point lead, to down five and they are a really good team so you know they are going to take advantage of that and we just couldn’t quite fight back.”

Head coach Jim Mullins took Rich out of the starting lineup and the offense started to move for most of the first half. Rich said he likes seeing his teammates have the opportunity to start.

Junior Marc Chasin struggled again this game, going 0–2 from deep. Chasin said he tried to attack the basket in order to score points.

“Tonight they were not really helping me a lot so it was hard to get my shot from the line so I tried to attack,” he said. “I don’t know, sometimes you are feeling it and it’s much easier to just let it come to you, but tonight, I just tried attacking the basket so I did that.”

The college’s defense gave up 271 points in their last three games including a game against the Ducks. Chasin said poor defence has been a common theme throughout the year.

“I think we just need to keep working hard and watching film,” Chasin said. “Hopefully over the long term we will be able to fix that problem.”

The Bombers look to get back in the win column for the first time in six games against Elmira College at 8 p.m. Feb. 7 in Ben Light Gymnasium.