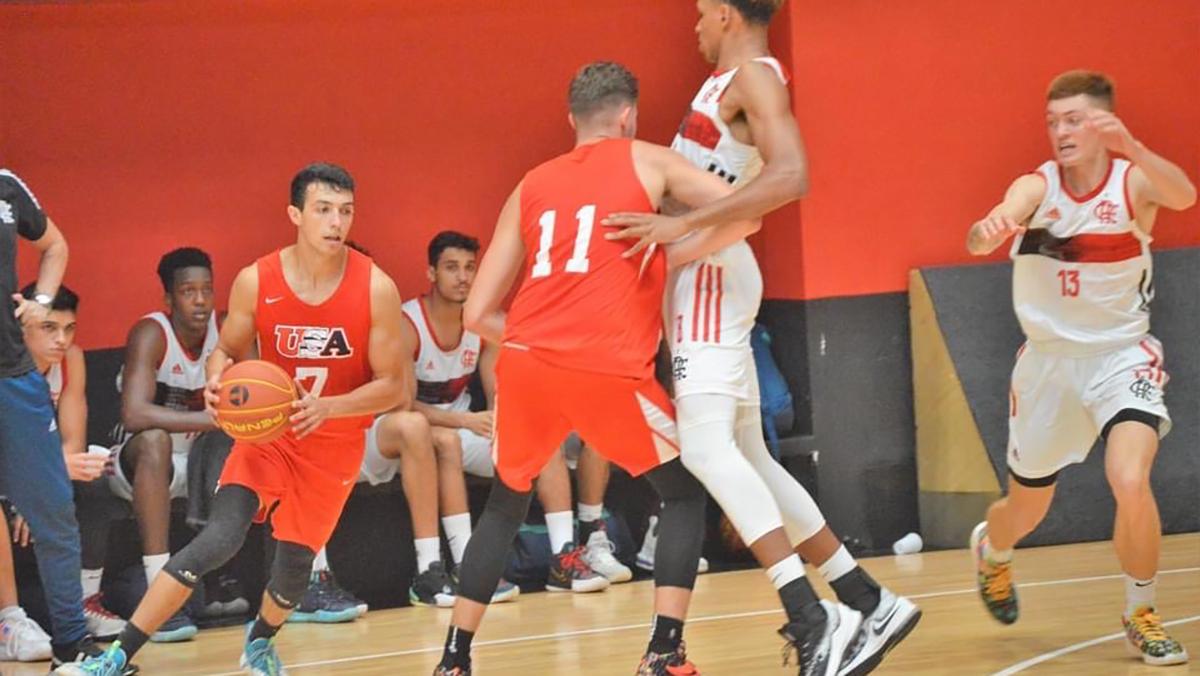 This summer, Ithaca College senior Skylar Sinon, a captain of the men’s basketball team, took his talents to Brazil with the USA Division III men’s basketball team. During his time in Brazil, he had the opportunity to represent his country while competing against national talent.

Sinon was asked to play for the squad after his former coach, Sean Burton, recommended him. The guard competed with the team in a three-game tournament from July 12 to 21. Sinon said he was grateful for the chance to travel to Brazil and experience its culture while developing his basketball skills.

“It was really honoring to be able to play with that group of guys because all of them are really, really talented, great basketball players,” Sinon said. “It was a cool experience being able to play with them and then play overseas and [in] different cities that [I had] never been to.”

The team competed against Brazilian teams during the tournament. Head coach David Golembiowski said he believes that Sinon and the other members of the team will benefit from the experiences they gained, both on and off the court.

While Team USA was composed of just Division III men’s basketball players, Sinon said that the teams they faced from Brazil were made up of players ranging from highschool-age to those who were in their mid-30s. Sinon said he took notice of an increased level of physicality that is present in the game in Brazil, but he said he tried to maintain his approach to competition.

“They don’t really call as many fouls, they kind of let you play a little more,” Sinon said. “There are some of the guys who are clearly older, but you just go out and play, regardless of how big they look or how strong they look.”

While these variations in the game presented new challenges for the team, Golembiowski said he was impressed with how Sinon adapted to this new style of play.

“He really kind of picked up the fact that you really have to be more physical down there,” Golembiowski said. “I thought he held his own guarding bigger and really fast players.”

Sinon was not phased by these differences, making noise in Team USA’s arrival to the tournament, in a 81-46 victory over Sorocaba. The guard played an integral role in the victory, leading the team by dropping 18 points. Golembiowski said that the team relied on Sinon to be a key contributor and that he made an impact on both sides of the ball.

“It was very obvious that he was a very important part of what we were doing down there,” Golembiowski said. “Not only on the offensive end, but on the defensive end as well.”

Sinon compiled 12 more points in the team’s remaining two contests, contributing to Team USA’s 85-68 win against Fluminense in its third and final game of the tournament. Sinon said he believes this experience will help him grow his game, particularly in terms of maintaining his composure on the floor.

Due to the Liberty League’s cancelation of the 2020–21 winter season for the college, the contest was Sinon’s first game action since the Bombers’ 86-78 loss to Swarthmore College in the second round of the NCAA tournament on March 7, 2020. Sinon said he was simply happy to get back on the court and be in a competitive environment again.

“I think that it was a great way to keep me playing during the summer and keeping stuff competitive,” Sinon said. “That was the first organized game I played in about a year and a half because of the whole COVID shutdown, so that was good for me to get on the court again.”

The guard will look to carry over the skills he learned during the tournament to this season on South Hill. Senior Bombers teammate George Sikoryak III said he believes the experience will help elevate Sinon’s game when the squad returns to action this winter.

“Playing against a high level of competition is always good because you really get to see where you stand against some great guys,” Sikoryak III said. “It’s nice to see different faces and just prepare, it’s always good to play. Especially when you’re playing at that high level, it will definitely help out and translate to the season.”

Sinon said that he believes he will benefit from his time with Team USA and that it will allow him to maintain his confidence on the court moving forward.

“Just being able to stay composed in a place like that against a team I’ve never seen before,” Sinon said, “especially with older guys, being able to carry myself well was a great experience for me, as well as trying to adapt to a game.”