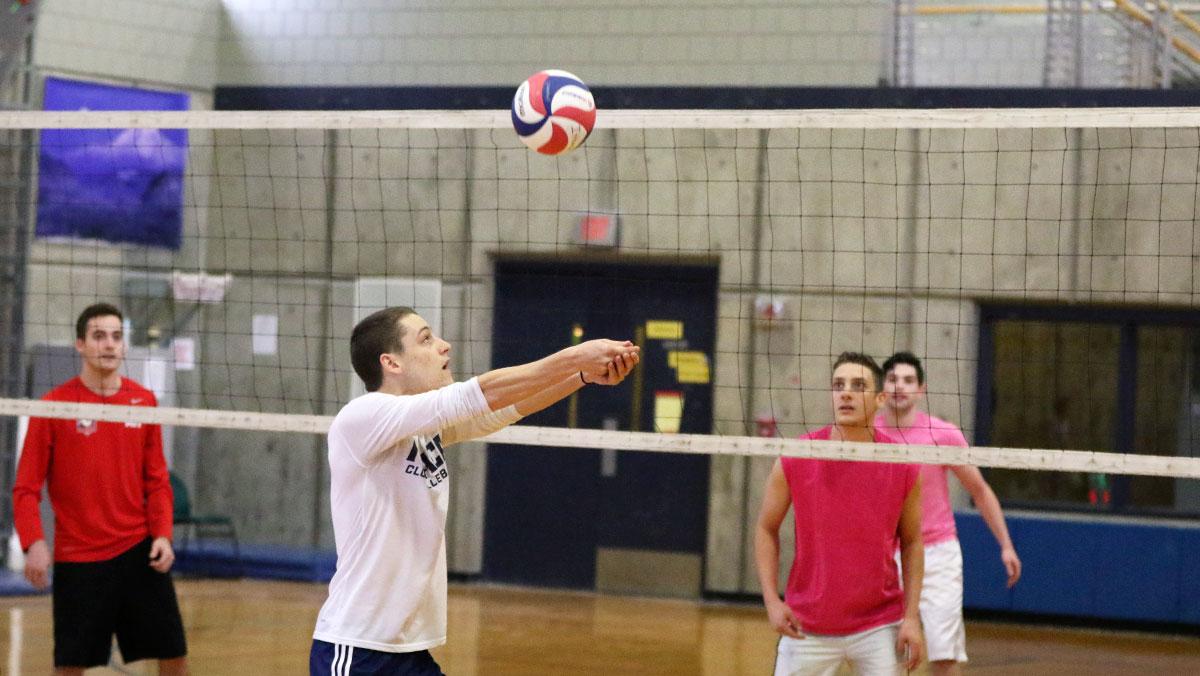 Close to 40 students came out to the Ithaca College Fitness Center on April 2 to participate in the 5v5 Coed Charity Volleyball Tournament hosted by the men’s club volleyball team. All proceeds from the event were donated to 15-year-old Andrew Rosa through the Marty Lyons Foundation.

The Marty Lyons Foundation grants wishes to terminally ill children, ranging in ages from 3–17. Senior Michael Schwartz organized the event and said it is an honor to help grant these wishes.

“It’s a foundation I’ve been a part of for the past five years now as a volunteer,” Schwartz said. “This year, we’re benefiting one individual wish-child who has requested a special chair. His name is Andrew; he’s in his teens.”

Andrew Rosa, who is currently 15 years old, was struck by a car while riding his bicycle May 17, 2010. The collision left Rosa with a severe traumatic brain injury and multiple bone fractures. Since the accident, Rosa has undergone multiple brain surgeries and other hospitalizations due to respiratory failure and pneumonia. The Rosa family has since endured major medical expenses.

All money raised from both the event and the club’s raffle drawings will go toward purchasing a special therapeutic chair for Rosa, which will move his muscles for him. The team’s decision to donate to a specific individual rather than generally to the Marty Lyons Foundation was heavily influenced by Rosa’s giving personality.

The tournament began at 11 a.m. and continued until almost 3 p.m., raising close to $200. This year, six teams came out to play, and entrance into the tournament was $5 per player. The teams competed for hours at the high-energy event and were eliminated after three losses.

Sophomore Shayna DePersia, one of many participants at the event, said she attended the tournament looking for a good time.

“It’s a really nice cause, and it was just a fun way to have fun with my roommates,” DePersia said.

The final four teams standing were seeded according to their records and overall skill level. At this point, the tournament rules changed to single-elimination. The top two teams battled it out in the championship game, and junior Gabe Radoccia-Feuerstein’s team, Setty Wap, came out on top, defeating its opponents 25–17. While Radoccia-Feuerstein and his teammates walked away with a cash prize of $50 to split among themselves, he said, winning was not the main concern for most of the participants.

“We’re raising money to help this kid who is 15 years old,” Radoccia-Feuerstein said. “All of the money we’re raising here is to try to get him a chair. It’s friendly competition. It was really just more fun to play. It was a good time.”

The men’s club volleyball team had also been promoting the tournament across campus for weeks before the event selling raffle tickets. One dollar buys one ticket, which could be entered into any of the following raffles: Bluetooth headphones, a $50 bar tab to Moonies, free bread at Panera Bread for a year, a Brett Gardner signed photo and a Darrelle Revis signed photo. All prizes were either donated by local businesses or by Schwartz himself.

Schwartz said the team will continue to raise money until winners of the raffles are announced at the end of the week. By the end of the tournament, the team had raised close to $300 for the Marty Lyons Foundation, including ticket purchases, and it only expects to raise more before the raffle ends.
“I can’t say the turnout or funds raised from the event were near the goal we were aiming for, but the bottom line is that we, who are fortunate enough to be able to play in a charity game of volleyball, came together for a teenager, just a few years younger than us, who isn’t as fortunate,” Schwartz said. “And we will continue to raise funds in any way that we can to give Andrew something to smile about.”