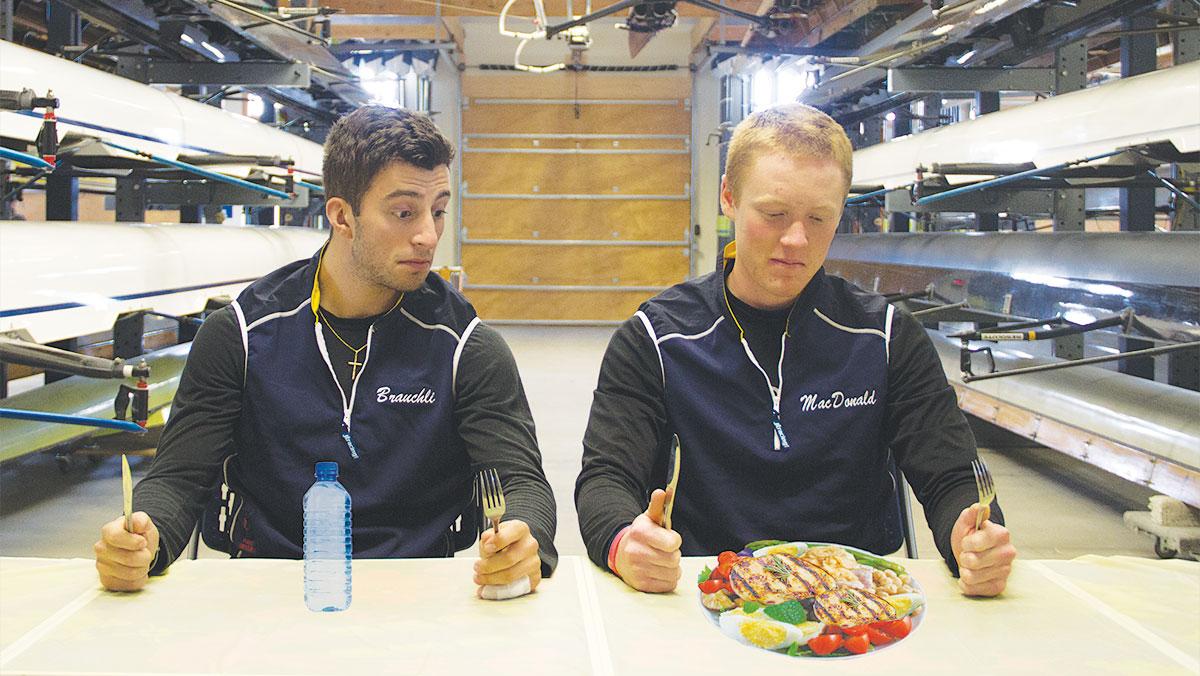 As the sun rose over Lake Lanier in Gainesville, Georgia, on March 14, the men’s crew team dropped its boats into the cool, crisp water for one last practice before the 18-hour drive back north.

Over the week spent at the site of the rowing events of the 1996 Olympics in Atlanta, senior rower Dan Brauchli’s heart-rate monitor recorded that he burned a total of 17,061 calories, and an average of almost 2,500 per day. The intensity of the workouts and training environment posed a situation in which, Brauchli said, the rowers typically ate about twice as many calories as they burned — or about 5,000 per day.

The 255 kilometers — or a little over 158 miles, about the length of a trip from Ithaca to Buffalo, New York — the Bombers rowed in their week down south is something head coach Dan Robinson said could alone equal about half of the total distance the team will row in the second half of its season.

“Spring break is extremely important for us,” Robinson said. “You look at the weather we’ve had, and it’s been impossible for us to get out on the water. Our season could be down to six weeks, which means we’re getting less distance in than we’d like to.”

While the annual spring trip is an extreme scenario for the men’s crew team, the intense training and bad weather in the spring season means both coaches and rowers take nutrition and health very seriously.

Brauchli was introduced to rowing when he arrived on campus in his freshman year at the college. He said over his past four years on the crew team, he has become more interested and aware of his nutrition.

“Before coming to school, I never paid much attention to what I was eating,” Brauchli said. “The sport has made me more conscious of what I’m putting into my body, and because you burn through so many calories, how to properly replenish it.”

The team’s rowers tend not to focus on their weight all that often throughout the season, though their calorie counts are always up due to high-intensity workouts. However, there are scenarios each year in which some who are just above the weight limit — 165 pounds in most cases — need to lose around 5 pounds in less than a week in order to be entered into a lightweight category in specific races.

Before one race in the fall, Brauchli said he had to resort to this extreme and did so by dehydrating his body. By sucking on Jolly Ranchers and spitting into a water bottle throughout the week, Brauchli rid his body of excess water weight until after he weighed in for the race so he wouldn’t have to drastically change his eating habits leading up to it.

“I knew the sugar in a Jolly Rancher or a peppermint or something like that would make you salivate more,” he said. “Once you make weight, you can re-consume all the water and get your body properly hydrated again before your races. In the end it didn’t really end up being an issue, but I just wanted to make sure I wouldn’t end up being over.”

Tom Swensen, professor and chair in the exercise and sports sciences department at the college, said rowing falls under the category of a “high-burn” sport. Swensen said what an athlete eats can make all the difference when it comes to successful training and performance.

“Athletes burn calories based on the physical demand, and the higher the volume, the greater the need for calories afterwards,” he said. “In sports like rowing with high-volume aerobic training, you need to make sure you get enough carbs. With a carb-poor diet, you might become glycogen depleted. In both aerobic and anaerobic sports, a person also needs to make sure they are getting a sufficient amount of protein because with inadequate protein, muscle repair may be compromised. In both cases, performance over time will decrease.”

He also said a poor diet along with inadequate recovery time can cause many athletes to experience overtraining syndrome, where the athlete will do more work than his or her body can handle. Athletes will usually experience symptoms like fatigue, headaches, moodiness, an increase in illnesses, a decrease in appetite and frequent injuries.

While the Blue and Gold’s rowers’ main concern is not their weight, a coxswain is the opposite, as he or she needs to be as light as possible. Serving as the brain of the boat, the coxswain plays an extremely important role in the sport, but physically serves no purpose. This is why they generally tend to be short, light women.

Sophomore Johnston Tucker is the lone male coxswain on the men’s team. A rower at his high school in New Canaan, Connecticut, Tucker transitioned into his current position after an illness caused him to lose weight before he arrived on campus in his first year.

He currently sits at 135 pounds, 5 pounds over the minimum 130 pounds needed serve as a men’s crew coxswain. However, he said this is something that doesn’t concern him at this point in the season.

“It is good to be lighter as a coxswain, but two of the guys who coxed last year were pushing 160,” he said. “I like to try to maintain my weight as much as possible by doing cardio. Sometimes I’ll run, and I get bonus points if I do a piece on the erg with the guys. Coach hasn’t said anything to me about my weight, so I’m fine.”

While Brauchli said feeding your body is an important part of being a powerful, healthy rower, there is another side to the sport that can’t be read by numbers on a heart rate monitor. For both coxswains and rowers alike, mental health plays a huge role in performance in the sport of rowing.

In addition to nutrition, there are three methods that Swensen said can be very effective on positive mental health in rowing, which include visualization, realistic goal setting and positive self-talk.

Tucker as a coxswain, and Brauchli as a rower have experienced each of these, in some manner, in their training. Part of Tucker’s job as a coxswain is to prepare a race plan for himself and the men in his boat, which they visualize and discuss before their boat touches the water. There are scenarios where either the individual or the team will set goals both on the erg and in the water, whether it be in time or distance. And before practice every day, rowers reflect on their own affirmations.

Robinson said it is not the training that leads to his rowers getting hurt or sick, but it is the lifestyle they live by that can impact their performance on the water.

“If you’re training two hours a day every day, that’s nothing compared to what an Olympic athlete might do,” Robinson said. “They train six to eight hours a day — it’s crazy. When you have bad performances sometimes, it can be because three of the eight guys in the boat pulled an all-nighter Tuesday night. You don’t always know what’s going on in their lives.”

Success shows in numbers on the erg and pieces in the water, which can be impacted by what a rower surrounds himself with. And no matter what may be impacting his personal performance, Brauchli said he always aims to progress, both in the water and through his nutrition and mental preparation outside of it.

“There’s really no way for you to take an off-stroke without your teammates or your coach knowing,” Brauchli said. “It really pushes you to make sure you’re at your best. And if you’re not at your best, you have that number you can beat the next day.”