Men’s crew will depend on new rowers 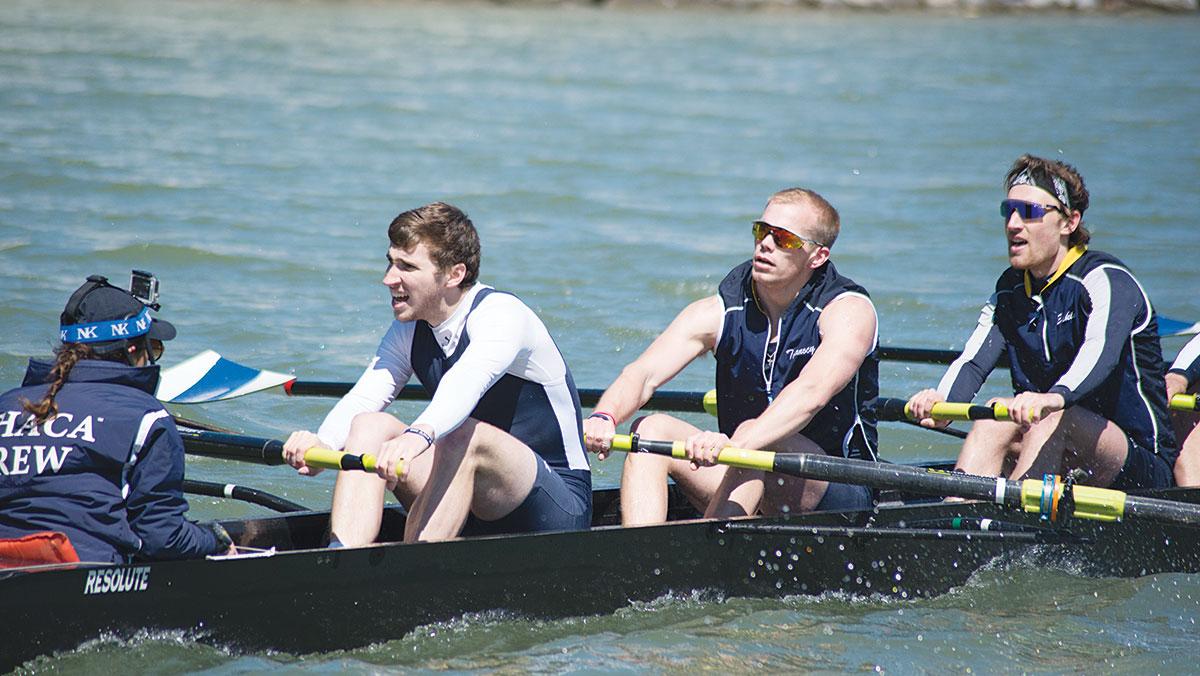 After finishing the fall portion of its season with multiple first- and second-place finishes in the Frostbite Regatta and the Bill Braxton Memorial Regatta on Nov. 7–8, 2015, the Ithaca College men’s crew team looks to do as well, if not better, in the spring portion of its season, despite its reduced roster.

Beginning in March, the squad looks to compete against talented schools such as Cornell University, Hobart and William Smith College and the University of Michigan.

“A lot of the schools we do face, at least during championship season, are DI or DII, larger programs,” senior captain Branden George said. “What sets us apart is that we’re a smaller school, and we usually show up and put up a good fight and win some big races.”

Sophomore Stephen Cadoux said being a smaller school allows the men to have more of a family dynamic.

“We have a smaller number, but we are getting results we’ve never gotten before, so I think that the smaller-team dynamic means we are all much closer and all better friends,” Cadoux said.

The staff — composed of head coach Dan Robinson, assistant coach Luke LaPoint and volunteer assistant coach Ward Romer — hope to lead the Blue and Gold to several top-place finishes in the spring portion of their season.

Once Cayuga Lake thaws this spring, the squad will be out on the water practicing and rearranging its boats. Last year, the squad lost 10 graduating seniors who were responsible for much of the team’s experience, depth and horsepower, mainly in the varsity eight boat. Because of this huge loss, the team is only about 60 percent the size of last year’s team.

George and juniors Alex Martin and captain Johnston Tucker are the only three returning members of the varsity eight boat. Robinson said he is really excited to have the five seniors to step up and lead the team this season.

“It encourages me every single day to walk up, step up and show what I got,” Cadoux said.

On the other hand, Cadoux also said George is more of a quiet leader and leads by example but that he has been making a slight change lately.

“He’s been giving us some preworkout speeches, and that’s really helping us a lot,” Cadoux said. “He’s really taken off and has expanded as a leader, which is helping us expand as a team.”

The squad’s loss of experience hasn’t seemed to affect the men as a team. Although the team may have lost a couple of strong key members, Robinson said his rowers continue to focus on their goals and stay motivated.

“I think they know they wouldn’t be competitive if they didn’t work at it,” Robinson said. “They have to be hungry.”

With juniors William Brown and John Posca returning to the team from studying abroad, and Cadoux, sophomore Jason Tessolecki and freshman Josh Mitnick coming back from injuries, Robinson said he expects the squad to progress from last year’s performance.

Not only does the squad have regattas to prepare for, but it also must get ready for the first Bomber Blue Clinic. In an attempt to recruit future rowers, the Bombers will be holding a clinic for high school juniors and seniors. The clinic will include instructional rowing sessions, meetings with both athletics and admissions staff and a campus tour. The clinic will be held April 17.

The team will use its smaller roster to its advantage this season in its upcoming regattas, as Cadoux said he has already paid dividends for the Bombers.

“I can already see some increases in speed that I never thought was possible,” he said. “The second half of the fall up to now has just been a huge increase, and I’m very happy about that.”