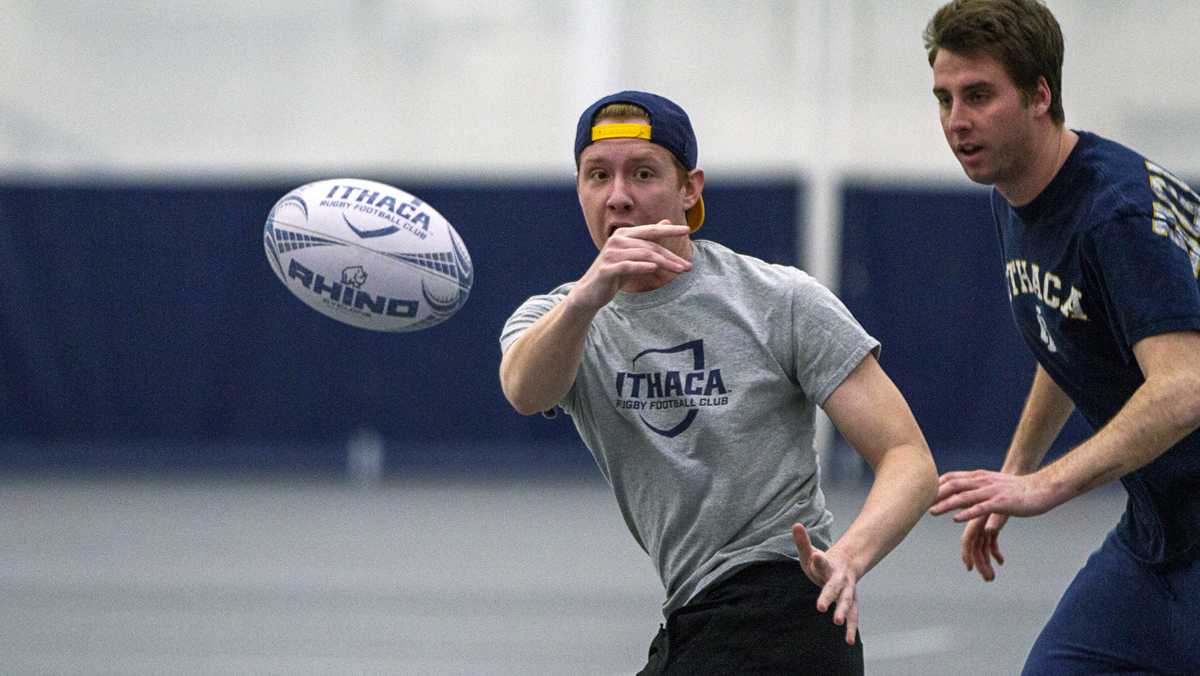 When the sun rises at Ithaca College, the men’s rugby team is already wide awake and gearing up for a two-hour practice at 6 a.m. on the Higgins Stadium turf. The team practices four days a week to prepare for matches against colleges from around the country, including varsity and Division I programs.

While they are a dedicated group, the team is not classified as a varsity sport. Since its reinstatement in 2010, the club has performed exceptionally well, winning the Upstate Small College Rugby Conference several times, most recently in Fall 2018. They have also competed at the National Small College Rugby Organization [NSCRO] National Championships. In the fall, the team finished 10th overall during the tournament after an undefeated regular season.

Head coach Annemarie Farrell has been with the team since 2009. When she first got involved, the team was not even connected to the college, as it was banned in 1994 after developing a reputation for hazing and rowdy parties. Farrell said she saw the potential of the players and is now proud of the culture the squad has developed.

“I was impressed by the players’ dedication to the sport, desire to be good citizens of rugby and their eagerness to get back on campus,” Farrell said. “After a year of working with administration and playing in an unofficial capacity, they were granted sport club status. The success the club has had is no surprise to me given how dedicated they are to excellence.”

However, the spring season represents a completely new beginning for the squad. Fall rugby is competed with 15 players on each side, while the spring season is played with seven. According to senior forward captain Drew Mele, sevens-style rugby requires players to be in peak shape and relies on individual performances more than the team-oriented 15s. Mele said he has high expectations for the squad’s returners during the spring season.

“The amount of guys that have remained on the team have become really a core group of guys,” he said. “We’ve had a lot of the same starters since [2016–17], and they’ve kept that strong dynamic. There’s a lot of individual leaders on the team and that makes my job really easy.”

Mele will be a key contributor for the Bombers this spring. At the end of the fall season, he was awarded the NSCRO Heart and Soul Award. This award is given to a player who has made selfless contributions to their club on and off the field. The squad will rely on his leadership during the intense spring competition.

Farrell also said one of the biggest challenges that the team will face during the spring season is not the competition on the field but the competition for resources and field space at the college. As a club sport, the team receives less support from the athletics department than varsity squads. They often struggle to reserve practice space thanks to the unpredictable weather conditions of early spring.

Senior Mark Hassett, president of the club, said the team has difficulty finding consistent times to practice, as the practice and competition schedules of the spring sports are constantly changing and it must adapt to work around them.

“It is much more difficult for us to have constant and reliable access the facilities on campus opposed to the varsity programs that are guaranteed much more favorable and reasonable hours for their training and games,” Hassett said. “With that said, it is not always that easy to schedule the large amount of opportunities that IC provides, and it is certainly a give and take every step of the way.”

Despite this, the team has high hopes for the upcoming season. Mele said the squad focuses on fundamentals in practice when they are unable to train outdoors, a strategy which gives them the advantage of a stronger foundation than their competition. They will travel to Lancaster, Pennsylvania, and Pittsburgh for national–qualifier tournaments, where they will compete against the top rugby clubs in the region and country.

Farrell said the team’s game plan for the season will center on playing dynamically and creating a positive, lighthearted experience for every athlete.

“We boast a style of play that complements our athletic, fit and focused players,” Farrell said. “It is tough to defend against and encourages players to be creative and bold. Our strategy is to have fun, work hard, laugh a lot, continue to learn and bring a lot of snacks with us to competitions. If the competition results don’t go our way, at least we’ll have snacks.”

The Bombers open their spring season at 6:40 p.m. March 23 in Higgins Stadium. The squad will host Cornell University, SUNY Fredonia, the University of Rochester and SUNY Oneonta in the home tournament.

Rugby welcomes newcomers with or without experience