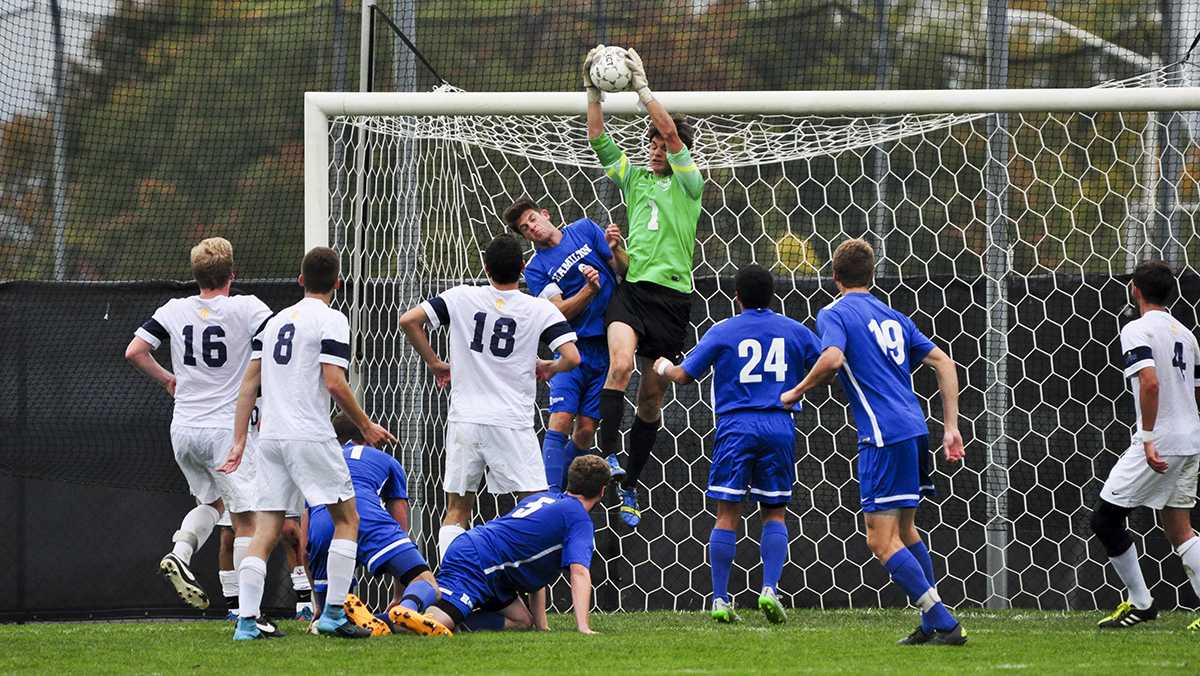 It has been a season of transition for the men’s soccer team. Longtime head coach Andy Byrne retired in February 2015, and his first full-time assistant, Patrick Ouckama ’05, was chosen as his successor. Ouckama inherited a large issue for any soccer coach across the globe: He was set to lose the team’s starting goalkeeper.

The graduation of Jordan Gentile ’15 left an opening at the back of Ouckama’s defense. He had a returning player in sophomore Dan Hinckley who saw fewer than 18 total minutes of play last season, as well as incoming freshman Brandon Enny competing for the starting spot.

In the end though, it was junior Zach Jacobsen, a transfer from Lincoln Memorial University in Tennessee, who won the job.

Ouckama said Jacobsen showed solid ability in the net during the preseason, and that he’s being pressured daily by his backups.

“Technically he’s very good and he communicates well,” Ouckama said. “That being said, there are two other goalies that are pushing him as well, and whoever the strongest goalie is will play at the end of the week. So far it’s been him, but he’s certainly being pushed day in and day out.”

Ouckama also said Jacobsen’s experience with the college game also played a role in his selection as the first–choice goalkeeper.

Jacobsen said he transferred from Lincoln not for athletics, but for academics, yet still had a desire to play soccer.

“As I began looking to transfer I still wanted to play, but there was no guarantee I would find a team,” he said. “I found Ithaca by chance [when I was] looking at environmental programs and saw it as a good fit.”

Jacobsen said after deciding to switch to South Hill, he looked at the team’s roster and saw an opportunity to join a squad in need of depth in the net. He thought he had a good shot as a rising junior with games under his belt at the college level.

As was the case with Jacobsen, Ouckama said he liked what he saw from Factor from day one of preseason and has included him as part of his starting defense ever since.

“He has a very high work ethic, he’s very attentive, he learns very well, he wants to do things the right way,” he said. “Whatever year the player is, if they go at it with that attitude, then they’re putting themselves in a position to see the game field.”

Along with a majority of freshman athletes, Factor said he has found the transition to be challenging, but his veteran teammates have made it easier.

“They’ve all been great. They’re all experienced defenders and are always giving me advice in practice and in games,” he said. “Our center backs are constantly communicating during the games, which definitely helps. The leadership of the returning defenders along with Coach O’s defensive knowledge has certainly helped Zach and I have a smooth transition.”

Speaking on his own transition, Jacobsen said he related to Factor.

“Coming to a new team, it made me feel like a freshman again,” he said. “I was a first–year and had something to prove.”

Despite a 4–7–2 record, the Bombers have an Empire 8 best 4–1 record in conference play. The squad has also only allowed three or more goals in just three games this season and has a goals against average of 1.32. Ouckama said this gives the improving defense reason for optimism.

“Having a couple games where we let in one goal or no goals at all, that’s kind of coming along as the season goes on,” Ouckama said.

Ouckama also said Jacobsen is playing with confidence and communicating well with the four defenders in front of him, allowing all five to read the play of the game more efficiently. As a result the defense as a whole can ensure they are in good position to stop an opposing attack.

Factor said he echoed his coach’s sentiments, but there is always room for improvement.

“I think that we have defended well as a back five and as a team for the most part. We just need to make sure we stay focused for the full 90 minutes,” he said. “Most of the goals scored against us have been [penalty kicks] or rebounds, which just comes down to staying concentrated and playing smart.”

Jacobsen said one weakness he has seen is injuries to members of the defense, but that as players return, the Bombers’ end of the field will tighten up.

“Going forward for the rest of the season I think we will only improve,” he said. “As players return from injury and each game becomes more important than the last, I feel we will get stronger as a unit.“