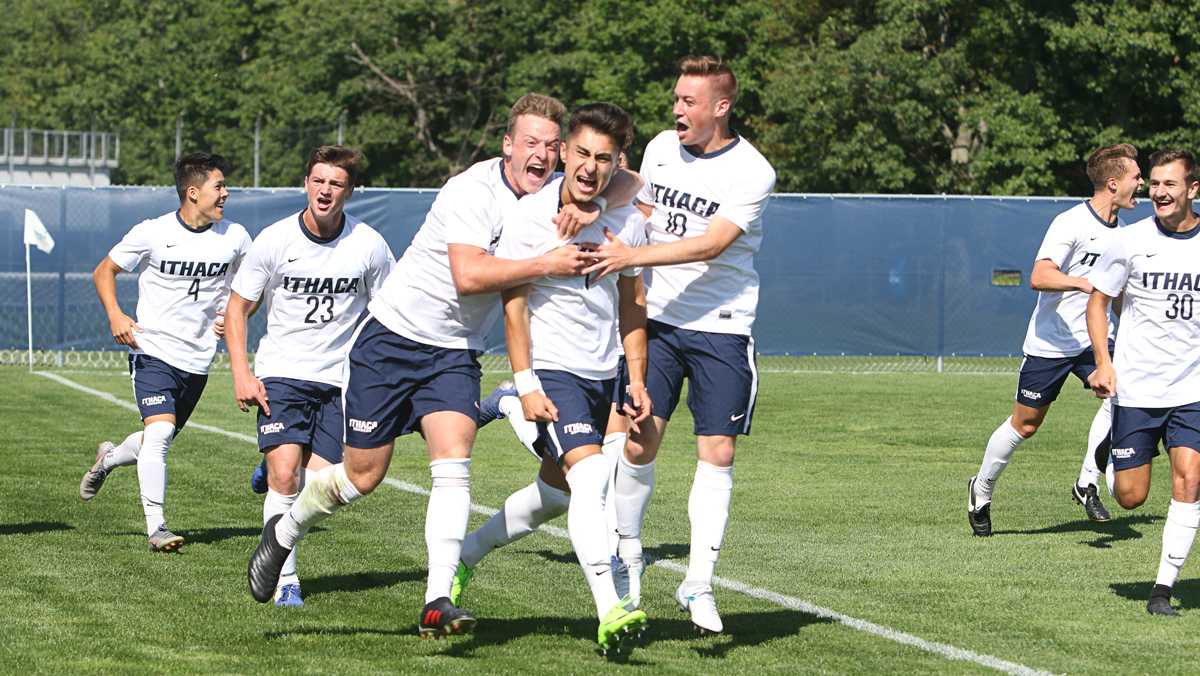 Abbey London/The Ithacan
Senior defender Justinian Michaels celebrates with his team after scoring the first goal of the game against New York University on Aug. 30. Michaels spoke at the ceremony before the game honoring Jase Barrack, a club soccer player who died suddenly in May.
By Emily Adams — Sports Editor
Published: September 1, 2019

The Ithaca College men’s soccer team won its home opener 4–0 against New York University on Aug. 30, but for the players and spectators, it was much more significant than a typical match. The Bombers dedicated the game to former student Jase Barrack, who died unexpectedly in May.

Barrack was an athletic training major at the college and a goalkeeper on the club soccer team. He died after falling from the steps of a house in Ithaca and hitting his head on the pavement. He was declared brain dead and removed from life support May 9.

Senior defender Justinian Michaels made a speech before the match remembering Barrack, who Michaels called his best friend. Michaels then presented a goalkeeper’s jersey with the last name Barrack on the back to the athletic training department. Michaels received the jersey from Patrick Ouckama, former men’s soccer head coach, who currently coaches the New England Revolution’s U-17 academy team. Michaels said that he met up with his former coach at a Revolution game in Foxborough, Massachusetts, and Ouckama brought him onto the field and gifted him the jersey to honor Barrack.

“I really wanted to have something physical that was there to leave our name and his name in the legacy here,” Michaels said. “I thought, what’s better than 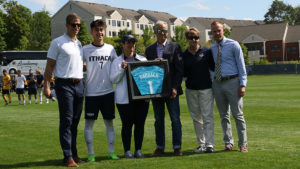 Michaels dedicated a goalkeeper’s jersey to the athletic training department in memory of Barrack.

donating something that I got this summer for myself to the athletic training program and have it hanging up in the clinic where he treated athletes for three years. That was one of the most special things that I could think of.”

Athletic director Susan Bassett said she was proud to see the team honor Barrack and to hear Michaels’ heartfelt words in memory of his friend.

“It couldn’t have been any more perfect,” Bassett said. “The day was beautiful, and [President Shirley M. Collado] could be here and myself. It’s just nice to be here to support Justinian and meet Jase’s family.”

The ceremony was a touching tribute, but the Bombers truly honored Barrack’s memory on the field. Just under five minutes into the game, senior defender Tom Dillman sent a free kick from the left sideline sailing into the box where Michaels was waiting to head it into the net.

The goal was only Michaels’ third at the college because he primarily plays defense. As he celebrated with his teammates, Michaels pointed to the sky in a clear nod to Barrack and the meaning behind the game.

“For him to do the pregame ceremony for his best friend and then score the first goal, it’s a Hollywood script,” head coach Kyle Dezotell said. “It almost brought tears to my eyes, and I think everyone here felt chills from that. None of us will ever forget it.”

Michaels said he could not imagine a better way to remember Barrack.

“Having all these guys standing behind me while I was talking and then getting to celebrate with all the team and the people who were out here today was incredible,” Michaels said. “All of that was for him up there.”

Sophomore midfielder Alex Leahy also had a stellar performance, shutting down the Violets on the defensive end and putting away the Bombers’ second goal of the day after beating NYU freshman goalkeeper Luca Mancuso in a 1-v-1. The South Hill squad’s other two goals came from sophomore midfielder Ali Kapasi and an own-goal by NYU junior goalkeeper Andrew Ashley after a scramble in the 6-yard box.

Barrack was also honored by fans on the sidelines who were wearing rubber bracelets created by junior softball player Erin Copozzi. Barrack was one of the athletic training students who worked with the softball team last season, so Copozzi said that she created the bracelets after Barrack’s death in the spring to sell at its postseason competitions.

“I hurt my knee in softball season, and we just clicked together,” Copozzi said. “We were like best friends. He was my trainer through all that, and we wanted to do something for his family.”

Copozzi said they have raised approximately $2,000 from selling the bracelets since Barrack’s death. She said all of the money will go to Barrack’s family as well as toward a plaque that will hang in the athletic training clinic alongside the jersey donated by Michaels.

“Jase was the most kind-hearted and down-to-earth person that I’ve ever been fortunate enough to be around every day here on South Hill,” Michaels said in his remarks before the game. “I miss him every single day that goes by.”