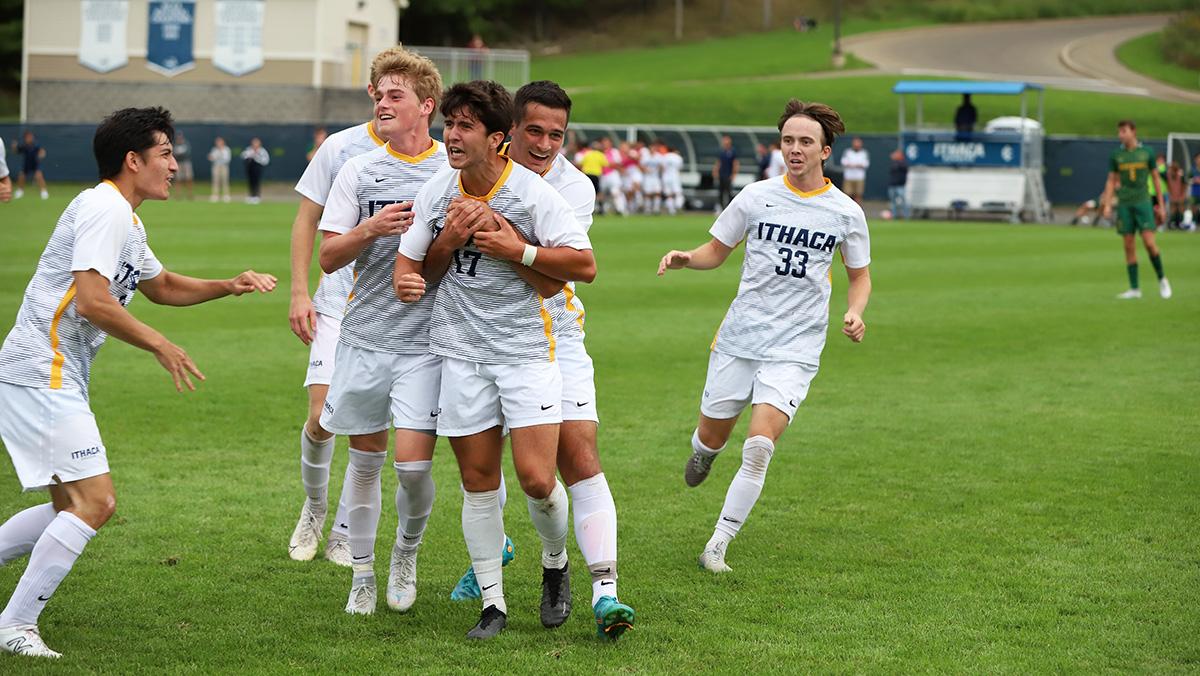 The Ithaca College men’s soccer team earned its first win of the season Sept. 16 with a 1–0 victory over the unbeaten SUNY Brockport Golden Eagles. The Bombers controlled the midfield but could not break through until senior defender Alex Cabeca’s breakthrough in the 70th minute.

The Bombers opened the game with energy, winning several fifty-fifty balls and playing in Brockport’s half. A few crosses came into the box, but nothing materialized.

The first good look at goal came from the Golden Eagles just after 10 minutes with graduate student forward Matthew Stefaniw missing a shot just over the crossbar from outside of the box.

In the 23rd minute, the Bombers saw a great opportunity from a corner. The ball trickled out the edge of the box and sophomore defender Jack Longo took a low shot that deflected off a defender and bounced wide of the goal.

The Golden Eagles opened the half with several good chances at goal. First-year student goalkeeper Rami Kayed made two important saves in 30 seconds to keep the game scoreless.

First-year student forward Andrew Kusek came up with the best chance in the game in the 59th minute. Senior defender Brendan Lebitsch played a great ball through to Kusek, who took a touch around his defender and put the shot just over the crossbar.

Cabeca found the breakthrough for the Bombers in the 70th minute. Junior midfielder Reefe Harrison dribbled past defenders in the midfield, then switched play to Cabeca streaking down the wing. Cabeca shook his defender, took a touch wide, then buried the shot in the far corner for a 1–0 lead.

Cabeca said the goal felt amazing after pressure and momentum kept building in the second half. His goal was just the second on the season for the team.

The team was animated to pick up the first win, and head coach Garret Eldridge said he felt his guys deserved the win.

“[It was] really a start-to-finish performance for the first time for us,” Eldridge said. “We’ve been very unlucky in the start of the season and it’s great to get the first win. The first one’s the hardest and it certainly felt that way, but we think we’re in for a great season and there’s still a lot of games to come.”