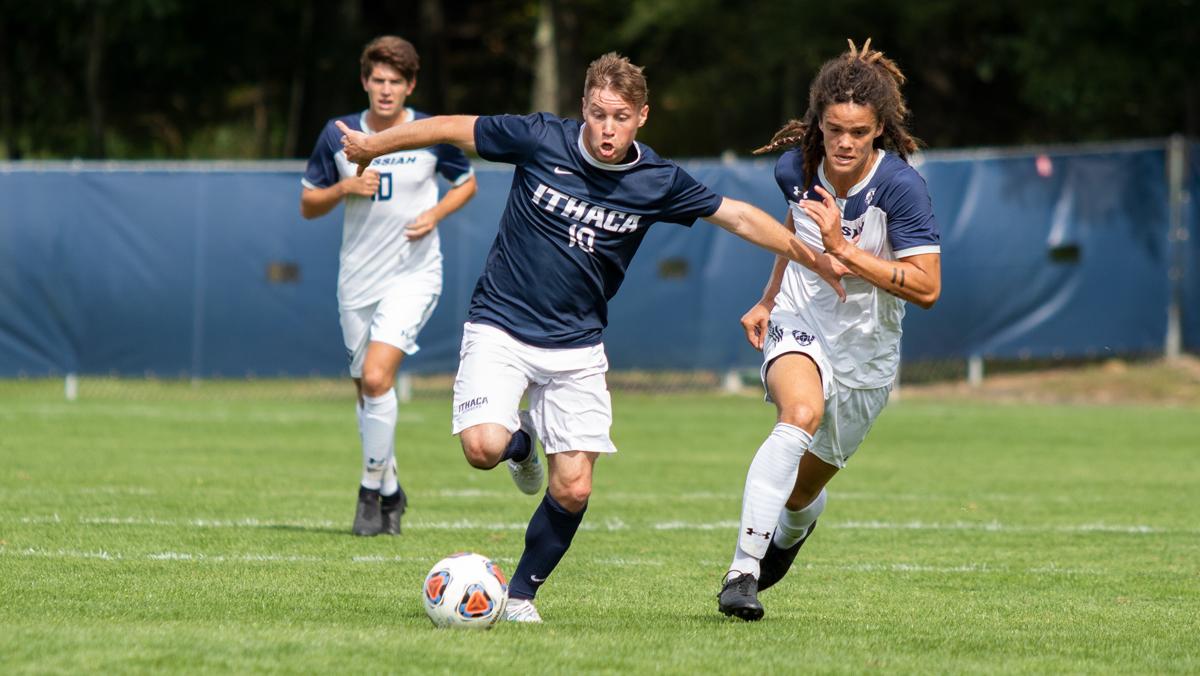 The Ithaca College men’s soccer team is off to a strong start after completing its double-header weekend with a 1–0 win over No. 5 Messiah College on Aug. 31 at Carp Wood Field.

Although the Bombers were outshot 11–8 by the Falcons, sophomore midfielder Alex Leahy was the lone scorer in the contest. Junior striker Jonathan Kyriakidis took a shot on goal that was saved by Messiah senior goalkeeper Nate Flanders, but the attempted clearance ricocheted back into the box, and Leahy was able to get a foot on the ball and put it away.

“I just saw a lot of pressure, and I tried to get in front of the ball,” Leahy said. “Luckily, it just took a good bounce. They’re a good team, and we were lucky enough to beat them on a goal like that, but we’ll take it.”

Both teams had plenty of scoring opportunities but were unable to finish in critical moments. The Bombers’ defenders struggled at first to adapt to Messiah’s precise footwork and passing as the South Hill squad tends to play a more fast-paced and aggressive style. However, the defense came into the second half looking more composed and was able to hold onto the lead.

Senior goalkeeper Max Lichtenstein earned his second shutout of the weekend and notched five saves on the day. Lichtenstein had an especially stellar second half, highlighted by back-to-back diving saves in the last three minutes of the game.

Head coach Kyle Dezotell said the victory was a complete team effort as the team fought against both its opponent and the fatigue of back-to-back games.

“All of our guys battled,” Dezotell said. “We went 21 deep, and it’s rare for a team to have that much depth, but it’s crucial. I don’t know that there’s any one guy. Everyone played really, really well today.”

This was an important win for the men’s soccer program. The Falcons have only missed one NCAA tournament in the last 20 years and made it to the sectional finals last season. The Bombers were passed over for an at-large tournament bid last season, so they added Messiah as well as New York University to strengthen their schedule and improve their chance to receive a bid.

Messiah is also currently the fifth-ranked team in the country on the United Soccer Coaches preseason poll, which was released Aug. 6. The South Hill squad did not receive any votes in the preseason poll.

“Our biggest takeaway is that we can compete at this level,” Dezotell said. “Now it’s a matter of making sure that this moment isn’t the best moment of our season. It’s just a matter of getting back to work to prepare for our game on Wednesday.”

The Bombers are back in action against Morrisville State College at 4 p.m. Sep. 4 in Morrisville, New York.