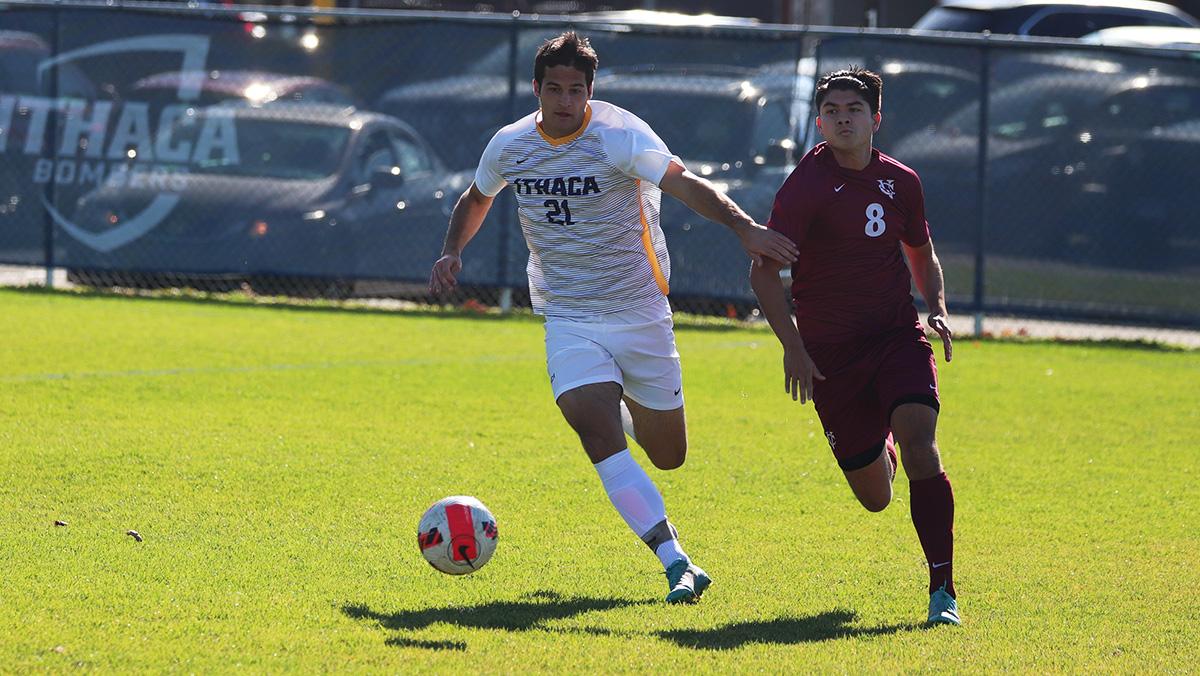 The Ithaca College men’s soccer team fought hard, but fell to the Vassar College Brewers in a 2–1 loss on its Senior Day game Oct. 29 at Carp Wood Field.

The Bombers started off the game well on both ends, keeping the ball on the Brewers side of the field the majority of the first half, and killing any attempts the Brewers had in their end.

The Bombers’ first scoring attempt came with in the fifth minute. Senior midfielder Jack McCarthy received a cross in the box, but couldn’t finish.

In the 12th minute, the Brewers began to attack, but junior Bomber defender Thaib Abidi stopped the attack with a tremendous slide tackle on Brewer sophomore defender Julian Funaro.

With both teams still knotted at 0, the Brewers were on the attack again, until the Bombers’ first-year student goalie goalkeeper Johannes Berghahn laid out to save a beautiful shot angled to the right of the net.

The first goal would come in the second half when graduate student midfielder Owen Johnstone floated the ball from the left side of the box to sophomore midfielder Connor Tierney, where Tierney finished the ball with a header in the 57th minute.

A minute later, Abidi would go up for the ball with Brewer senior midfielder Owen Fauth. This would result in a tough collision in the air and a yellow card for Abidi.

The Brewers would eventually respond when their senior defender Liam Kleitz delivered a corner kick to first-year student midfielder Jared Fiske in the 63rd minute, where he put the ball into the right corner of the net.

With multiple attempts to regain the lead, the Bombers failed to find the back of the net and allowed the Brewers to take the lead. Brewer senior defender Nolan Alexander crossed the ball into the box from the left side of the field to senior forward Owen Fauth, who headed the ball past Berghahn for the dagger.

A cross from Bomber junior defender Connor Baird to first-year student forward Jared Krasnove nearly tied the game for the Bombers with 10 minutes remaining, but the cross was an inch too high for the perfectly positioned Krasnove.

Despite multiple good looks at the goal, the Bombers were unable to even the game and lost the game 2–1.

Head coach Garret Eldridge said he believed that the team fought hard, but that the game went a lot like most games for the team this season.

“I thought the team performed really well,” Eldridge said. “I thought the game was very much like our season where we had all the play and a lot of chances, and we took one, and then we gave up two really bad goals and we were disappointed in that.”

Despite a rough season for the Bombers, Eldridge is looking forward to learning from the season and hopefully bringing out an impressive team next year.

“We’ll learn from it and get better in the offseason,” Eldridge said. “A lot of things were really good and we’re just missing a piece here and there. Just proud of the guys and the way they fought, I thought they were very resilient.”

Even after the loss, Eldridge still held his seniors to the highest regard.

“Owen Johnstone had a great assist, and he hasn’t gotten a chance to play that many minutes, but I thought he was fantastic,” Eldridge said. “I’m super proud of those guys. They’ve had a tremendous 4 years, so we’re really proud of them.”

The Bombers will look forward to next season finishing 3-9-5 on the season and 2-4-3 in Liberty League play.