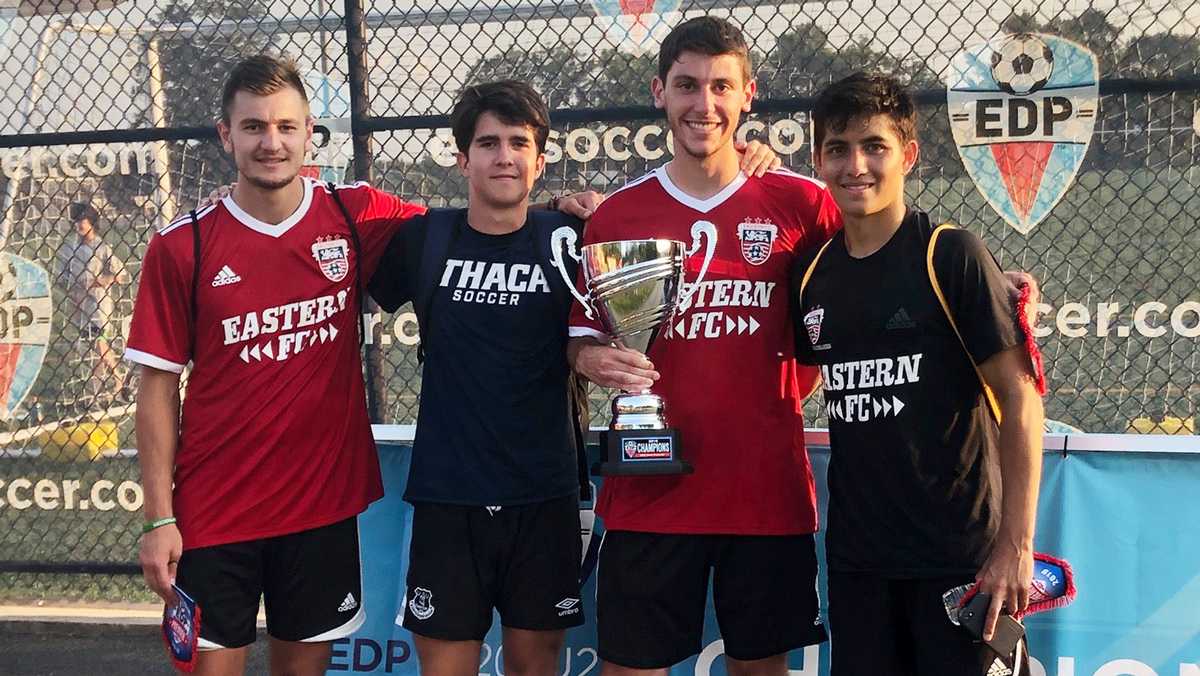 Four members of the Ithaca College men’s soccer team already had a championship win before they even set foot on campus for the year. The group competed together with Eastern FC’s U23 soccer team this summer and won the Eastern Development Program (EDP) championship.

Eastern FC is a soccer club based in eastern New York that fields teams from age 10 to 23. The U23 team competes only in the summer and is comprised mostly of college players looking to stay engaged in the sport during the offseason. This summer, the team played six regular season games from June to July and then competed in the EDP playoffs to bring home the title.

Junior striker Jonathan Kyriakidis, junior defender Luke Bugoni, sophomore midfielder Alex Leahy and freshman midfielder Alex Cabeca hoisted the EDP trophy together. Kyriakidis and Leahy both grew up playing for Eastern’s high school club teams, and Cabeca attended high school with Leahy, so the group reconnected on the field over the summer. Cabeca said he chose to play for Eastern partly because he knew it would give him the opportunity to play with his fellow Bombers before the season began.

“It’s always good for a young player like myself to go into the season already feeling comfortable with some of the guys,” Cabeca said. “Socially, you know people already, so it’s easier to talk to them and they know how you play. You have a starting point.”

“We want our guys to be sharp, so the more games they can play in the summer is really important to us,” Dezotell said. “You can see some guys will come in fit but not necessarily having played a lot or at the best level in the summer, and it can take them a month to get ready.”

Dezotell said he was excited to see his players win the EDP championship because it indicated to him that they were competing at the best possible level. Cabeca competed against athletes who were mostly upperclassmen in college at the tryouts for Eastern FC, and he was one of only two rising freshmen on the squad. He said that competing at the U23 helped prepare him for the demands of college soccer.

“You’re playing against a lot bigger and stronger players,” Cabeca said. “College soccer is totally another game than just summer league, but I think it was a good starting point to get a little bit of that feel.”

Kyriakidis started playing with Eastern FC when he was 13, and he began working with the more elite U23 team during his junior year of high school. He said that playing with his teammates over the summer has helped him develop stronger connections with them both on and off the field.

“You get to know what guys like, what they don’t like, what they feed off of,” Kyriakidis said. “The more you play with somebody is beneficial, not only for your personal relationship but for the team as well.”

Dezotell said that building relationships among players is critical for on-field success. He said that because the top teams in the country all have talented rosters, having strong personal connections can often set a squad apart.

The college’s soccer team works on developing these bonds in-season with activities like a cookout that Dezotell hosted at his house during preseason, but he said that continuing to strengthen them over the summer can only benefit the team.

Dezotell said he expects all four members of the Eastern FC team to be contributors during the upcoming season. Kyriakidis received United Soccer Coaches All-East Region Third Team honors last year, and Leahy saw the field in all 20 games as a freshman.

“They’ll all have different roles, but the expectations are there for this team now,” Dezotell said. “The talent has massively increased in the last couple years. Whatever their role may be, whether it’s to be a first–team all-conference player or to be the best practice player on the team, we expect them all to have a significant impact.”

Blue and Gold gear up for summer collegiate baseball leagues