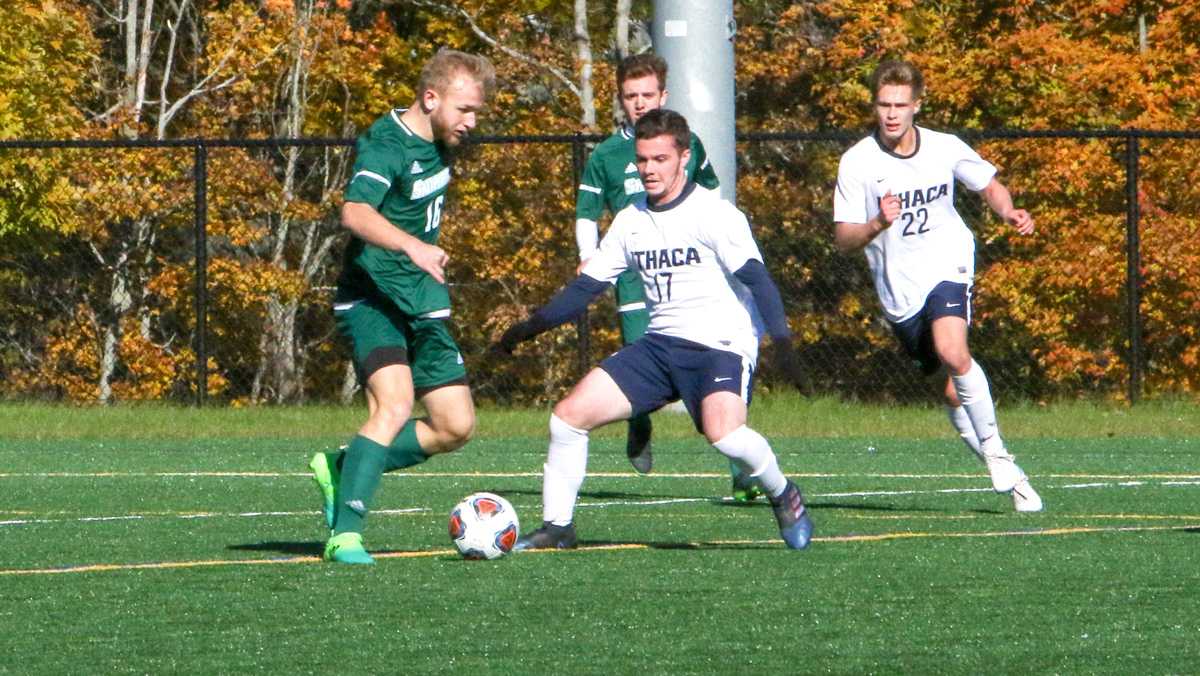 The Ithaca College men’s soccer team defeated the Skidmore College Thoroughbreds 1–0 in the quarterfinal round of the Liberty League Conference tournament Oct. 30.

The score was knotted at zero for the entire first half thanks to stellar defensive efforts from both clubs. Five Blue and Gold shots were blocked by Skidmore defenders, and a sliding save outside the box by Bombers junior goalkeeper Max Lichtenstein in the 66th minute halted a breakaway effort from the Skidmore attackers.

It seemed as if the trend would continue as the clock reached the final 10 minutes in the second half, but, with 9:14 left on the clock, junior striker Kevin Turi on the left side found freshman defender Thomas Pierce on the run for a left footed rocket into the bottom right corner of the goal

It was a tightly contested matchup between the Bombers and Thoroughbreds, featuring plenty of physicality and opportunities on both offensive ends. There were 20 total shots, eight corner kicks and 21 fouls, along with three yellow cards between both teams.

“We don’t mind grinding it out — we can go for 90 to 100, even 110 minutes if we have to. … We’ve won a number of 1–0 games this year and we’ve been good at keeping clean sheets so far this season,” Head Coach Kyle Dezotell said. “We felt like if we could get home field for this game we would have a pretty good chance.”

It was Pierce’s first goal of the season, and he is now one of 13 players who have scored this season for the Blue and Gold.

“Turi and I kept thinking that the ball would eventually come our way, and when I saw Kev get it I just made the move to space around him,” Pierce said. “[Turi] is a really smart player and played the ball over to me, and from there I knew the shot was on. I just put my head down, hit it, and hoped for the best.”

The Bombers notched their 13th win of the season, finishing the regular season with a record of 13–2–3, and 5–2–2 in the conference, earning the No. 3 seed in the Liberty League.

“It feels incredible, but it’s all about the team,” Pierce said. “We’re going to the semifinals. We’ve been working for this all year and we think we deserve it. We couldn’t be happier.”

The South Hill squad will face No. 2 ranked Rensselaer Polytechnic Institute in the Liberty League semifinal round at 1:30 p.m. Nov. 3 in Potsdam, New York.