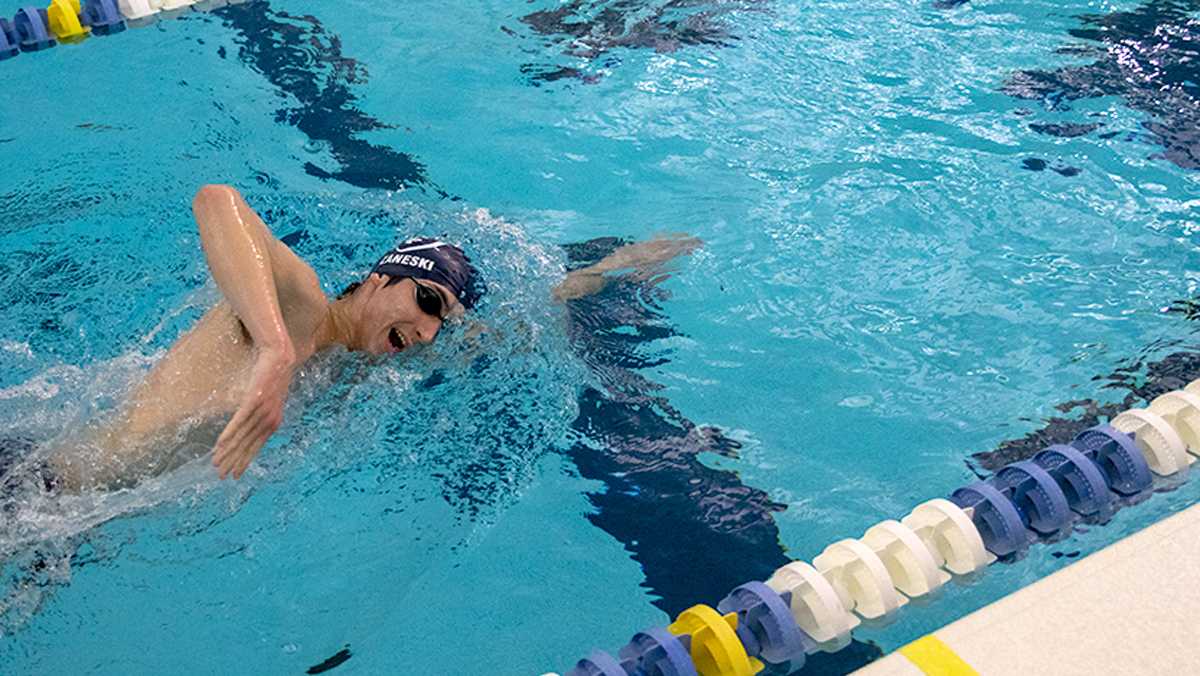 The Ithaca College men’s swimming and diving team is entering its 2018–19 campaign with a young and replenished squad.

In 2017–18, which was their inaugural season in the Liberty League Conference, the Blue and Gold went 10–3. They finished strong, winning their final five matchups en route to a third–place finish in the conference championships. The Blue and Gold started the 2018–19 season Oct. 20 with three wins against SUNY Fredonia, The College at Brockport and Buffalo State.

Senior Kellen Scanlan, who is entering his second season as a captain of the team, has high hopes for how the team will fare in the pool.

“I want us to win the Liberty League,” he said. “I think it’s going to be a battle, but if we train hard enough, I believe we have a good shot.”

Last season, the Bombers rolled out an unusually small roster with just 19 swimmers. This year, they have a much more stable 29, thanks, in large part, to their 12 freshmen. Scanlan believes they have had a big impact on the team thus far.

“The young guys really fill out our depth and actually contribute to our top talent as well,” Scanlan said. “I’m just excited to see where we go by the end. I think we can make huge strides this year and set something up for a good couple of years for those young guys.”

In the first meet of the year, the excitement surrounding the freshman class came to fruition as several freshmen took the top spots in their respective events. Freshman Spencer Brownewell won the first two races of his collegiate career in the 50 and 100-yard backstrokes, freshman Michael Sheehan claimed victory in the 500-yard freestyle and freshman Tim Hector touched the wall first in the 100-yard medley.

Head swimming coach Kevin Markwardt said the biggest adjustment that the coaches must make every year is to figure out where the freshmen should fit in.

“It is really a matter of figuring out the freshmen,” Markwardt said. “We know what they have swum in the past, but we need them to sometimes change their events. Over the first couple of meets, we are just moving people around to figure those guys out. When you figure those guys out, the workouts are able to be set better.”

Sophomore freestyler Stan Zaneski is eager to see the differences the enlarged roster will make on the team’s morale.

“Last year, we had a considerably small team size,” Zaneski said. “It’s going to be really interesting to see how we’re going to do and how the cultural climate is going to grow.”

The team has started out the year with the same opening schedule as last fall. They defeated Fredonia, Brockport and Buffalo in the first meet and fell to Rensselaer Polytechnic Institute in the second meet. Markwardt believes the team needs to work on finishing strong to ensure success for the rest of the season.

“RPI beat us in a lot of close races,” Markwardt said. “Some of that is because they were bigger and faster and stronger, but I think they wanted it a little more than we did. While changing a couple of the results wouldn’t have helped too much at that meet, it will at others. We have to be tougher with our races.”

Markwardt said the top teams should be similar this season, but the Rochester Institute of Technology, Vassar College and Clarkson University all look to improve.

“The dynamic has changed a little bit over the years,” Markwardt said. “We are lucky to be consistently pretty competitive, but RPI has been on the rise for the past four to five years; they are doing really well. RIT is looking better: They beat us last year, and they are much better than they were last year. Vassar apparently brought in a strong freshman class, and Clarkson have a new coach, so things may be popping up there.”

The South Hill squad will look to avenge last year’s loss to RPI Jan. 19 in Troy, New York, at the Henry Kumpf Invitational. Another meet to look forward to will be the weekend of Nov. 30 for the Bomber Invitational. Markwardt said the team looks more for individual and team improvement rather than where it ends up in the standings.

“Swimming is a sport that really looks to the end of the season to have their best times,” Markwardt said. “Our idea is about how each individual has to figure out how they can swim the best they can swim and what is it going to take for them to be the best.”