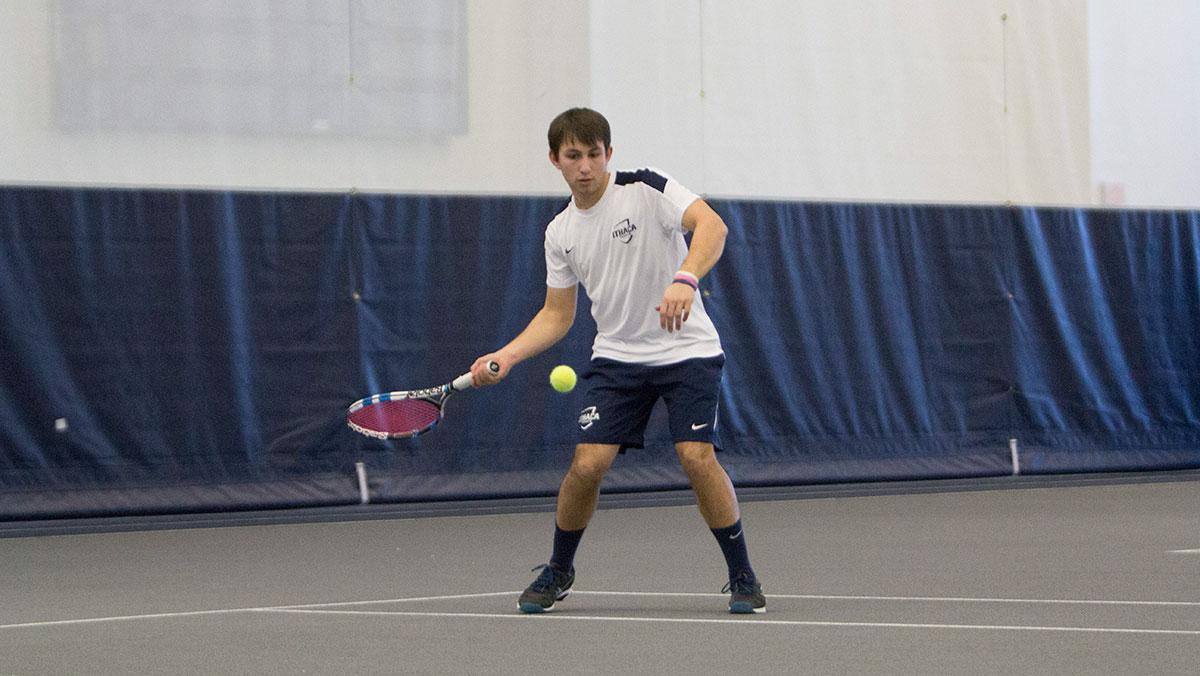 CAITIE IHRIG
Senior Chris Hayes plays in one of his tennis matches last season in Glazer Arena. This year, he is the only senior on the men's tennis team.
By Caitie Ihrig — Staff Writer
Published: March 2, 2016

After finishing last season with a 10–8–1 record and falling to Stevens Institute of Technology in the Empire 8 Championship by a final score of 5–0, the men’s tennis team is coming into the season with new goals in mind.

Head coach Bill Austin said the main goal this year is to work harder during every practice and match in order to beat Stevens Institute of Technology for the first time since the 2009–10 season and win the Empire 8 Championship.

Senior Chris Hayes said this could be its year to win against Stevens, after beating the University of Rochester on Feb. 14, something it hasn’t been able to do since 2009.

Hayes said he is feeling optimistic about the season after the win against the Yellowjackets.

“We are working really hard, and really it all starts with belief,” he said. “Beating a team like Rochester, where we have had no success against for so many years, will install a lot of belief in some of the guys. I think we are going to have a really good year.”

In order to accomplish its goal, the team decided to focus on each match individually instead of focusing on the end-of-season championship meets.

The Bombers’ new assistant coach, Jordon Smith, said by taking the season one match at a time, the team will be able to greatly improve.

“We are really going at it that one game at a time, one point at a time,” Smith said. “Our goal is to maximize our potential and try to win the match that is in front of us, the immediate match.”

Smith joins the tennis team after coaching at Wheaton College in Norton, Massachusetts, for a year, where he helped the team win 14 matches. Before that, he worked for five years at the Ocean Edge Resort & Golf Club in Brewster, Massachusetts, as an assistant tennis professional.

One thing freshman Michael Gardiner said he likes about Smith is that he works with each player one-on-one.

“We probably couldn’t have beaten Rochester without him,” Gardiner said. “He works with us individually on anything we want. He just always knows what to say in the right moments.”

Smith said he believes by learning how everyone on the team plays, he and Austin can give them specific feedback on how to beat their opponent.

“We are giving each guy’s game an identity so they go into every match, regardless of who they play, with an idea of how they want to play,” Smith said. “Something that matches up their strengths with their opponents’ weaknesses.”

Even though the Bombers are only focusing on their next match, Gardiner said their match against Stevens on April 9 will always be in the back of their minds.

“With every match we play, we mentally put ourselves in the shoes as if we are playing Stevens so we never underestimate a team,” Gardiner said. “We always play our hardest because that is what we are going to have to do against Stevens.”

Throughout the season, the nine underclassmen will be looking up to the five upperclassmen. Smith said Gardiner and fellow freshman Stefan Lazarevic will be key this season and will push the upperclassmen to work harder.

“We have a lot of talent with the underclassmen, whether it’s Michael coming in and playing number-one singles, which is normally something that doesn’t happen, or Stefan coming in the doubles lineup, which is a huge gain,” Smith said. “They are pushing a lot of the upperclassmen, and their talent is on full display during every practice.”

Hayes is the team’s only senior and serves as captain. He said he would like to end his college career with 100 wins and beat the teams he has never won against before, including Stevens, Hobart College, Connecticut College and The College of New Jersey.

Even though the team has four more upperclassmen than last season, junior Wes Davis said how the team is still mainly composed of young players who want to earn one of the 12 spots in the starting lineup.

“The underclassmen have the raw passion and are really ready to go to prove themselves,” he said. “I think there is a good combination between focus and experience and passion and drive to show themselves.”