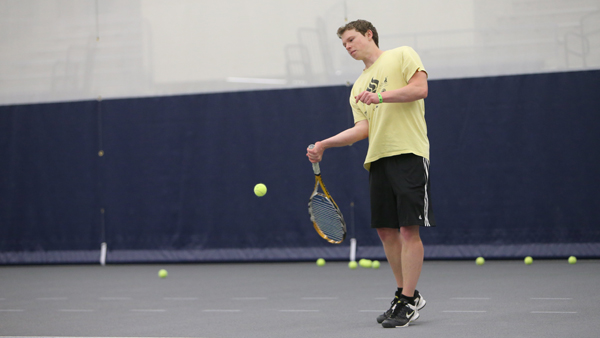 When teams receive season schedules, every squad circles one game on the calendar that means the most. When the Bombers’ men’s tennis team received its schedule of play before the year began, several members of the squad walked over to the calendar and drew a thick, black circle around April 14, a day featuring a matchup against the Stevens Institute of Technology Ducks.

For the past few years the team has had trouble with its biggest rival. While results have been disappointing against SIT, the team looks to learn from the losses and use them as fuel for an Empire 8 Championship. So far this season, the team has posted a 2–11 season overall.

On Sunday, the two Empire 8 rivals squared off for the first time this season in Hoboken, N.J. The results were lopsided, as the Ducks shut out the Bombers 9-0. Head Coach Bill Austin looks at the match as a wake-up call against a good team.

These two foes have been battling big matches the past couple of years. These are the two teams that have been the last two standing in the conference tournament the past three years, the Ducks getting the best of the Bombers in all three.

Junior Griffin Reid has been a part of the past two losses, and he said it is hard to forget, but it also serves as motivation to go out and get them this year.

“I think losing to a team that we all felt we could beat three years in a row hurts,” he said. “It makes you even more determined to go out there and work hard at every practice and match with the ultimate goal of beating the team that we have finished second to for the past three years.”

Sophomore Justin Levine said the Bombers want to take home the Empire 8 Championship, and losing in the finals makes them want it even more.

“Losing in the finals definitely motivates our team,” he said. “The goal year in and year out is to win an Empire 8 title.”

In the past three seasons, the Ducks have won six of seven matches against the Bombers, including the three titles. The last win for the Bombers against SIT was on April 10, 2010.

Last year, the rivalry solidified during the Empire 8 Championship. The Blue and Gold hadn’t lost a single doubles match the whole season, but the Ducks swept doubles to start off competition. The Bombers couldn’t quite make it back, losing the first of three straight title games to their now rival.

“I think the rivalry amped up that year on both sides,” said Austin. “They played tremendously, and we played well, they just brought a little more than their A-game that day.”

When it comes time for these two teams to play, Austin said he sees a little more excitement from his team during the week of practice and in the match that is different than preparing for other teams.

The Bombers lost their only regular-season chance to beat their rival on April 14, but they could have a shot at redemption if they match up against SIT in the Empire 8 Championship. Reid said the South Hill squad is motivated when it comes time to take on the Ducks.

“On the court, they are the ones that have something to lose, so we know we just have to go out there and give it our all and see if we can take them down,” he said. “It makes us even hungrier to get that victory.”