Men’s tennis team looking for a bounce back season 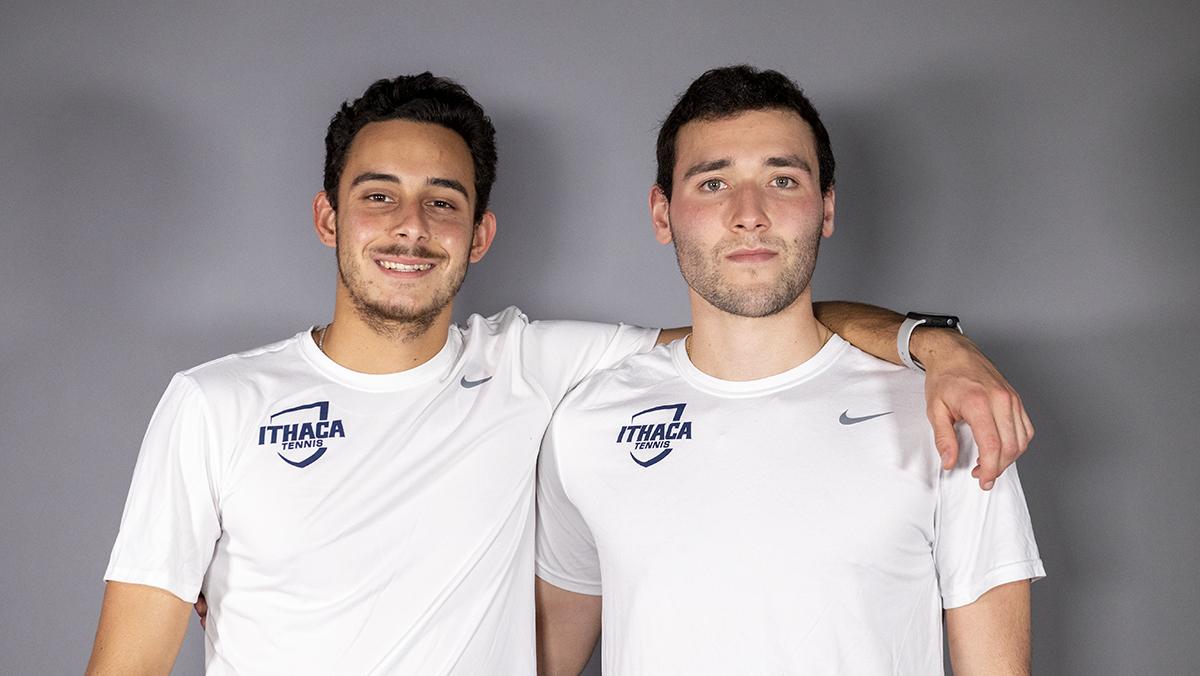 Ana Maniaci McGough/The Ithacan
From left, senior Artem Khaybullin and sophomore Jacob Wachs of the Ithaca College men's tennis team. The Bombers will be looking to improve their 4–4 record during a COVID-shortened season in 2021.
By Tobiah Zboray — Staff Writer
Published: March 3, 2022

After a shortened eight-game schedule in Spring 2021, the Ithaca College men’s tennis team is looking to improve its record in its first full season of play since Spring 2019.

The team, which began its spring season Feb. 19 with a 9–0 victory over Wilkes University, is hoping to build upon its 2021 season when the team went 4–4 during a conference-only schedule due to the COVID-19 pandemic. For head coach Chris Hayes, who was hired in May 2020, the shortened season last year made his transition into his role more difficult.

“Last season was definitely something,” Hayes said. “We were very limited, not just in terms of practices and all of that, but the amount of matches we played. We only played eight or nine matches in the spring, which is obviously a lot different than what we have this semester. We’ve got 16 matches this spring, so I really feel like this is my first full year as head coach.”

To help ease the Bombers back into competition this season, Hayes is looking for the more experienced members of the team to be role models for a roster that has mostly underclassmen. Of the 10 players, six are freshmen or sophomores.

“[Senior] Artem [Khaybullin] and [second-year graduate student] Minos [Stavrakas] are the captains of this team,” Hayes said. “They’ve been around the block for a while now, so they’re leading by example. We do have a fairly young team … so really setting the example is vital.”

Khaybullin has been a consistent member of the team since his freshman season in 2018, winning eight singles matches and four doubles matches during his time at the college. For him, the goal for this year is to enjoy his final season with the team while also serving as a leader.

“Since I’m a senior, this is going to be my last season,” Khaybullin said. “So for this season, I mainly want to perform the best I possibly can … So I’m just going to try my best, go to all the practices and meets, do team bonding activities with my teammates, spend time with them and just have fun.”

Adding to the experienced depth of Khaybullin and Stavrakas, Hayes said the sophomore class of players is looking to take a big step forward this season on the court. Sophomore Jacob Wachs said he used the off-season to work on fine-tuning his skills to try to make an impact on the team.

“I worked on staying a lot more consistent, getting the heavy ball deep, keeping my opponents on their back foot and behind the baseline,” Wachs said. “And then, off the court, just being a role model for like the younger guys and energizing everybody and keeping everybody motivated.”

On top of getting a strong performance from the sophomore players, Hayes said the Bombers are expecting the two freshmen on the team to start making an impact and are looking for them to be key members of the team in the future.

“Tyler Del Zoppo is a bright talent,” Hayes said. “He’s a hard worker and I’m really excited to see how much he improves down the road. The other freshman, Daniel Borenius, he’s worked really hard over the off-season, and that’s showing right now. He may not be a starter on day one, but he’s the kind of player that can just develop.”

Hayes added that another part of the Bombers’ strategy to improve this off-season was to use the assistance of two sport psychology graduate students. He said they have been working with the team to improve their mental game for the upcoming season by giving them strategies to remain composed on the court.

“Tennis is such a mental sport,” Hayes said. “They say about 90% of tennis is the mental game, and the other 10% is the physical game, so it was a no-brainer. Having an opportunity to work with sports psychology students that are getting their master’s here, it made a lot of sense.”

Khaybullin said the hope for the team is to make a run at the Liberty League playoffs and to play well against conference opponents while also enjoying the team’s spring break trip.

“We’re trying to really push ourselves [this season],” Khaybullin said. “There’s some really hard teams that we’re going to be competing against like Skidmore [College] and [Rensselaer Polytechnic Institute (RPI)], but we are going to be trying our best.”

But for the team to break into the top of the conference, it will have to contend with a talented slate of conference opponents. Skidmore, the reigning conference champions, have won the league 12 times since the 2004–05 season, including six out of the last seven.

“Skidmore, RPI and Hobart [College] are the three best teams in our conference this year,” Hayes said. “Hobart is good. Skidmore and RPI have been the class of the conference for the last few years.”

Even with the tough competition the team will face this season, Wachs said the team is looking forward to its first full spring season in three years, along with less COVID-19 restrictions making it possible for people to watch games in-person this season.

“I know one thing we’re all looking forward to is having spectators,” Wachs said. “Our family and friends are able to come to our matches this year, which wasn’t really what happened last year, and we’re also excited to actually finally be able to play the entire Liberty League.”

Men’s tennis team serving up new style on the court