Men’s tennis team serving up new style on the court 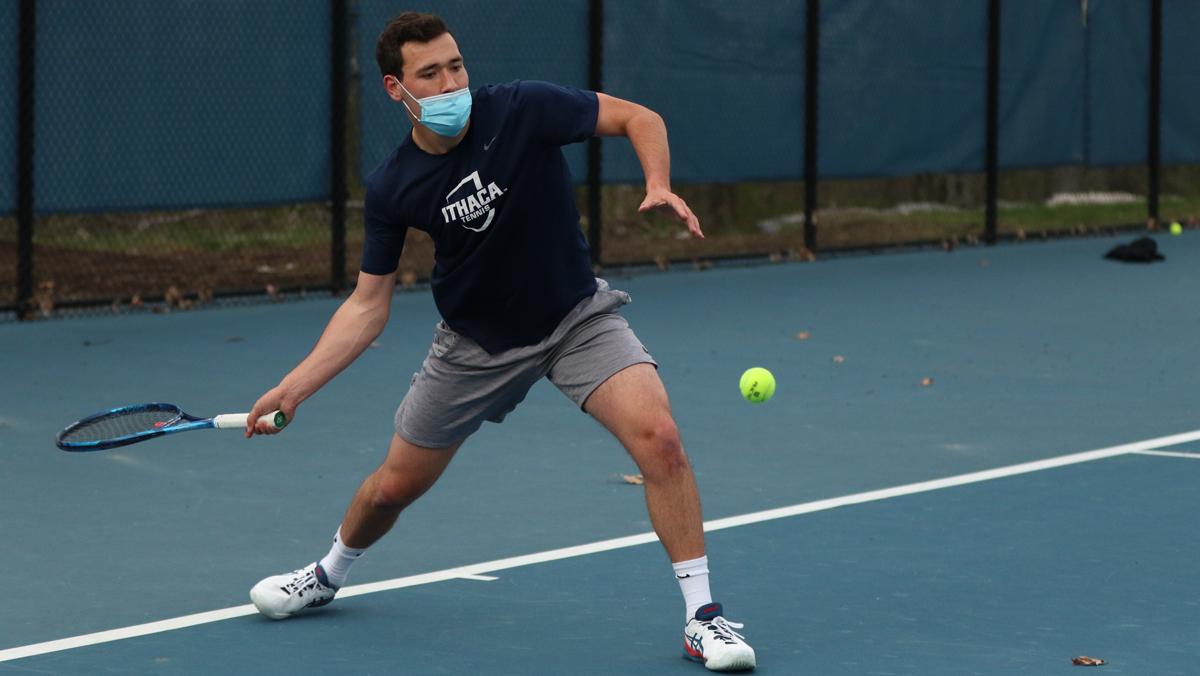 Historically, the Ithaca College men’s tennis team has relied on outlasting their opponents in rally situations to win matches. This season, the Bombers have pumped up the power.

With an influx of freshmen with stellar serving abilities, and continued development of key members of the team, the men’s tennis team has been able to start strong in 2021. The team is currently 3–2, with both losses coming from Vassar College, who is currently undefeated and got off to a 7–2 start in the pandemic-shortened 2019–20 season. Much of the Bombers’ success can be attributed to a shift in game style by the team, with a focus on highlighting the team’s newfound strength in high-velocity serves.

Head coach Chris Hayes said a tennis team’s style is reliant upon the players who are in the lineup as opposed to a traditional system that has existed for years, so the new freshmen joining the lineup changed the team’s dynamic.

“Every guy on the team has a specific kind of game style,” Hayes said. “We had a group of recruits that have a style, and then the team molded around it.”

This season’s freshmen are Anthony Villella, Deon Kraft, Eric Dubilirer, Nicolas Luis and Jacob Wachs. All five have played in at least three matches this season and have a combined record of 16–14. Hayes said the group has extensive experience in doubles play before arriving at South Hill, which is uncommon for underclassmen at the college level due to a youth focus on singles development. He added that this made the newcomers easy to fit into the lineup.

“All of the freshmen can play doubles,” Hayes said. “Eric, Deon, Jacob and Anthony all specialize in doubles, while Nico is developing after not playing as much doubles in high school and junior play. Serving definitely has something to do with their success, but their ability to volley is also impressive.”

Wachs said the transition from high school play to college has been easy for him as he was the only person on his high school team that played year-round and competed in United States Tennis Association tournaments. He said the upperclassmen and captains have made South Hill feel more like home for himself and the other freshmen.

“Being part of a dedicated college atmosphere is very encouraging,” Wachs said. “Our captains and upperclassmen have done an incredible job of welcoming us five freshmen into the IC tennis family and helping us mentally and physically prepare for college tennis. Our captains have created an ideal atmosphere where each teammate has everyone’s back, no matter what.”

In addition to the newcomers, the team’s veterans have been serving strong as well. This has led to more aces — points being earned off the opponents not being able to return the initial serve. Hayes said this has been crucial in the early success the team has had.

“We are getting more free points off our serves,” Hayes said. “We have a lot of guys with great serves. [First-year graduate student] Minos [Stavrakas] has always had a good serve, [junior] Artem [Khaybullin] has really made an improvement with getting his first serve in and getting free points, and all five of the freshmen came in with really strong serves and are able to win free points or set up the opportunity to get the point.”

Khaybullin said he worked on his serve during quarantine and has felt a difference in his play.

“Getting the first serve in is important in tennis because you only get two tries to serve, and if you miss them, you lose the point,” Khaybullin said. “Getting in the first serve builds upon your confidence for the remainder of the point, and aces give you a free point with doing minimal work. Being able to do this consistently is a big part of the success of professional players and, in this particular case, college players.”

With this increase in accuracy, Khaybullin has been able to utilize more strategy when serving as opposed to just focusing on keeping the ball within the confines of the service box.

“On the first serve, I try to go for power over placement,” Khaybullin said. “I usually aim for fast body shots that are hard for the opponent to turn sideways and return it. For the second serve, I hit it a bit softer and try to aim toward the edge of the box.”

For Villella, serving has always been his strong suit. Villella said he was bigger than most at a young age, so he developed the power behind his serve early on in his playing career. He is still improving his serve, but he is able to use it to force his opponents into making bad return shots mistakes.

“My approach is pretty much the same from match to match,” Villella said. “I’m just trying to be a more consistent server and get the first serve to set up second balls.”

Hayes said Villella’s serving ability somewhat contrasts with his hard-hitting teammates, but is still extremely effective, especially when partnered with someone with a flat serve.

“Anthony’s serve has definitely improved as we have gotten more practice,” Hayes said. “He has more of a spin serve, which is really effective with doubles.”

Hayes said Wachs has grown since arriving at South Hill.

“Jacob’s serve has improved a ton,” Hayes said. “We are working on his flat serve because he hits a good spin serve but is starting to notice he can hit the flat serve. It’s all about building confidence.”

As Villella gains more experience playing in doubles and perfecting his serve, he said it will add an extra element to his game.

“We’re not really looking to win points off the serve, it’s more to set up points off of them,” Villella said. “We’ll still go for [aces], just not consistently. But we’ll definitely keep that in our back pockets.”