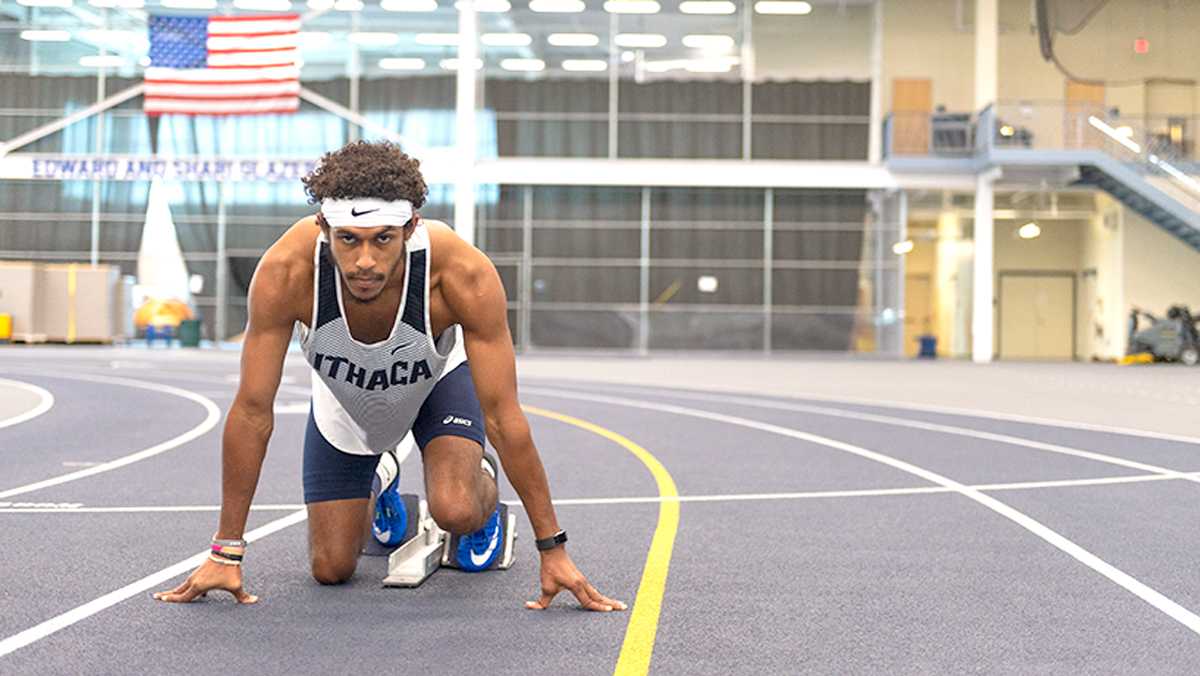 After securing its spot as the top team in the Liberty League Conference last year, the Ithaca College men’s indoor track and field team is looking to build off its past success.

In their first season in the league last year, the Blue and Gold won the Indoor Track Liberty League Championship and placed fourth at the All-Atlantic Region Track and Field Conference Indoor Championships.

Head coach Jim Nichols said each year is different, but by focusing on placing highly in all events this season, the team’s goals and expectations remain the same.

“We have good depth,” Nichols said. “The strength we’ve always had is the balance. There are 20 events, and we score in all 20 of them.”

Senior pole vaulter Martin Desmery said he has high expectations for himself and the team this year. As a junior, Desmery placed fourth at the Liberty League Championships in the pole vault. He also set the school record for pole vault with a height of 4.71 meters at the All-Atlantic Championships on March 2.

“For preseason this year, we have been going a lot harder than we have in years past,” Desmery said. “We’re doing things more consistently, and everything is a lot more planned than in previous years. We’re trying to make the team more of a team and not just kids who are coming together in the last minute.”

Junior sprinter Daniel Harden-Marshall said he also has noticed a difference in focus and preparation thus far into preseason. As a sophomore, Harden-Marshall dominated the field, setting school records for the 200-meter dash, the 400-meter dash and the 4×400-meter relay. He then won the 2017–18 Liberty League Indoor Track Performer of the Year award for his performances.

“Our seniors have done a really good job getting us hyped up and excited to race,” Harden-Marshall said. “They’ve done a great job at keeping the energy up in that aspect.”

Nichols said that although the team lost some successful seniors last year, it still has big expectations.

“We graduated some good guys last year, but we also have some young guys coming in too,” Nichols said. “Every year is different, but that’s the beauty of sports. It’s a blend of youth and age when we graduate seniors and have young guys come into the program.”

After winning last year’s league championship, the Bombers have a chance to do so again as they host the Indoor Liberty League Championships on Feb. 22 and 23. The Blue and Gold also host the All-Atlantic Region Conference Championships again March 1–2 this year in the Athletics and Events Center.

“First and foremost, we won the Liberty League Championship last year, and we get a chance to defend it at the A&E Center, which is great,” Harden-Marshall said. “We should also have some guys who are breaking school records this year.”

Desmery said he hopes the team maintains consistency in its hard work this season instead of letting up at any point.

“Last year, we had a pretty good indoor season, and I’d like to do that again, but I’d like to take the energy we had in indoor and push it into outdoor season as well,” Desmery said. “We kind of slowed down in the spring because it’s a shorter season.”

The South Hill squad also has its goals set on qualifying for the NCAA Division III Indoor Track Championships this year. Harden-Marshall was the only athlete on the team who qualified last year, and he placed 11th overall in the 200-meter dash and 14th in the 400-meter dash.

“We look to qualify as many people as we can this year to nationals and compete at the All–Atlantic, which we’re hosting,” Nichols said.

The 4×400-meter relay looks to defend its Liberty League Championship title after winning last year’s race with a time of 3:23. The relay team returns three of the four members from last year, including anchor Harden-Marshall, junior Logan Winningham and senior Derek Howes.

“I’m definitely pushing for our 4×400 team to go to nationals,” Harden-Marshall said. “We were outside of qualifying by five teams last year. Overall, I think, this year, a lot of the guys on the team will be coming out of their shell a bit and showing us what they really have and what they have left.”