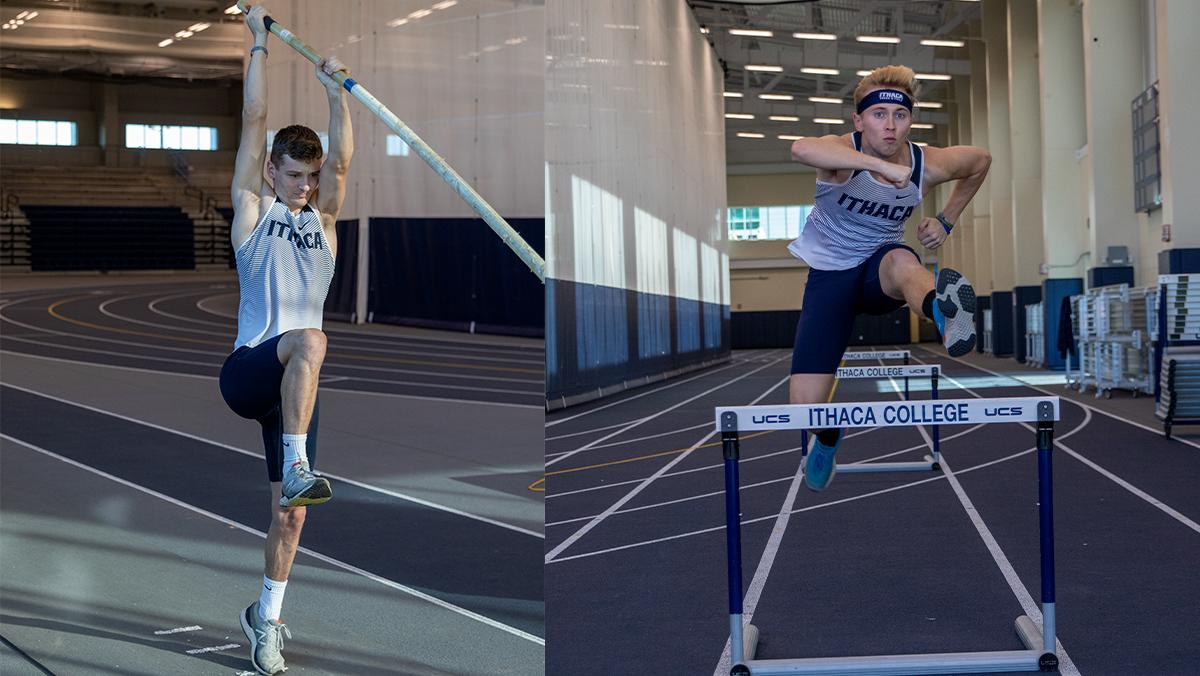 Eleanor Kay/The Ithacan
From left, senior Dom Mikula and junior Nate Oczkowski will look to be key contributors as the Bombers set out to claim a title.
By Ori Grady — Contributing writer
Published: November 10, 2021

The Ithaca College men’s track and field team is gearing up for its upcoming indoor season. The squad has begun preparing to compete in its first full campaign since 2019 and has high expectations heading into the new year.

Due to the 2021 season being shortened by the COVID-19 pandemic, only outdoor competitions were held and indoor conference and regional play were canceled. These circumstances have led to this upcoming season being the first full year for all underclassmen.

Head coach Jim Nichols is entering his 35th season at the helm of the program. Nichols has coached 53 All-America finishers, posted a combined 33 Liberty League Championships between outdoor and indoor track and field and four state titles also between the two. This season, Nichols will look to add to his already illustrious resume.

After earning the Liberty League Coach of the Year Award for the outdoor 2021 season, Nichols said he is eager to see his athletes compete.

The outdoor track and field team is coming off a first place Liberty League conference finish, third place regional finish and a tie for 30th at the outdoor NCAA Championships in May. Senior pole vaulter Dom Mikula is eager to return to action and believes that he and the team are prepared for the upcoming season. Mikula said he has been training for this season since August.

“I feel in the best shape of my life coming into this season,” Mikula said.

Mikula, the 2021 All-American second-place pole vault finisher, holds the school record in both outdoor and indoor pole vaults at 5.11 and 5.0 meters. He’s also coming off a season in which he swept the competition by appearing on the first team conference and regional list.

Mikula said that while some may have their doubts about this team, he is confident in the abilities of his teammates. He said he believes that they have the potential to be a competitive group this winter.

“I think we’re a sneakily dangerous team,” Mikula said. “Not many teams are going to look at us and be like ‘this team is going to win.’”

Among the veterans coming back to the team, the Bombers will turn to Mikula and junior hurdler Nate Oczkowski to make an impact. Oczkowski, a 2021 NCAA qualifier in the 400–meter hurdles, believes the team has the leaders to make a deep run.

“I bring out the best of my teammates so just developing that bigger leadership role on the team is important,” Oczkowski said.

Oczkowski does the most to keep his body thriving, spending most of his time during the offseason focusing on all parts of his body, as well as keeping his legs in prime condition.

“I hit the gym, which was a big focus for me personally,” Oczkowski said. “Which [included] lifting weights, so I can get bigger, faster and stronger overall.”

Oczkowski said he knows that preparation is more than just physical, but also mental. He likes to work on how his mind can impact his running when he is resting.

“I made it to nationals last year, but that’s last season,” Oczkowski said.“Right now, I really want to focus on the present.”

Mikula, similarly to Oczkowski, keeps his mind just as locked–in as his body, as his mental focus plays a vital role in his success, which helps him be a leader for the team on and off the track. Mikula said he likes to create a quiet place for himself before matches.

“I like walking through … my pre-meet routine before the meet even starts,” Mikula said. “There’s a lot of visual repetition. Just visually going down and running down the runway.”

This combination of physical and mental balance largely contributes to the track and field team success, since it is acknowledged as an important role to winning. Nichols said he sees the effort his athletes make, which is why he doesn’t take his job for granted. He said he recognizes the support his athletes give him every day.

“It’s a privilege to coach,” Nichols said. “Our greatest asset is our student-athletes. The greatest thing that we have going through our program are the athletes.”

Nichols appreciates his athletes not only because of the success they have on the track, but because of the positive characteristics they represent on campus and in their lives. He said the team honors respect and what is needed to impact everyone else around them in the most positive way.

“Those are the types of athletes that are in the program,” Nichols said. “Guys that are continuing to do all the little things necessary to be successful not just as athletes, but as students as well as individuals on campus.”

The men’s track and field team has begun practices and will open its season at 10 a.m. Dec. 4 at the Greg Page Cornell Relays in Ithaca.