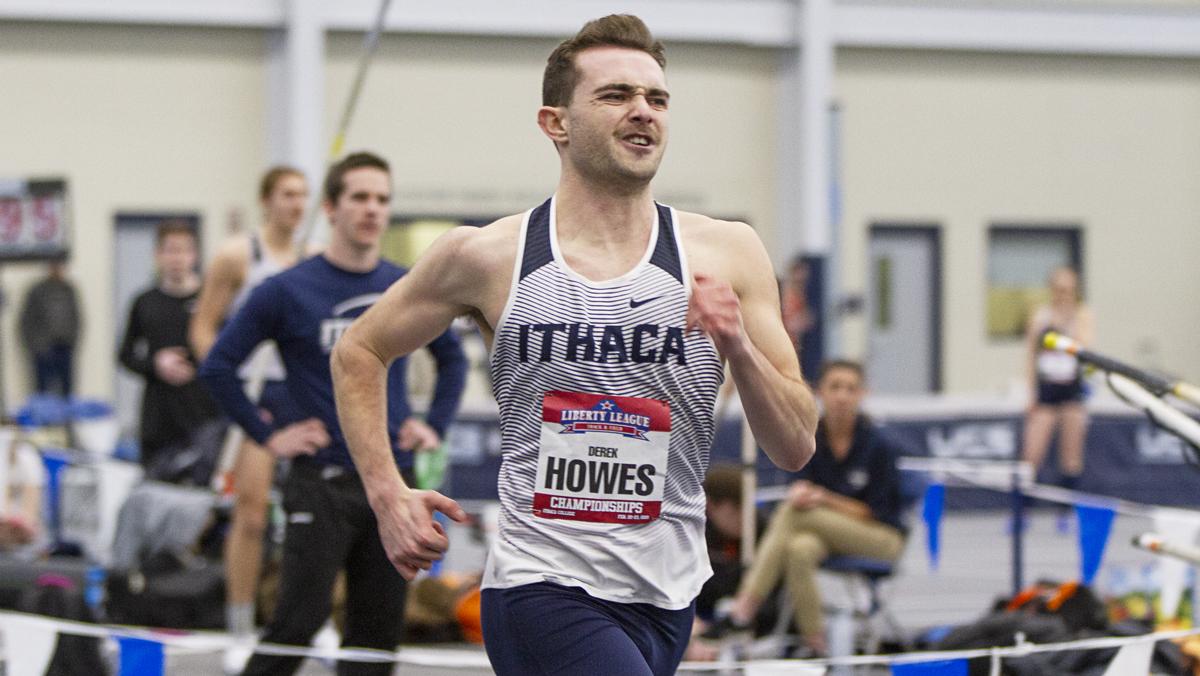 JULIA CHERRUAULT/THE ITHACAN
Senior runner Derek Howes competes in the 800-meter run at the Liberty League Indoor Track and Field Championships on Feb. 23. Howes has also competed in the 200 and 400 for the Bombers.
By Mikayla Rovenolt — Staff Writer
Published: March 18, 2019

After claiming its second consecutive Liberty League indoor title this winter, the men’s track and field team is aiming to continue its success during the spring season.

Senior Derek Howes was one of six men’s track and field athletes to be named to the United States Track & Field and Cross Country Coaches Association All-Region for the Atlantic Region. Howes finished in second place in the distance medley relay at the All-Atlantic Region Track & Field Championships and had three second-place finishes at the 2018 Outdoor Track and Field Liberty League Championships.

Staff Writer Mikayla Rovenolt sat down with Howes to discuss his origins with the sport, the team’s goals and how he hopes his final season will end.

Mikayla Rovenolt: Why did you choose to run track in college?

Derek Howes: I did it through high school, and I really loved it. It’s kind of a special sport: It’s very individual, but you still get that great family. I really like having control over my own zone but also having that brotherhood that goes on throughout it. I wanted to continue that through college because I knew it was going to get more serious.

MR: What do you feel are your main strengths?

DH: I think I eat really well. It’s kind of hard because some things work for some people even in racing strategy. I think the thing that works for me the best is I’m really good at not slowing down. I can just keep going, which helps me perform well, and I really like contributing to the team. Getting points in that way is really the only way I can do it.

MR: What are your goals for this year, being your final season?

DH: I would really like us to perform well in the outdoor season. One of our goals was to win Liberty League Indoor, which we accomplished. We did it really well — not better than I expected, but I was really impressed with the team and that [win] made it so the seniors this year have never lost an indoor season, which is really cool for us. I’d just like to see everyone improve outdoors and go for the outdoor title because that’s something that we’ve never won before, so it’d be awesome to get it.

MR: What obstacles have you had to overcome to get to where you are now?

DH: One obstacle I’ve faced, and I know some of the other guys have faced, is getting a lot of anxiety before a race. Whenever I think about it, it doesn’t make sense because it’s something I’ve done for about eight years, but it’s kind of hard to get over because it’s just a snap. It’s not like a game where you can come back. This is your performance and you have less than a minute to do it. You want to do it perfect and be better than the last time, and that’s a lot, even though you should be able to do it because it’s what you train for. It’s definitely something I’ve had to overcome. I’ve worked on breathing exercises and thinking through it, and I think that’s a big obstacle for a lot of people on the team, but we’re working through it all the time.

MR: What have been your major highlights/achievements as an Ithaca athlete?

DH: I think the friendships are important. You can count all the wins and places that you want, but it’s really the friendships that I’ve made on the team that hold the most value. And, obviously, all four years of winning indoor is a big thing too. It’s something to brag about.

MR: What is your favorite track memory?

DH: My favorite track memory was my sophomore year at Empire 8. It all came down to the final 4×4 relay, which I was on, and our team was just going insane. We were in this dome and they were cheering us on like they always do, but it was really intense at times, and we were going for the win and just nudged the [opposing team] out and beat them at the end of the race. Our entire team exploded. I couldn’t really see that well because I was dizzy and just raced, but I could feel the energy coming from them and it was just this amazing togetherness and victorious moment.

MR: As a senior, what do you hope to leave the team with?

DH: My freshman year the seniors were really great about forcing the social aspect onto us because they understood that that’s what’s most important for us as developing people. I really hope that the underclassmen don’t get too serious about the competitive performance. I would rather not be on the team than be good and not have fun. I want them to prioritize the fun rather than the accomplishment because the fun is really why you’re here.