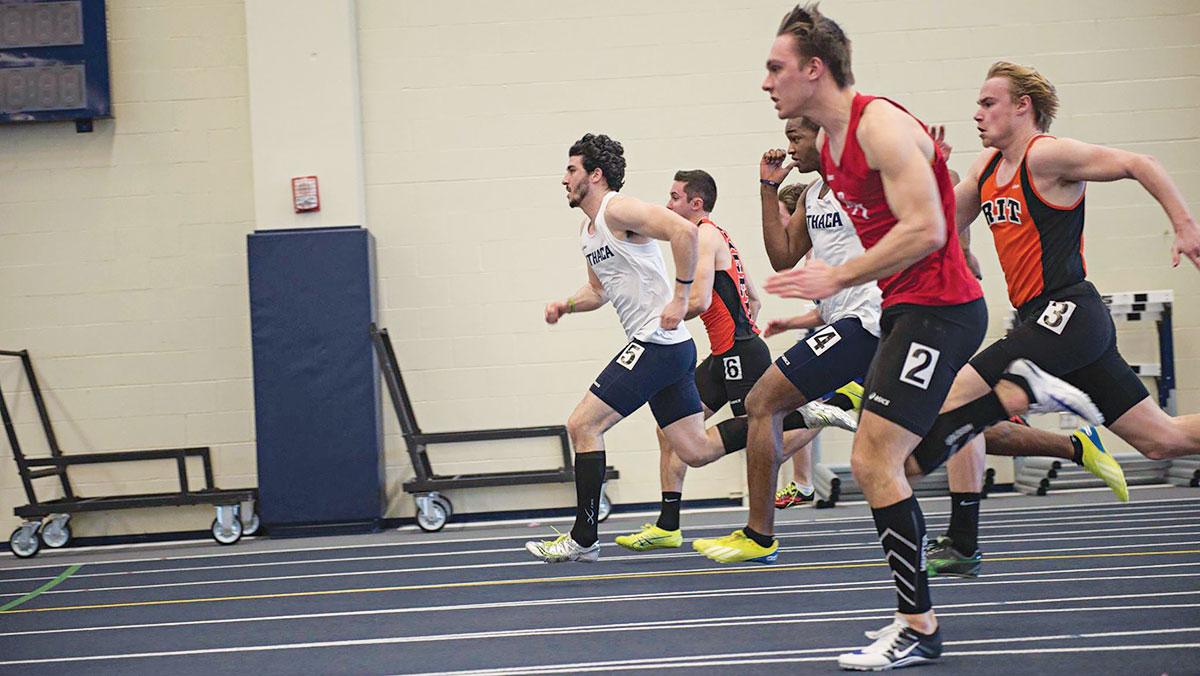 Finishing its last outdoor season second at the New York State Collegiate Track Conference championships, the members of the men’s track and field team have set high standards for themselves and are determined to finish on top this upcoming outdoor track and field season.

Continuing to build on success and performing at high levels of intensity will be the key for the team for the 2016 outdoor season. This year, the Bombers were able to recapture the Empire 8 Indoor Track and Field Championship from reigning champion St. John Fisher College after a disappointing loss last year ended the Bombers’ seven-year streak as track and field indoor conference champions.

After years of hurdling for the Bombers, senior co-captain Alex Schneider said he understands the significance of regaining their spot at the top of the food chain.

“Winning the indoors Empire 8 Championship was huge for our team,” Schneider said. “It gave us a lot of confidence going into the outdoor season. We want to continue to succeed and perform at the highest level we can.”

On the opposite side of the spectrum, the Bombers faced a heartbreaking loss in the conference championship of last year’s outdoor track and field season. Unable to sustain their eight-season championship streak, they fell to St. John Fisher College.

Schneider said last year’s loss was not factored into the team’s original goals.

“I wouldn’t say the loss has put more pressure on us,” Schneider said. “We underperformed last year during States. However, we won the indoor Empire 8 Championship, so we know we can still perform at high levels.

Senior Andrew Brandt said he is looking forward to seeing how he and his teammates compete in the outdoor weather.

“I’m excited to see how we compete outside because it’s usually a bit tougher,” Brandt said. “But for us, we usually compete a lot better outdoor than we do indoor, and coming off having won E8’s for indoor, I hope we keep this momentum and continue it for the outdoor season.”

The South Hill squad saw a large portion of its success during the outdoor season come from the performances from the upperclassmen.

Junior Larry Cass was one of the Bombers’ best field performers. Cass recorded the top distances for the Blue and Gold in discus and hammer throw with marks of 37.43 and 51.86 meters at the conference outdoor championships and the NYSCTC Outdoor championships.

With 17 freshmen joining the squad, the men’s team has fresh legs that are ready to give it their all on the track, despite the rigorous weather the outdoor season entails.

Freshman Peter McGowan said he is looking forward to his first collegiate outdoor season as he competes in the 60-meter and 200-meter sprints as well as the 4-x-200 meter relay.

“Certain events we do indoor are different than the stuff we do out- door, such as the 200-meter is run on a 400-meter track, so it’s a quicker race outdoors,” McGowan said. “I am excited to see the transition. We are starting to taper down and getting faster. I look forward to what is to come because everyone is running really good times.”

This article has been updated to two errors. The statistic of then-sophomore Andrew Ward’s team-high height of 1.85 meters in the high jump at the Empire 8 Outdoor Track & Field Championships April 19, 2015 has been removed due to the fact that it was not the team’s top mark in the event at that meet. Then-junior Andrew Brandt leaped for a higher mark of 1.90 meters at the meet in the high jump. Also, Ward’s time of 16.45 seconds in the 110-meter hurdle at the Muhlenberg Spring Invitational on April 4, 2015 was the best time for the team at that meet, not for the entire outdoor season. The statistic regarding Brandt’s team-high distance of 39.25 meters in the javelin at the Ithaca College Tuesday Meet on April 21, 2015 is incorrect and has been removed as well. Brandt’s mark was the third-highest at that meet for the Bombers.