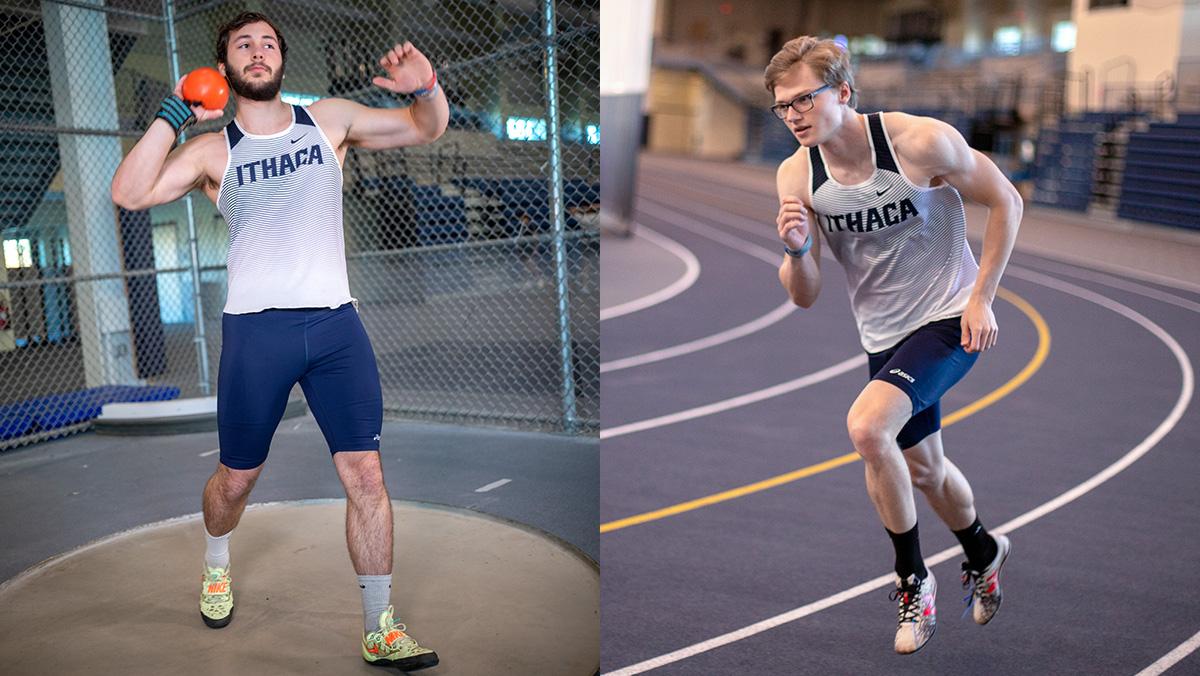 Following a second-place overall finish in the 2022 Liberty League Indoor Track and Field Championships, the Ithaca College men’s track and field team has its eyes set on the top of the mountain for the 2022–23 indoor season.

Multiple Bombers set indoor records for the college season. One of the team members who broke a previous record was senior Andy Frank. Frank broke the college’s 200m dash record with a time of 21.64 seconds Feb. 11, 2022, at the RIT Invite. Frank said the performance was one that he expected coming into college, since he expected the highest success out of himself.

While the team did not come in first  –– Frank said that falling short of first place was disappointing –– not all was lost at the meet itself.

“Nothing brought me more joy than seeing people on that Liberty League podium that didn’t think they’d be anywhere near close to that at the beginning of the season,” Frank said. “So that was something that I took a lot of pride in.”

While last year’s accomplishments are impressive, head coach Jim Nichols said the team cannot get hung up on last year’s results and should focus on the upcoming season.

Nichols said the three first-year students he’s most looking forward to seeing this upcoming season are sprinter Ethan Aguilar and hurdlers Brett Atkins and Matt Lokshin. Both will make their debut at the Greg Page Relays on Dec. 3 at Cornell University.

Nichols said that losing thrower Luke Tobia ’21 to graduation will be felt. Nichols said that while it will be tough shoes to fill, Nichols named senior thrower Justin Showstead as someone who can step up to the challenge.

“So, not that he’s a replacement for Luke, you don’t replace somebody,” Nichols said. “But next man in next man up is what … the philosophy is.”

Showstead had a nice performance at the Liberty League indoor championship, placing first in the shot put event with a throw of 15.12 meters. While he fell just short of nationals, he said he is using that as motivation for the upcoming season.

“I missed nationals for indoor by less than a foot for shot put,” Showstead said. “I was 21st, so I was the first person that got cut from nationals  last year. I’m just really looking forward to getting back out there and actually making it this year.”

Showstead said he believes heading into this season with first place in the shot put event will help him put on the best performance so far during his time at the college.

“I was really tense, and I just really wanted to do well this year,” Showstead said. “I’m just more relaxed and I’m just taking it day by day and having fun.”

While the first meet for the team is not until Dec. 3, the team has been practicing since the start of the academic year.

“We have a long stretch of months where it’s our guys getting in five days a week together,” Frank said. “Getting these relationships, build them up and build that trust and the chemistry that we need going forward, as well as the physical attributes. So it’s not only just the physical training but also getting these guys closer.”

While the goal is to win the Liberty League indoor championship, Frank said he is looking forward to picking up where he left off and building upon what he did last season.

“Last year was the first year I had made it to the national meet, but it was something that I always knew that I could do,” Frank said. “But I’m not satisfied with just making it. I had a lot of success but just not enough to satisfy me. Fifth place in all of America is great, and it’s a great achievement. But to me, I’ve always wanted more.”

Looking ahead in terms of the competition, Nichols pegged the team that outscored the Bombers for first place in the championship last year as one of South Hill Squad’s tougher opponents: the University of Rochester. Nichols also said he expects the Rensselaer Polytechnic Institute (RPI) as another opponent that will be a challenge.

“RPI is always a traditionally strong competitor for us,” Nichols said. “They’ll have a really strong group of distance runners. But it’s a balanced program.”

While the team expects a strong performance, Nichols is excited to tackle the new year’s challenges.

“Every year is unique because you have a unique set of athletes and a unique group of coaches that are working with each other,” Nichols said. “You have your first group of people that are freshmen for the first time ever, and you have guys that are seniors, for the first time ever being senior leaders. Team chemistry is going to be very, very important for the team’s success, and how the guys get along together and work together and encourage each other to get better.”

The Bombers first meet of the season will be the Greg Page Relays on Dec. 3 at Barton Hall up on the East Hill at Cornell University.