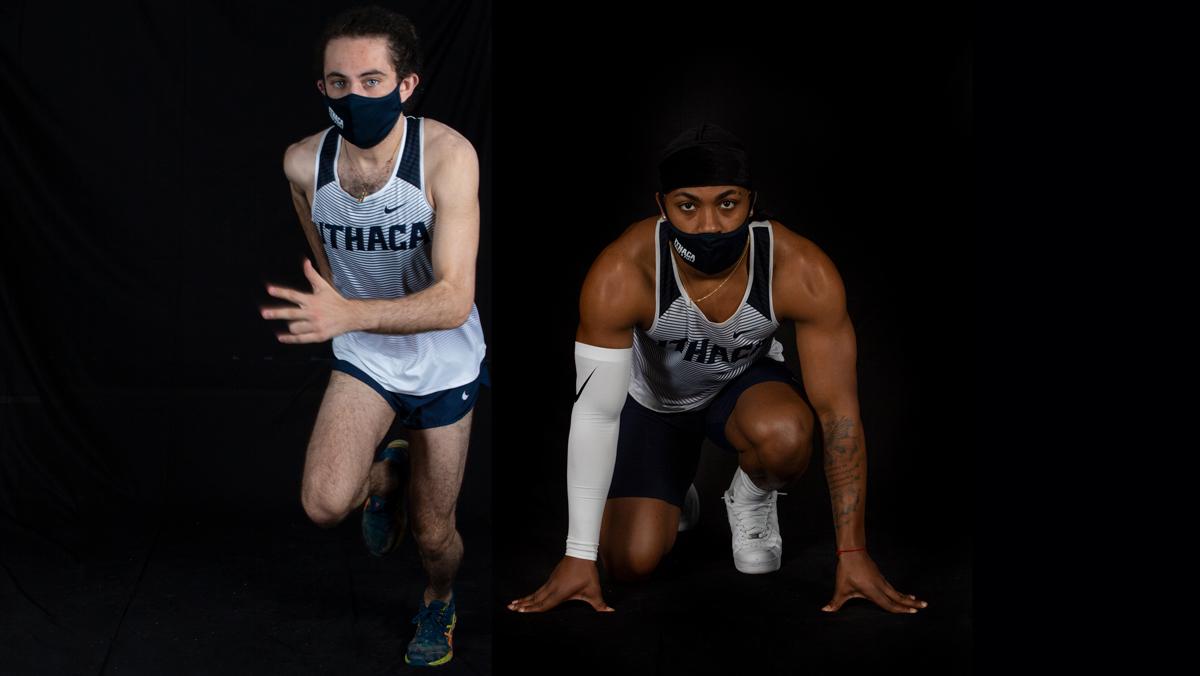 Ash Bailot/The Ithacan
Senior Ben Tiber and freshmen Jalen Leonard-Osbourne will make their marks on the track for the Bombers this spring.
By Quintin Pelzel — Contributing Writer
Published: March 25, 2021

It has been a long hiatus for the Ithaca College men’s track and field team members, who were sidelined for a year because of COVID-19. The Bombers will participate in outdoor events for the first time in nearly two years and will look to capitalize on the opportunity to finally compete again.

The last time the South Hill squad was in an outdoor event was in Spring 2019, when they placed third at the Liberty League outdoor championships. The team will look different due to the roster turnover between the last two years and now. While 27 seniors have graduated and have moved on from the program, the Bombers have welcomed 31 freshman athletes to the program.

With many inexperienced underclassmen joining the program, there is added pressure for head coach Jim Nichols to have his team prepared for the upcoming season amid the COVID-19 pandemic.

“The challenge for me is there is nothing to compare it to,” Nichols said. “This is the first time that we’ve gone through this type of situation. Every day is new and different. We have to adjust on the fly.”

The Bombers placed first March 6 in their first indoor meet in exactly a year, totaling 208 points. In addition to the team finishing in first place, two school records were broken. Freshman Jalen Leonard-Osbourne won the 60-meter dash in his collegiate debut with a time of 6.92 and ranked 12th in Division lll overall.

“I was actually expecting to run a little faster,” Leonard-Osbourne said. “I was a little sore. … The feeling after I crossed the finish line was great because I knew I won.”

The Bombers have eight seniors on the team for the upcoming spring season. This number is comparatively small when looking at the two previous seasons, when they had 15 seniors in 2020 and 13 seniors in 2019 graduate. The underclassmen will rely on this year’s senior class to help them stay focused and prepared for the outdoor season.

“My motto for leadership is to lead by example,” senior Benjamin Tiber said. “Don’t actively try to be a leader because then you could get in the way and actually become a nuisance.”

Nichols said he has been impressed with what he has seen from this year’s seniors. Seniors Josh Endy, Alec Hofer and Hunter Stuart are helping the underclassmen adjust.

“Our seniors lost some opportunities to see leadership from the seniors from last year,” Nichols said. “Our seniors this year have been excellent leaders.”

While the Bombers have talent from the freshman, sophomore and senior classes, the junior class may have the most potential. Five total juniors took home first place honors during the Nazareth Invitational, and three others finished second in their respective events.

The Bombers’ goals for their success in the upcoming season are going to be contingent on how proactive they are in adhering to the health and safety guidelines by local health officials.

“The number one priority is doing things in a safe manner to keep our student-athletes healthy and safe in an environment that they can succeed,” Nichols said. “Our goal is to be the best we can be. Our goal is to be better than we were [in Nazareth].”

As for Tiber, he sees a lot of potential in the team and has his eyes set on setting new personal records.

“As a team, it’s hard to set goals when our season is unknown,” Tiber said. “Right now, the Liberty League championship is what we are hoping and striving for. However, track and field is mostly an individual sport, and we are always striving to set new personal bests. My personal goal for outdoor season is to break 4:00 in the 1500 meters and break 15:00 in the 5K.”

Leonard-Osbourne has some high individual expectations for the spring season.

“My goal is to break the 100–yard dash record and run 10.4 in the 100 this coming season,” Leonard-Osbourne said. “I know that I have to better myself overall and try to get better every day.”

The Bombers still await their official outdoor schedule from the Liberty League for the upcoming outdoor season.