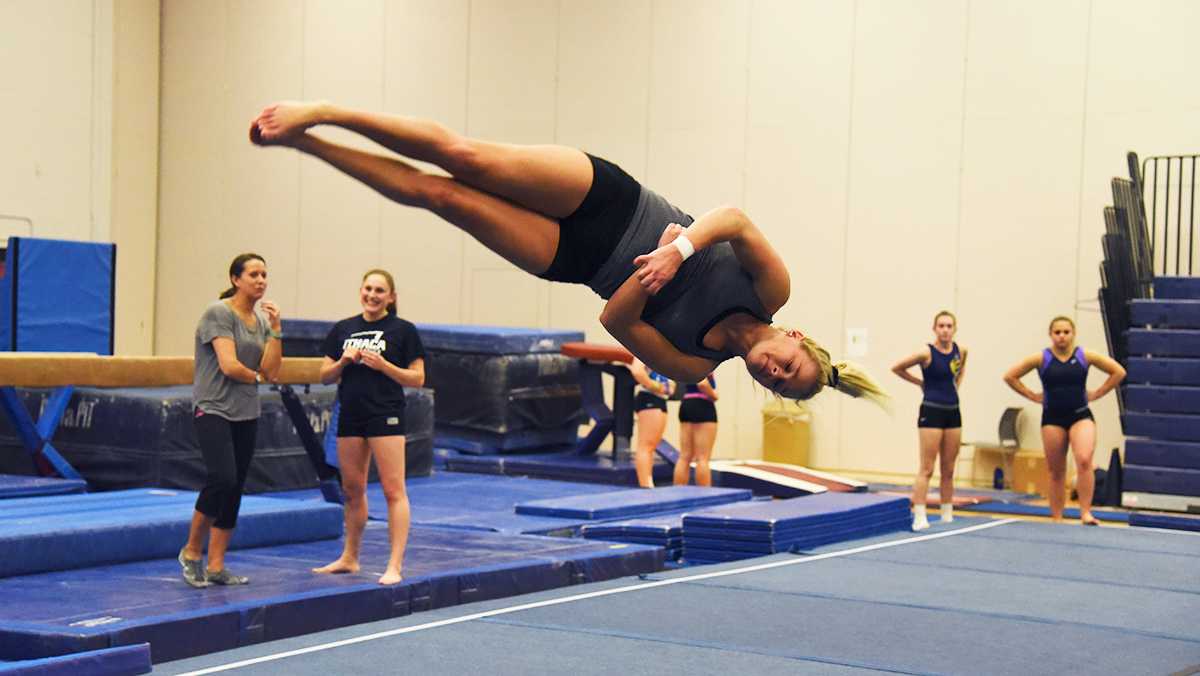 The gymnastics team is looking to bounce back after its 2014–15 campaign in which it earned a 3–11 overall record. The squad, which has some newcomers as well as strong upperclassmen, is determined to contend for the National Collegiate Gymnastics Association Championships this upcoming season.

Last season, standouts included sophomores Rachel Lee and Hannah Donnelly. Lee qualified individually for Nationals, where she competed on balance beam, placing fifth with a 9.675. Lee, who is currently out for medical reasons, qualified for Nationals based on how well she did throughout the season.

Head coach Rick Suddaby said he is expecting to win meets this winter because many of their competitions last year were tight contests, such as the one against Springfield College in which they were behind by only a point with a score of 184.65–183.675.

Suddaby said the younger team could contend for the national title, but it has some work to do. He said the gymnasts have been working on their routines on every event as well as their skill sets during the offseason. Suddaby said his goal is to get 10 gymnasts prepared for each event and will determine who will compete based on who is the best at each event.

Just like last season, the team is composed of mostly underclassmen, as there are eight freshmen and nine sophomores. As for upperclassmen, there is only one junior, three seniors and one graduate student.

Graduate student Valerie Cohen said she is looking forward to what this season has to offer because it is her last year and she wants to finish on a strong note.

“Each year the journey is different. There’s a different team each time, each with its own dynamic, but right now we’re in the best part of it,” Cohen said. “It’s still an open book. We get to write our own story every day.”

Cohen had an impressive season last year, competing in floor and vault. After the third meet of the season against SUNY Brockport, she registered her second score of a 9.55 in a row.

However, she said she has much she would still like to check off her bucket list in her last year, the biggest goal being to make it to Nationals again. The last time she went to Nationals was her freshman year.

“I am trying to make a few more dreams come true before my days of being a gymnast are over,” Cohen said. “But first and foremost priority is getting our team in a top-three spot at Regionals to qualify as a team to Nationals.”

Cohen said the freshmen that are new to the team bring depth to the squad, and she is excited to be able to compete with the newcomers. Freshman newcomer and all-around contributor Haley Lyons said she is looking forward to being part of such an amazing team because she shares the same goal of going to Nationals.

“It’s intimidating being a freshman on the team, but it is also an honor. I would feel blessed to compete even just one event for such an amazing team like this,” Lyons said.

Megan Harrington, a senior and all-around contributor, said she is working on some new tumbling passes on floor and a new bar dismount. Harrington did well last season on uneven bars and balance beam and earned an all-around career high of 37.75.

Harrington said the team is more determined than ever because not qualifying for Nationals last year was disappointing, but the squad will use its energy this year in hopes of making a run to Nationals.

Cohen said she thinks the team definitely has a chance of making it because they all have the drive and determination.

“It is going to be incredibly difficult, but we have all the pieces of the puzzle and we just have to put them all together,” Cohen said. “The league has come so far, and the competition is tougher than it’s ever been, but I genuinely believe we have what it takes.”

Practices are underway, and the Bombers will compete in their first meet Jan. 16 at Southern Connecticut State University.