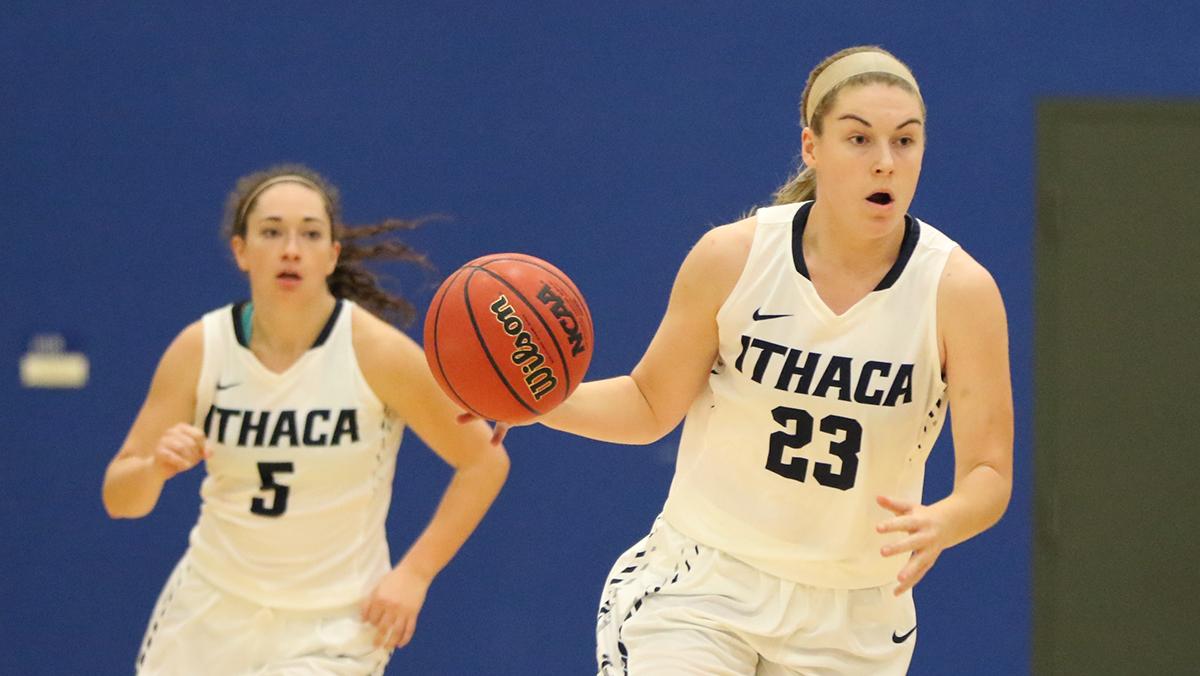 Junior Jordan Beers grew up on the basketball court, dribbling the ball along the sideline while her father coached the boys varsity team at Franklin High School in Franklin, New York. When the two of them weren’t at practice, they would be out on the driveway practicing.

Even though they spent so much time playing basketball together, she said her dad was never her coach.

“He was always at my games, but we didn’t have that coach-player relationship,” Beers said. “He was just my dad.”

Once Beers got to high school, she led her basketball team to back-to-back sectional titles, obtaining a 20–1 record during both of those seasons. She also played soccer and softball because those were the only other sports offered for girls at her school. With a graduating class size of 26, Beers said, if students didn’t play multiple sports, there wouldn’t be enough players for a team.

Beers said basketball was her passion, and that’s why she picked that sport to play in college. However, she said it took some time for her to adjust to just playing one sport.

“Coming to college and just playing basketball all year–round was so much different because I felt like I was going to get sick of it and not love it like I used to,” Beers said. “It was definitely a big change for me. But I wouldn’t want to be anywhere else playing any other sport.”

Head coach Dan Raymond said that when he was recruiting her, he knew she would be a good addition to the team because she understands the game and is able to take advantage of weaknesses in her opponents.

“When I first saw her, I thought, ‘There was no way we are going to get someone of that caliber player to play here because she could do everything,’” Raymond said. “On her AAU team, she played point, scored a lot, but also was able to distribute. She was a total player. She couldn’t do much defensively, but from an offensive standpoint, she was really talented.”

After her sophomore season in college, she earned an All-Conference Honorable Mention for leading the team in scoring, averaging 10.8 points per game. Beers had a career high of six assists against SUNY Cortland on Dec. 1, 2015, and a career high of 24 points against St. Lawrence University on Dec. 5, 2015. She finished the season with 282 points, 107 rebounds and 62 assists.

Senior forward Erin Ferguson said Beers is willing to put her body on the line and take charge to secure the win.

“She’s the type of player that if you are down two with 10 seconds left, she wants to take the shot,” Ferguson said. “She wants the ball in her hands. At the same time, if her teammates are having a great game, she’ll get the ball to them because that’s where the best decision she thinks is.”

Raymond said he is hoping for Beers to step up even more as a leader this season because of the impact her competitive drive has had on the team in the past.

“Her teammates respect her drive, her passions and her ability,” Raymond said. “She was a kid who it took some time for her teammates to get to know her and for Jordan to get to know them. She was a little shy, introverted, but now in her third year here, she has come out of her shell and gets along really well with everybody. That respect factor is there.”

Ferguson said that since Beers has stepped out of her shell, her team has been able to see how competitive she really is. She said Beers will do whatever it takes to succeed in the moment, whether it be a game, doing drills during practice or working out in the weight room.

“When she does lose, she is going to find a way to win the next drill,” Ferguson said. “She doesn’t care if it’s shooting, team drill, she doesn’t want to lose, even if there’s nothing on the line.”

Her competitive mindset and hard work were recognized by the Empire 8 her freshman year when she was awarded Rookie of the Week for the week of Dec. 10, 2014, something she said said she was not expecting.

“I definitely wasn’t expecting it at all, and it was a nice accomplishment,” she said. “I couldn’t have done it without my teammates giving me confidence and helping me out, being a freshman.”

She said she is hoping to improve consistency this season by pushing her teammates to do the best they can.

“Everyone has that drive to compete and win, so it’s just so much fun to play every day, even at 6 a.m. and have a practice,” Beers said. “I’m looking forward to it because I know I enjoy the company.”