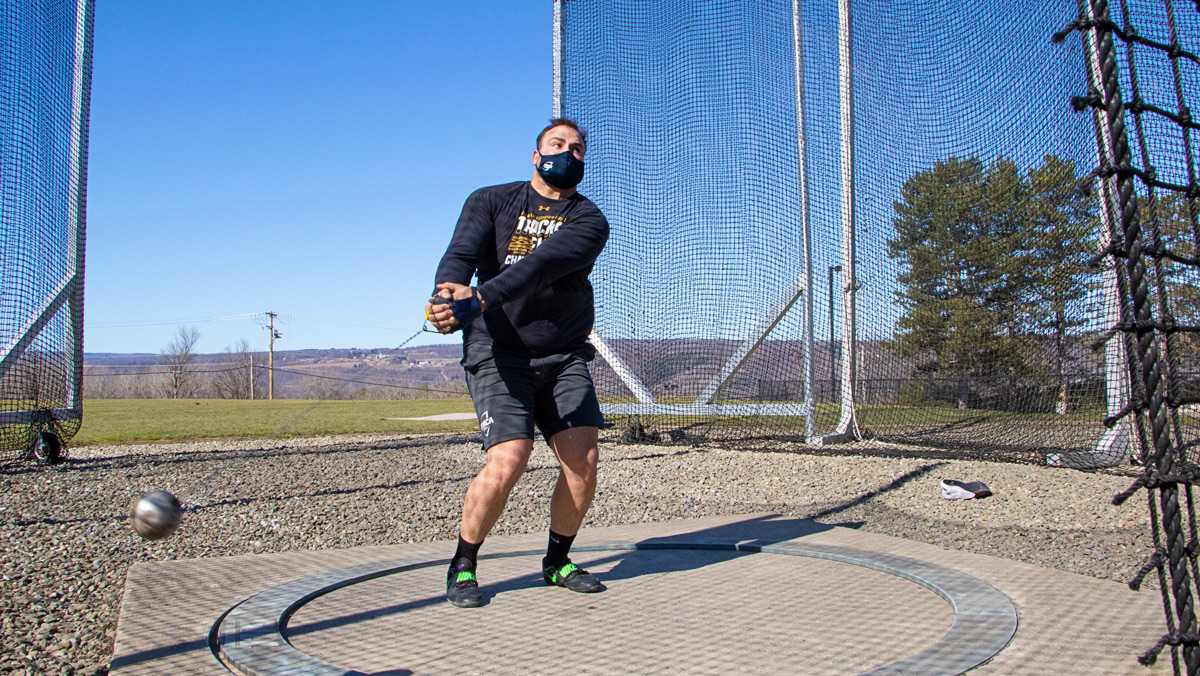 On March 12, 2020, then-sophomore thrower Luke Tobia stood outside a hotel in Winston-Salem, North Carolina, where the Ithaca College men’s track and field team was staying. The Bombers were set to compete in the NCAA Division III Indoor Track and Field Championships on March 13. Just moments prior, Tobia found out that the national championship was canceled due to COVID-19.

“I remember going out to the parking lot to call my dad,” Tobia said. “My parents drove down to watch me compete, and I was just shocked. There were probably 50 or 60 people outside in the parking lot. People crying, on the phone, people giving each other hugs. For a lot of these people, it was their last shot.”

After his first opportunity to compete for a national championship was canceled, Tobia said he and the rest of the track and field team hoped for a chance to compete outdoors, but they found out quickly that they would lose that season too.

However, this did not mean extra time off for Tobia. It just meant it was time to start training for football. 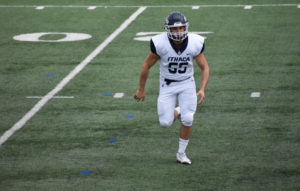 Tobia plays on the defensive line for the Bombers football team.

In addition to throwing for the Bombers, Tobia also plays defensive lineman for the college’s football team during the fall. He said he was recruited out of high school to play football for the college, but was convinced by Tyler Burdoff, former assistant track and field coach, to compete in the shot put, discus and hammer throw events once he arrived on campus. Tobia said that he felt lucky to have another season to look forward to.

“It’s kind of a unique situation for me,” Tobia said. “A lot of people didn’t get the opportunity of looking forward to something, so a lot of people seemed to have a sense of hopelessness, where for me it was like, ‘Alright, well, I don’t have track, but at least I have football,’ and vice versa.”

Between football, indoor and outdoor track and field, Tobia’s only time off from competition is the summer. He said that competing nearly year-round has benefited him mentally in both sports and has helped him overcome losing his past three seasons.

“I think it gives me a competitive edge just because I’m in it year-round, so I get a lot of experience just in competition itself,” Tobia said. “I’ve always had an ‘adapt-and-overcome’ mentality. Whatever the situation is, you got to just take it and do whatever you can with it, especially now. You can’t take anything for granted.”

Tobia’s mindset has not been overlooked by his teammates. Junior defensive lineman Ed Longest, Tobia’s roommate since freshman year, said he has noticed this mentality day in and day out.

“He shows up every single day with a great attitude and level of focus,” Longest said. “He attacks the day with whatever it is he’s got going on, whether it be classes, school, practice, film sessions, things like that, and at a really high level of focus, attention to detail and effort that’s just contagious to be around.”

Tobia said this mindset has helped him transition from track and field season to football season not only mentally, but in his physical training as well. Head football coach Dan Swanstrom said the strength and power required to compete in the shot put and hammer throw events complements Tobia’s position as a defensive lineman.

“Picking up something heavy and throwing it a couple hundred times a day and being explosive can only help him be a better football player,” Swanstrom said. “It’s just going to make him a more well-rounded athlete. He’s added so much strength.”

Tobia is on the five-year track for accounting in the School of Business and said he plans to utilize his extra year of eligibility due to COVID-19 during his fifth year.

Now that Tobia is a junior, he said he has stepped into a leadership role in trying to help underclassmen become accustomed to both teams’ cultures. Swanstrom said as an upperclassman, Tobia will lead his teammates by setting an example of commitment for younger players.

“We’ve really kind of changed how we view leadership roles within this program,” Swanstrom said. “We want as many people leading by example as possible, and I think he can do that. … He will be a committed athlete on the field, and he’ll do it day in and day out, and people will take notice.”

Despite all of the obstacles the pandemic has brought Tobia, he said his goals remain the same. For football, he said he hopes to see the team win the Liberty League, then compete in the national playoffs and potentially win a national title. In track and field, he said he also wants to see the men’s team win the Liberty League followed by regionals, and then compete at nationals as an individual.

Jess Craven, a graduate assistant strength and conditioning coach, has been coaching the throwing events for the Bombers this season since Burdoff left to coach at Towson University in Maryland in the fall. She said since meeting him in January, Tobia has been very focused on his goals.

“He’s super driven,” Craven said. “He comes to practice every day and wants to work hard. He’s very determined to qualify for nationals, and return to where he was last year.”

Craven said Tobia brings a positive spirit with him to the throwing circle that makes himself and his teammates better.

“He definitely contributes significantly to the atmosphere of practice,” Craven said. “We try to keep things light and fun, and whenever Luke’s at practice, I think everyone’s engaged and having a good time. … I can feel the level of camaraderie rise when he is around.”