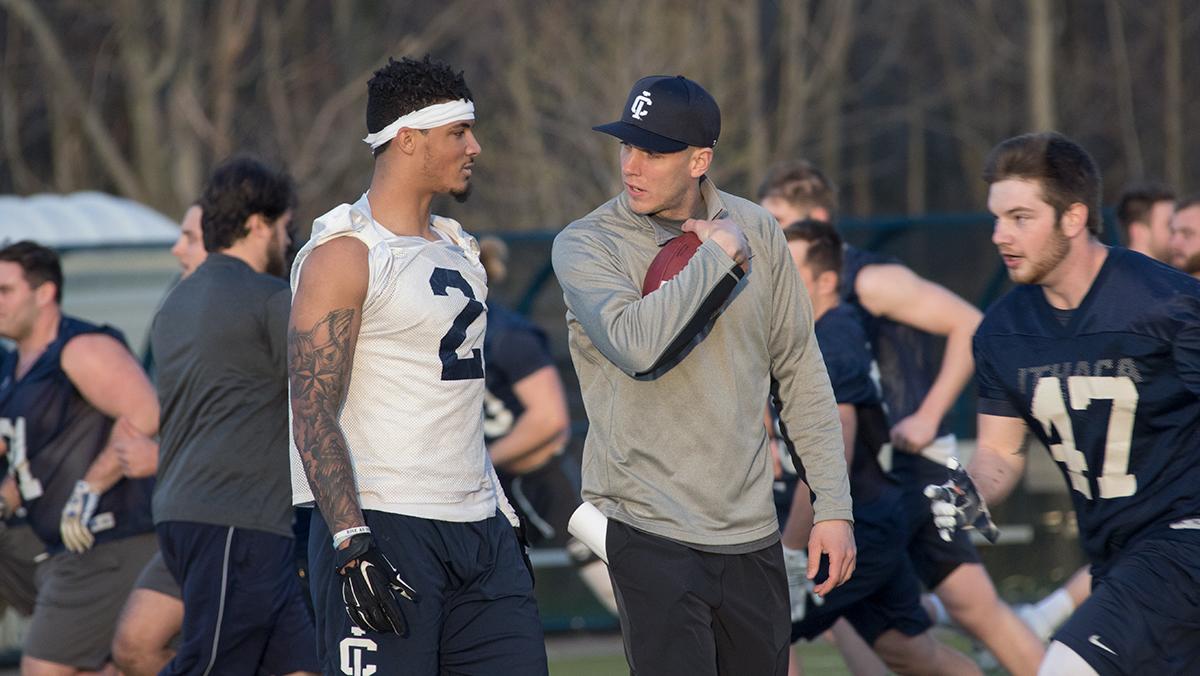 Wide receivers coach Reece Petty is used to playing and coaching in front of more than 50,000 fans. For him, game day was running out onto a huge Division I football field with his teammates and later, his colleagues.

Now coaching at a Division III school, the thrill is not from the fans, but from the players.

Petty was a wide receiver at the University of Kansas from 2006 to 2010. He had walked onto the team, which meant he did not receive an athletic scholarship, but he said he did not mind playing for free because of his love for the game. This is the same reason he said he wanted to coach at the Division III level — the players do not receive scholarships and play for the pure excitement of the game.

After graduating, he was an assistant football coach at Lansing High School in Lansing, Kansas, from 2011 to 2013, then a strength and conditioning intern for one year at his alma mater.

He was then a graduate assistant at Iowa State University from June 2014 to December 2015 and at the University at Buffalo in 2016.

As a graduate assistant, Petty was in charge of setting up drills and signaling plays from the sidelines, but he wasn’t able to coach as much as a full-time coach does.

After practice, he would import the film from that day’s practice so it would be ready for the coaches to watch.

Football head coach Dan Swanstrom said doing these tasks has already helped Petty with the few days he has been here.

“He’s helped the coaches with his ability to do some work with our computer programs and how he breaks down film,” Swanstrom said.

Even though Petty enjoyed his time on the Division I level, he said he was ready to spend more time coaching players.

Petty said he began looking at different schools that were looking for coaches, a process that prompted him to reach out to Swanstrom.

“Those guys are proven as who they are as evaluators of people, and that created the interest,” Swanstrom said. “Reece came here on an interview and did a tremendous job with his knowledge of football and the skill set of what it takes to play wide receiver. His mentality fit with what we are looking for on our staff, and once we got to that point, it was an easy decision.”

Swanstrom said he was looking for was someone who had energy, was excited to work and teach the players, and was not constantly looking for their next job.

“There are great coaches at all levels, and his product of who he’s become is because of the coaches he’s been around — that’s why we were interested in hiring him,” he said. “The levels we could care less about, but his education is what we care about, and he’s a great teacher.”

Petty said the coaches and teachers he has had over the years have helped him gain the knowledge it takes to be a good coach.

“I try to pride myself on being very knowledgeable about the wide receiver position,” Petty said. “Everything from technique to X’s and O’s. I’ve tried to really refine my craft the last few years. I want to help the wide receivers however I can.”

Junior wide receiver JR Zazzara said the knowledge Petty has gained from the people he previously worked with will greatly help the Bombers.

After working with the team for a little more than a week, Zazzara said, Petty has earned respect through his interactions with the team.

“The individual time that he has wanted to spend with us and [watching] film and how he incorporates us in the offense and working together already,” Zazzara said. “The earned respect part has a huge impact. On the field, off the field, taking coaching points and having a good relationship makes all that enjoyable.”

Petty said that so far, his time with the South Hill squad has been enjoyable and that he is looking forward to what the rest of the year and the fall season will bring.

“One of the first things I noticed is the pure enjoyment of the players here at Ithaca,” Petty said. “They love football. They are getting after one another and being competitive, and it’s been a lot of fun seeing that enthusiasm.”