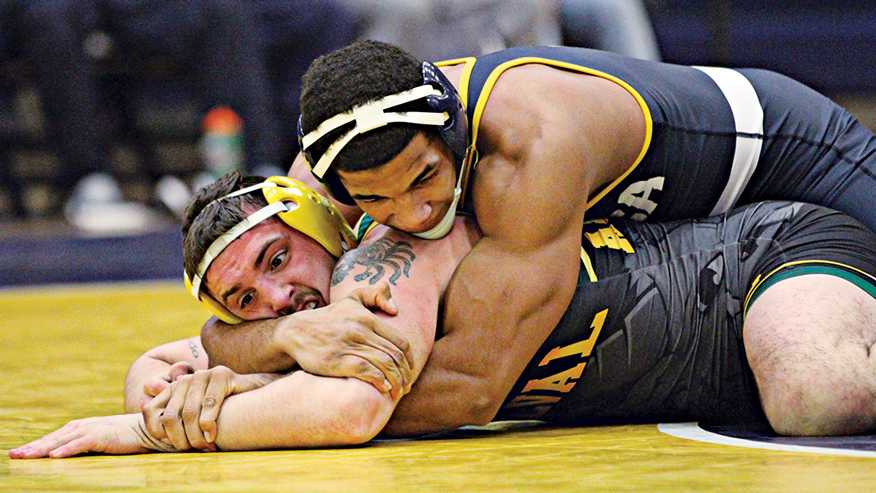 The Bombers were able to dispatch Nassau Community College, the reigning NJCAA national champions, on Jan. 29, 28–16.

Sophomore Nick Velez captured the largest win of the night for either squad, posting a 15–1 major decision win in the 165 lbs. weight class over Nassau’s Sam Schwartzapfel, giving the sophomore his 20th victory on the season.

Senior Zach Conner, however, recorded the most dominant victory for the Bombers when he pinned down Daniel Joseph at the 1:32 minute mark to earn the victory in the 197 lbs. division.

The Blue and Gold started out strong against Delaware Valley University, posting a 43–4 win that saw nine out of 10 Bombers claim victory.

Senior Dan Pak and Velez, ranked 10th and seventh in the country, respectively, recorded wins by fall early on in the first period in the 149 lbs. and 165 lbs. bouts, respectively.

Delaware Valley’s four points came in the final match when junior Zach Roseberry recorded a 12–2 major decision win over junior Matt Booth in the 285 lbs. bout to conclude the meet.

The match against Binghamton, a Division I program, began in the Bombers’ favor with Kaishian setting a high standard for the Bombers, defeating Binghamton freshman Steven Bulzomi 2–1 by the way of fall.

The South Hill squad found itself on the winning side of nine out of 10 matches against Delaware Valley. However, the squad would soon find itself on the opposite end of the spectrum against Binghamton.

Kaishian’s opening win would prove to be the only points for the Bombers in the second game, falling prey to the Bearcats 36–6.

Junior Nick Wahba almost claimed a second victory for the Bombers when he tied up his match at three late in the third period, only to fall just short in overtime 7–3.

Pak took a 1–0 lead early in his match, but he could not quite hang on, dropping his match 3–2.

Senior Zach Conner was able to post eight points in his match, the highest of any Bomber against the Bearcats, but came up seven points short of a win and lost 15–8.

Kaishian said wrestling a Division I school helped the Bombers realize what they are made of and how to compete against top quality teams.

“Gives us a chance to see what we need to work on,” Kaishian said. “The most valuable thing to have is when someone can exploit our weaknesses. We are a stronger team now than we were before we wrestled them.”

The Bombers will travel to Williamstown, Massachusetts, for the team’s next bout against Williams College at 11 a.m. Feb. 6, which begins a three-game road trip for Blue and Gold.