One candidate to run for new athlete SGA positions 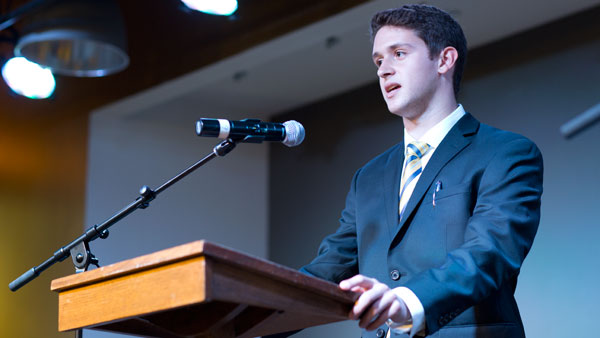 With a new year comes new opportunity for positions in the Ithaca College Student Government Association. However, this year’s lack of response to the new positions created for athletes raises concern if both club and varsity sports will gain full representation during the 2013-14 academic year.

There was little participation by the Bombers athletes, with Zane Shephard, sophomore track team member, the only applicant for the position of varsity sports senator.

Cedrick-Michael Simmons, president of the SGA, said the one application the organization received could have to do with athletes’ inability to commit to SGA, but they hope to expand it to reach their goal.

“We are going to work with the one student athlete to broadcast more,” Simmons said. “I think because it is a new position and athletes who may not be able to commit… they feel like they don’t want to get involved.”

Throughout last year, the SGA’s executive board discussed potential athletics representation, but has never found it to be pertinent enough to make a change.

“It came to our attention throughout the year that the voice from athletes really was not heard for things like the Fitness Center or the money spent on the A&E Center,” Recckio said. “So, we decided that there was a significant enough fraction [of athletes] on campus that both club and varsity sports should be represented.”

As the Club Sports senator and Varsity Sports senator, two students will have the ability to bring forward concerns for athletes that the SGA is unaware of, as well as to voice the opinion of athletes who do not participate in student government.

Junior cheerleader Angela Miranda said she fully supports the SGA’s decision because the athletes around campus need the representation to push their ideas through with the school.

“It is a great idea to have our voices be heard, because I feel like there is definitely not a lot of say for club sports at Ithaca College,” Miranda said. “I feel like we have to jump through a lot of hoops that someone else should be doing for us.”

Shephard said he was extremely enthusiastic to run for a Varsity Sports senator, because he wants to help student athletes be strong on the field and in the classroom by providing them with academic support.

“I was really excited, because I thought it was a position that was needed and should have been implemented earlier,” Shephard said. “It is crucial that every group is represented in student government, because it is easy to ignore their issues when they are not there.”

Shephard’s plans include creating an environment for student athletes that can help them excel on the practice field and in the classroom. He hopes to provide easily accessible tutors for student athletes, as well as incorporating ideas from the Student Athlete Advisory Committee, a separate group made up of athletic administrators and student-athlete representatives, and bringing them to SGA meetings to improve athlete success.

Now, the SGA must find a way to recruit athletes to run for the position of Club Sports senator on campus. Simmons said while the SGA is lacking an applicant, he has seen lone senators make a big difference in the campus community and create a great environment for groups at the college.

“We typically only have one international student senator, and the one we had last year did an amazing job advocating the voices of students of a small minority,” Simmons said. “The two athletes, once we recruit another one, will do an amazing job speaking on the behalf of their entire constituency.”