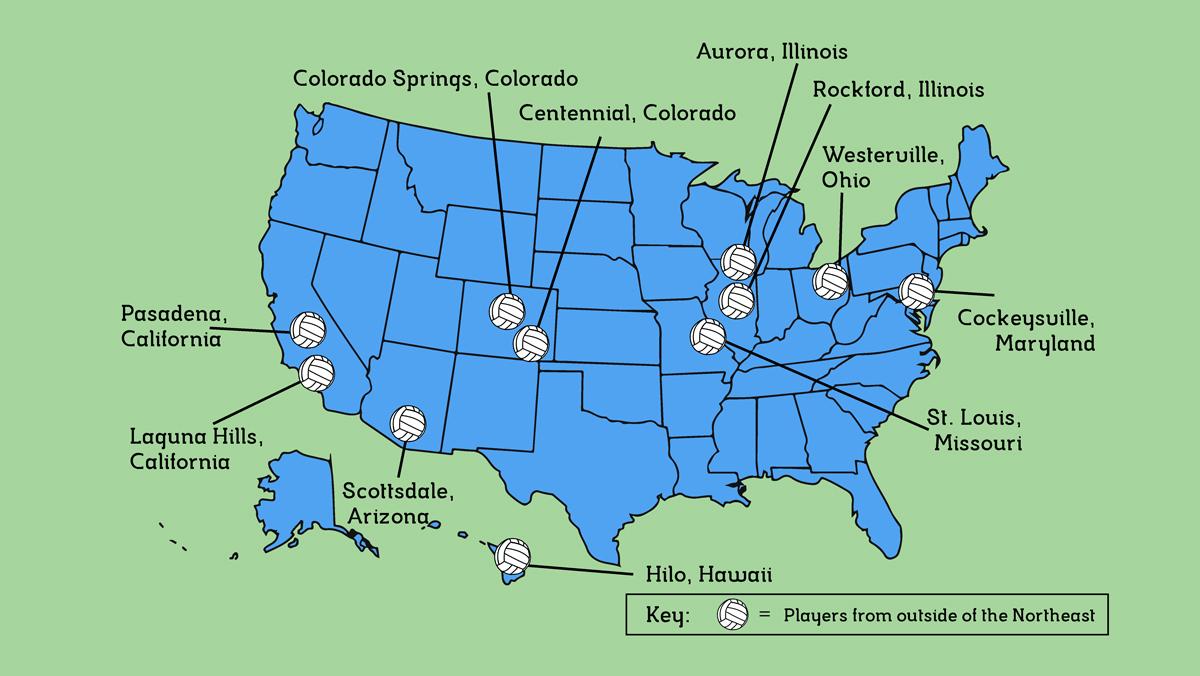 ILLUSTRATION BY MAYA RODGERS
The Ithaca College volleyball team is mostly represented by players outside of the Northeast region of the country. The graphic above shows where 11 players on the team are from.
By Matt Vander Plaat — Staff Writer
Published: September 12, 2018

Eleven out of a total 16 players in the volleyball program are from outside the Northeast, ranging from California, Arizona and even Hawaii. Many other sports programs find most of their athletes from the surrounding region and do not bring in as many athletes from other parts of the country.

Excluding the volleyball team, the college has 356 athletes that compete during the fall season, and only 43 reside outside of the northeast. Head coach Johan Dulfer said the volleyball team makes it a point to get the best high school athletes available, along with other players who fit the philosophy and direction of the program.

“We don’t have a preference of where players are from,” Dulfer said. “There definitely might be a benefit to having played club and high school in an area where volleyball is  traditionally strong, such as the West Coast or the Midwest. But, in general, we try to find the best fit regardless of geography.”

In Division III, there is not nearly as much scouting involved with high school players.Knowing this, athletes have to be persistent in pursuing their college careers athletically by emailing coaches and trying to get interest while still in high school.

Freshman libero Jordyn Lyn Hayashi, a Hawaii native, jumped on the recruiting process during her freshman year of high school and started talking to the college’s volleyball program during her junior year.

“I know that, since we are on the West Coast, our coaches had us start sending emails out to colleges instead of waiting for colleges to email us,” Hayashi said. “We are on a completely different island in the middle of nowhere and unable to go to the big tournaments where all of the college scouts are.”

Sports are taught differently throughout the country depending on where the programs are located and how well funded they are. Hayashi said that even though the players have grown up learning different ways to play the game, everyone plays well together on the college’s team.

“Everyone from all over the country has different playing styles,” Hayashi said. “We are all taught differently by different coaches, but when we come together, we click as a team. And it feels as though we’ve already played together before.”

Playing at the collegiate level can become more difficult when you move across the country to play. Dulfer said the idea of the college can be appealing to anyone from the Northeast or out West.

“We want players who are comfortable choosing to go outside of their comfort zone,” Dulfer said. “Going to school 3,000 miles away isn’t for everyone, and that’s okay, but for those who are adventurous to give it a shot, the rewards can be amazing.”

Junior outside hitter Taylor McCarthy, who is from Pawling, New York, said she does not think that it matters where her teammates are from as long as they have the right mindset.

“On our team, it doesn’t matter where you’re from as long as you’re committed to your fellow teammates, the program and the sport of volleyball,” McCarthy said.

Sophomore middle hitter Katherine Basey, who is from Scottsdale, Arizona, lived on the East Coast when she was younger. She said she wanted to come to New York at some point in her life, which is why enrolling at the college interested her.

She said that even though the players are from all over the country, volleyball connects all the players.

“I believe that sports bring individuals together,” Basey said. “I found myself welcomed into the program and was taken under the wing of many of the upperclassmen. With their guidance and support, life at Ithaca and my journey thus far in the program has been filled with amazing experiences.”

The volleyball program as a whole does its best to go out and find the best talent to get the program heading in the right direction, Dulfer said.

“We all try to go out and find the best players for our program,” Dulfer said. “And for volleyball, that means we look at anyone, regardless of where they may be from. Ithaca College has a truly national draw, and we hope to keep bringing in the best players from across the country.”