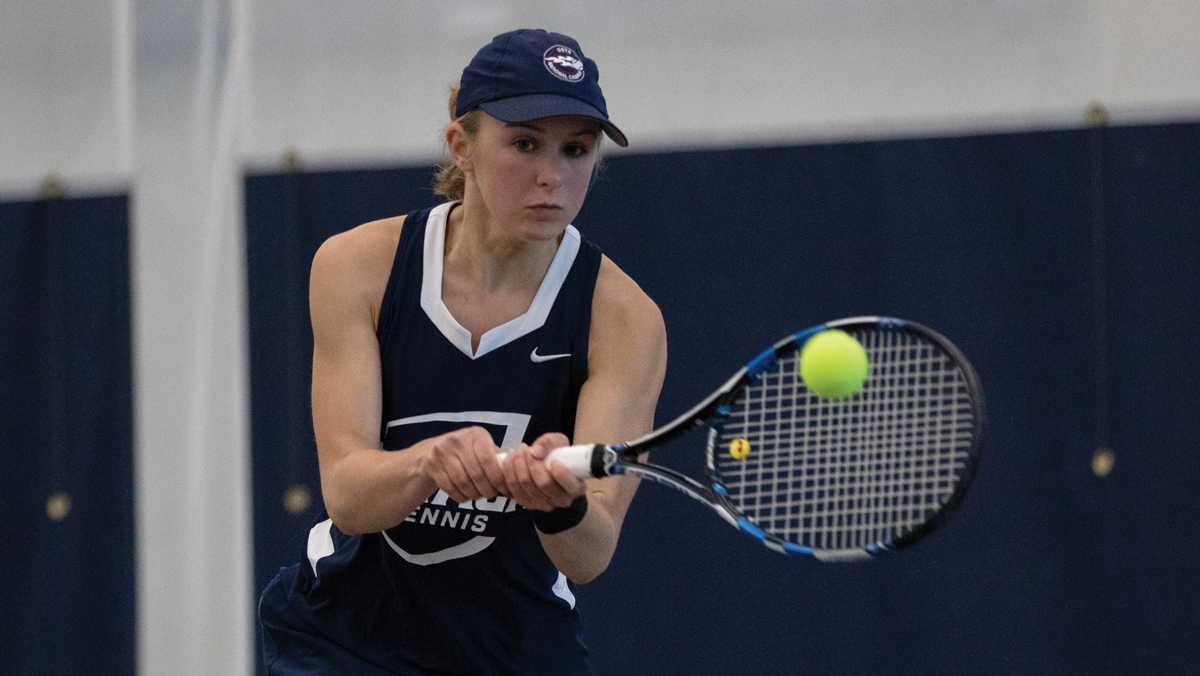 CAITIE IHRIG/THE ITHACAN
Brown warms up to compete against the Rochester Institute of Technology on April 5 at Glazer Arena.
By Caitie Ihrig — Photo Editor
Published: April 11, 2018

On March 15, senior Samantha Brown walked off the court with the biggest smile on her face after defeating Bloomsburg University sophomore Ashley Barebo in a tie-breaker exhibition match with a score of 13–11.

“I didn’t win a single match until spring break this year, and that was the best feeling in the world — when I finally did it,” Brown said.

Brown joined the Ithaca College women’s tennis team during the Spring 2017 season after taking two and a half years off from the sport. She decided to take a break because she was always in pain while playing, but the pain never went away. After being tested, Brown found out that she has ankylosing spondylitis, which is an autoimmune disease.

“As I get older, my spine is going to fuse together,” Brown said. “I will not have much range of motion, but there is no way to know when that is going to happen. It flares up at different times.”

Brown is an athletic training major and said that depending on the severity of the spine fusion, she might have to stop being an athletic trainer. She said there is no way of knowing what the impact on her life will be until it happens.

Brown said it is very hard to cope with the unknowns of ankylosing spondylitis.

“I have my ups and downs, and I’m not going to lie, there are some days when I’m in so much pain I break down,” she said. “It’s hard knowing this is the rest of my life, and accepting that can be tough in the moment, but so far those moments always pass.”

Brown said that her teammates know about her having ankylosing spondylitis and will make sure she is taking care of her body. She said she has had to change her lifestyle around by changing what she eats and doing yoga and aerobic exercise every day.

“They are very supportive, but are also no-nonsense and are like, ‘You have to be eating right. You have to be treating yourself right and getting the sleep you need,’” Brown said. “They know that I need those things in order to function pretty much at this point. It’s been pretty awesome.”

Tennis has a long history with her family — her great–grandfather Bernie Bogle was a gym teacher and tennis coach. Her grandmother grew up playing and encouraged Brown to play.

At the age of 8, Brown started playing tennis and would hit with her grandmother for fun. When Brown was 12, she played competitively for the first time after joining a summer league with her friends in middle school. Besides being on her high school team at Camden High School in Camden, New York, Brown also played on travel tennis teams and did tournaments with the United States Tennis Association.

While in high school, Brown was recruited by Daemon College in Amherst, New York, SUNY Fredonia in Fredonia, New York, and SUNY Cortland, but decided to stop playing. Daemon is a Division II school, while Fredonia and Cortland are both Division III schools.

“I just couldn’t see myself being happy playing tennis if I was going to be in pain,” Brown said. “I wanted to step away from it, but by the end of my senior year, I was kind of burnt out, to be honest. I didn’t think it was worth it if I was going to be feeling the way I was feeling all the time.” 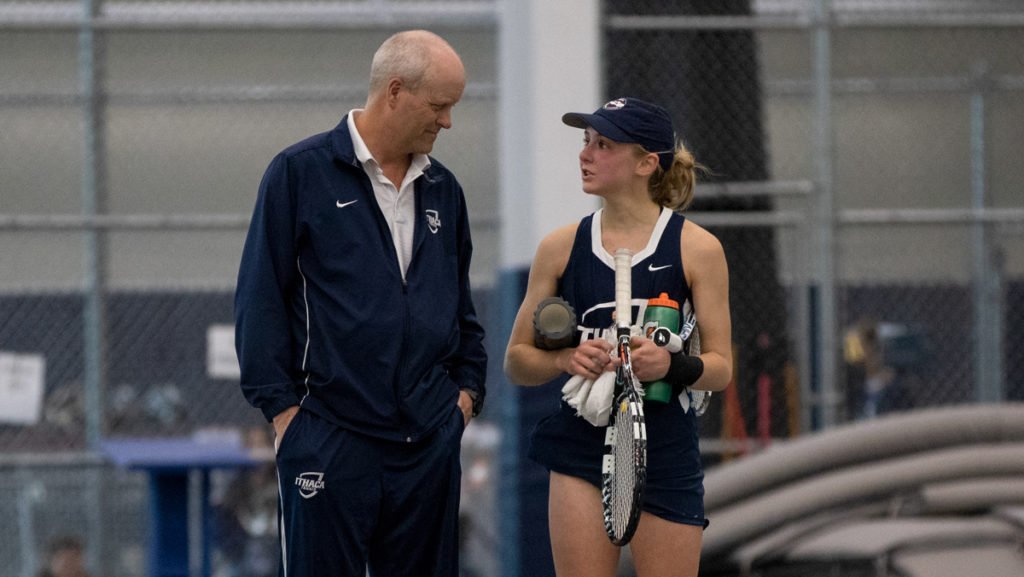 Head tennis coach Bill Austin stands next to senior tennis player Sam Brown as she gets ready to compete against the Rochester Institute of Technology on April 5 at Glazer Arena.

She also figure skated growing up and didn’t want to quit athletics altogether. After coming to the college, Brown joined the figure skating team. She competed for the first time during her sophomore year of college and won bronze for her performance to “How to Train Your Dragon” in the Preliminary Freeskate at a competition at SUNY Geneseo. She has also performed in three charity shows for the Cancer Resource Center of the Finger Lakes.

After two years of not playing tennis, though, Brown said she realized how much she missed the sport and decided to contact head coach Bill Austin.

“I missed playing the sport so much that it was like a homecoming, stepping back on the court,” Brown said.

Austin told her to come out to practice, and he would see how she played. Austin said he knew she was passionate about tennis after having her in Intermediate Tennis, a one-block class that develops tennis skills.

Once Brown starting playing again, she said, she did not play well because she had not played in two years but would spend extra time working with Austin and hitting against the wall to improve.

Austin said Brown would work on improving the basics and training her muscle memory because of all the repetition of movement that tennis has.

“I would be walking through the arena, and I would hear a tennis ball against the wall, and I couldn’t see down there, and I was like, ‘It’s probably Sam,’ and I would walk down, and sure enough, Sam’s down there and she’s just working,” Austin said.

Brown has played three singles matches and one doubles match since joining the team and lost all four. She has also played exhibition matches, which count towards her score but not the team score.

Junior Caroline Dunn, one of Brown’s teammates she knew before joining the team, said that even though Brown doesn’t play a lot, she has been a great support system. Dunn and Brown were in the same statistics class, and Dunn had seen Brown in the athletic training room but was never trained by her.

Brown said that playing tennis is the one thing that helps her feel better and keeps her motivated.

“It pushes me to be here, to be with my teammates, to get moving and to treat my body right,” Brown said. “If I didn’t have my teammates pushing me to be better, I probably wouldn’t take as good care of myself as I do.”

This semester, Brown is a part-time student and is finishing up her athletic training degree. She said being an in-season athletic trainer for the women’s track and field team and an in-season athlete can be stressful because she is always running back and forth between the Hill Center and the Athletics and Events Center. Though she has to miss practice at times because of track and field, she said it is a good stress because she wants to do both to the best of her ability.

“I don’t do much besides athletic training and tennis, and that’s the dream,” Brown said. “I get to do the job I love and play the sport I love.”