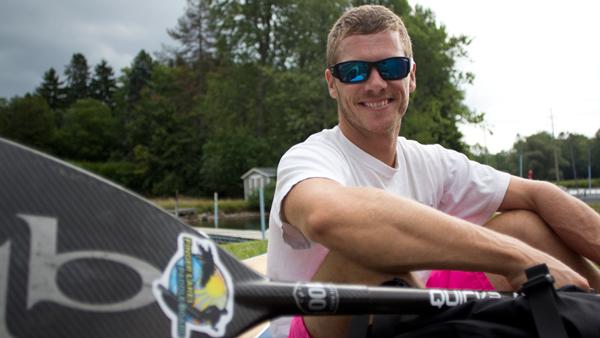 Traveling nearly 100 miles across the two largest Finger Lakes over the course of three days, one man hopes to draw attention to the land and water of the region and the need to conserve its natural resources. Cody White, a 31-year-old part-time resident of Auburn, N.Y., is making this lengthy trip standing on what is essentially a surfboard, propelling himself with a single oar. The sport is paddleboarding and the mission is conservation.

White will travel up Seneca Lake beginning early Thursday morning, continue across the Cayuga-Seneca Canal and then paddle down to the bottom of Cayuga Lake by Saturday night. The tour will help raise funds and awareness for a local conservation non-profit, the Finger Lakes Land Trust, as well as the Cayuga Lake Watershed Network.

White’s venture will also highlight paddleboarding as a sport, which has seen popularity on the West Coast but hasn’t fully developed in the region — something White hopes to remedy with his company, Finger Lakes Paddleboard, which he founded in the spring of 2010 in Auburn.

White said the technique and basic structure of paddleboarding was adapted from Polynesians standing in canoes. Now the sport has specifically designed boards, rather than a surfboard — or outrigger canoe — and other upgrades that allow for a more efficient ride.

Standing on a paddleboard is similar to standing on a surfboard in that every little leg muscle is used to keep the board balanced on the water. The oar is used to propel the board forward and backward or turn. The ability to stay on the board requires all core muscle.

White said he’s had a connection to the water since his days growing up in the Finger Lakes region. White also lived in Lake Tahoe for a while. It was on the West Coast that he was first introduced to the sport of paddleboarding. When he made a trip back to Auburn to visit his family, he noticed that no one was paddleboarding on the lakes.

“In California, paddleboarding is everywhere,” White said. “I did some searches online and noticed that there wasn’t anything here. There was an option to actually start a business and do that as opposed to competing against people [out West]. I could really get it started right and build a community, get people understanding the correct way to do it, which we’re definitely trying to lead in safety and knowledge.”

White’s planned tour of nearly 100 miles is quite extensive in comparison to paddleboard races. He recently competed in a paddleboarding race around Manhattan, totaling 26.5 miles, which is one of the longer races held in the U.S.

However, White said he is not concerned about the significant mileage he’s about to rack up.

“When you get standing and paddling, you can go for quite a while if you have the right technique without really being exhausted,” White said. “The longer the race, generally it gets torturous towards the end, but you can just kind of get into the pace. So when I’m paddling [Seneca and Cayuga] I’m not going to be racing.”

Paddling the two lakes over three days, White will have the added weight of carrying touring gear with him. Beyond the basic safety equipment, White will also be carrying a couple gallons of water, more than a day’s worth of food, a tent, sleeping bag and tarp.

“I do have multiple stops set along the way, and it is the Finger Lakes, so worst case scenario I knock on a good neighbor’s door and say, ‘Excuse me, can I come in?’” White said.

White has several overnight stops planned during his trek, including points along the Finger Lakes Land Trust’s conservation lands and friends’ homes. He hopes this paddle will draw attention to the region’s resources and the projects of the Land Trust.

“We’ve been focusing recently on the last undeveloped lake shore along the lakes, and this is where Cody’s effort will support that,” Zepp said. “In particular, on the west side of Cayuga Lake, we recently acquired land that will allow us to create a public conservation area with 1,900 feet of undeveloped shoreline.”

Emily Eisman, the Land Trust’s outreach and membership manager, is helping coordinate White’s trip. She noted that the paddle is already a success.

“It’s meant as a fundraiser and an awareness raiser, so [Cody] has already done a pretty good job in getting the word out,” Eisman said.

White’s mission meshes well with the Land Trust’s, Zepp said, which helped pull this fundraiser together.

“What we do is work cooperatively with landowners and local communities to conserve those lands that are vital to the Finger Lakes and the character of the region,” Zepp said. “And the quality of the water very much depends on the land, and that’s definitely a focus of ours.”

Paddleboarding is contingent upon the water of a region, and White said the sport itself connects paddlers with the water in a way that can encourage conservation efforts.

In the midst of controversy over natural gas drilling in New York and issues with invasive species in the Finger Lakes, White said a consciousness of the region’s resources is even more necessary. Making the connection between conservation and sport simply helps increase that consciousness.

“It’s going to be pretty nice just to think, just to paddle,” White said of his journey around the lakes. “Just to kind of zone out and to let the paddle do what it does and go with the water.”