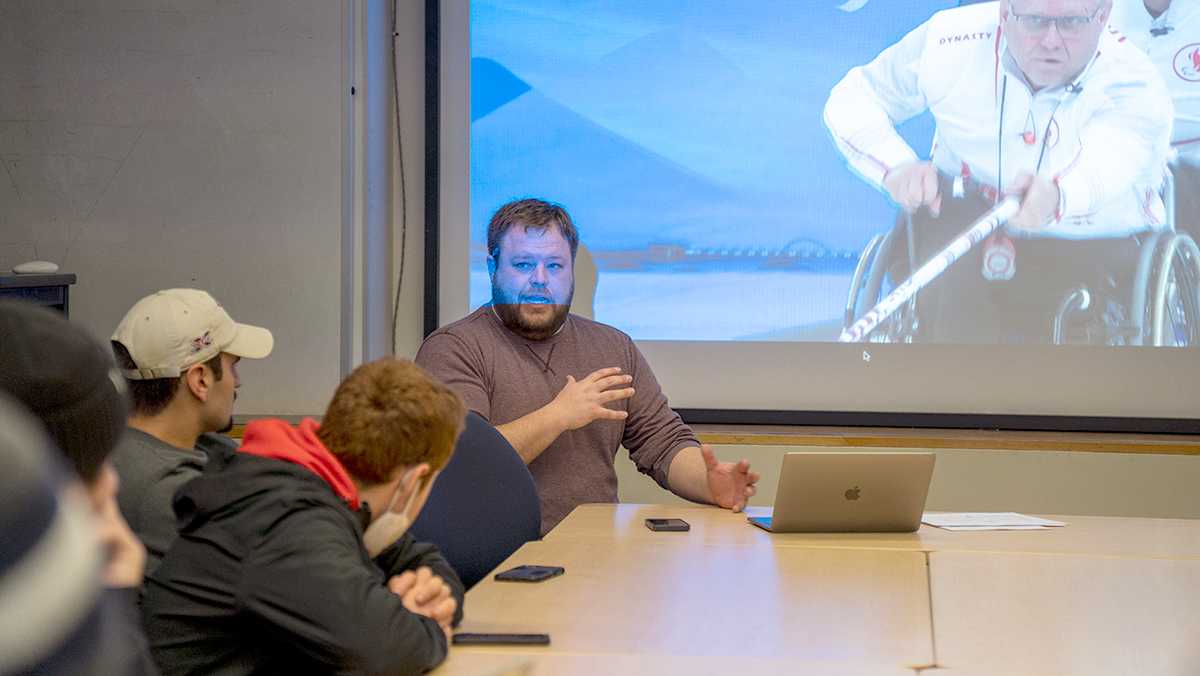 As the world has been tuned in to the 2022 Winter Olympics and Paralympics over the past month, Ithaca College students have had the opportunity to remotely cover the events through a new course offered in the Roy H. Park School of Communications.

The Department of Journalism introduced the special topics course Covering the Games: Olympics and Paralympics, for the Spring 2022 semester. The class is taught by Tim Mirabito ’03, assistant professor in the Department of Journalism. The class gives students the chance to collaborate with one another to produce content about the Olympic and Paralympic Games as they transpire.

He was initially approached by James Rada, professor and chairman of the journalism department, to give the class the green light. This topic goes hand-in-hand with Mirabito’s research interests in the intersection of sports media and tragedy as well as sport and disability.

“Dr. Rada suggested that I think about doing something related to the Olympics and my line of research is in part dedicated to disabling language, so it made a lot of sense,” Mirabito said. “He was super supportive about having this and gave me complete autonomy in structuring the class and putting the department’s support behind it.”

Mirabito said this course will shed light on the media coverage differences between the Olympic and Paralympic Games. The Olympics were held from Feb. 4 to 20 and the Paralympics span from March 4 to 13. He said the class gives students the unique ability to reflect on the contrast between the legitimacy of athletes with disabilities and the mainstream ways athletes with disabilities are portrayed, which tends to be marginalizing.

“The Paralympics have certainly become more popular and visible, but there’s obvious differences between the two,” Mirabito said. “I really want to have the students think about the use of language and how different opportunities lend itself to either marginalizing or enabling athletes, and sort of the discourse that surrounds them.”

Jayden Becker, a junior sports media major, said that he was not sure what to expect from the class going into it, but that Mirabito has opened up so many avenues for the students to build their own fun experience. He said the Paralympics coverage, in particular, adds an interesting element to the class.

“It’s a time of year that gets undercovered so I’m excited to take a deep dive inside the Paralympics,” Becker said. “Specifically when writing about the Paralympics, you really have to be careful how you phrase certain things, otherwise you’re adding to the marginalization that disabled athletes experience in day-to-day life, which is something that has really helped me as a writer.”

On a larger scale, Mirabito said he hopes that his students will be able to improve their skills in a variety of multimedia aspects by working in a real-life simulation of what they may encounter in an entry-level job, especially covering an event that is being held on the other side of the globe. Max Tanzer, junior sports media major, said one of his biggest takeaways so far is how realistic and unique the class environment is.

“At the beginning of my college career I didn’t really get a chance to simulate what a real working environment would be like and this class hits that to a T,” Tanzer said. “We really get a broad horizon of everything in the media realm, which is really valuable, because all of us have certain strengths and it forces us to go out of our comfort zones and be a little more versatile.”

While working in groups of four, students in the class have already begun collaboratively writing stories, producing podcasts and live-tweeting about the Olympic Games at least seven times a week. Each member will also be responsible for creating Huffington Post-style videos and long-form feature stories that give a review of the athletes and events.

“It’s a unique, collaborative work environment with a more traditional-based class,” Mirabito said. “I don’t view myself as much as an instructor, but more of an editor and trying to let students have ownership of their stories.”

The course has 16 seats and filled quickly during Spring 2022 registration. Mirabito said the waitlist was full within a matter of two to three days and he allowed an extra student to enroll to make the group numbers even. Erika Liberati, senior journalism major, said that she was fascinated by the course when she first stumbled upon it and that it is something that has expanded her experience as a Park student.

“There is so much news that comes out of the Olympics, so it is really cool to know what it is like to cover such a large-scale event,” Liberati said. “As a journalist at Ithaca College, a lot of stuff that I have done has been very Ithaca-centric, but the Olympics are obviously so global, and I haven’t covered anything like it before.”

Mark Scaglione, senior journalism major, is currently an NBC News intern who consistently follows the division’s Olympic coverage. He said the course perfectly aligns with his internship and offers him a unique experience.

“Having this parallel to doing it professionally and also covering the Olympics in my class is a great experience and is something that’s definitely a highlight of my college career,” Scaglione said. “Seeing how, as a journalist, we can cover this huge, mega-event in many aspects is really cool.”