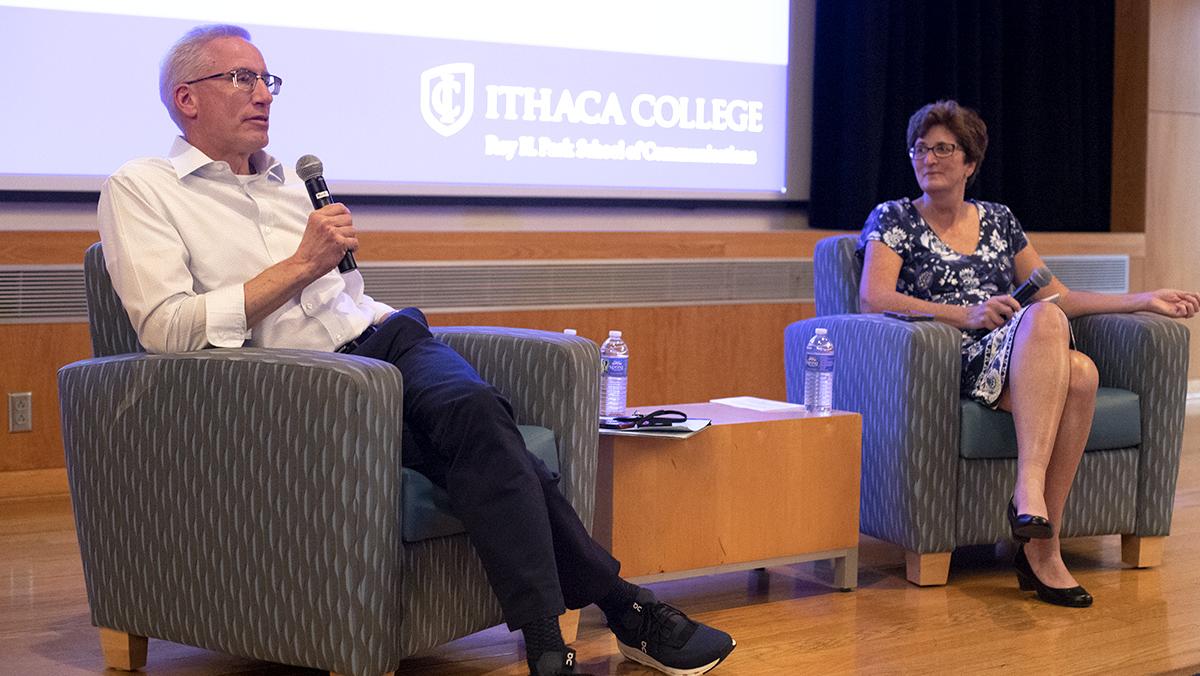 Aidan Charde/The Ithacan
From left, Mark Gross '88, senior vice president of Production and Remote Events at ESPN, and Amy Falkner, dean of the Park School of Communications, during their Q&A with students Oct. 26.
By Aidan Charde — Sports Editor
Published: November 1, 2022

The Ithaca College Roy H. Park School of Communications welcomed Mark Gross ’88, senior vice president of Production and Remote Events at ESPN, on Oct. 25 and 26 to speak in classes and participate in an open Q&A.

Gross, who graduated with a degree in television-radio, arrived at the college in the afternoon of Oct. 25, where he reconnected with current faculty and staff, including Rob Gearhart ’82, associate dean of the Park School of Communications, who was a professor for Gross. On Oct. 26, Gross spoke in several classes and participated in a moderated Q&A with Amy Falkner, the dean of the Park School of Communications.

Gross said he was excited to return to the college to share his experiences with current students. Although he has now spent over three decades with ESPN, Gross said he was initially rejected — he brought the letter from 1988 with him to prove it, keeping it in a folder with him to show students. But he said his work ethic and love of his field has helped him get to this point in his career.

“Have a passion for what you’re doing,” Gross said. “You don’t have to be the smartest person in the room. All you [have to] do is outwork everybody. … I wasn’t killing it here in classes and grades; I was lucky to get in. But I had a passion, and I worked hard, and that’s all.”

He did not sugarcoat his job or workload either. Gross admitted the work is hard and a significant time commitment, so he said he wanted to be honest to the students coming to meet him. He said he does not want people to go into the industry without having an expectation of what that can look like.

In his current role, Gross is responsible for ESPN’s coverage of Major League Baseball, college baseball, Little League, combat sports, tennis and hockey, as well as gambling and fantasy sports and the Stats & Information Group.

For students currently attending the college, meeting Gross was an opportunity to network and get insight into the field of sports broadcasting. First-year student Lucas Orlovitz, who studies sports media and wants to work in radio, said it was a tremendous opportunity to be able to speak personally with Gross.

“One of the main pulls here is that you have so many alumni in so many high places,” Orlovitz said. “Any knowledge you can gather from somebody like him speaking, which is just a whole lot, I think is super worthwhile.”

Orlovitz, along with other students at the event, got Gross’ email after the Q&A so they could reach out. Gross said he was happy to assist the students in any way possible.

“I’ll do whatever [the college] wants me to do,” Gross said. “I’ll answer whatever they want me to answer. I have no agenda.”

Falkner said the college thought it would be a good idea for students to get the chance to hear from someone with so much industry experience, especially in a field that is so popular. She said she was very happy with the turnout of students at the Q&A.

“Let’s get him up here and meet with as many of our students as possible,” Falkner said. “And as you can see by the crowd … everyone wants to see him and show him whatever it is they’re working on.”

Even after the Q&A, Gross was asked questions from eager students looking to learn. A group of around eight students stayed around him well after he finished talking, looking to shake his hand, give him their resumes or get his email address.

“I knew that I could participate and work on shows when I was a [first-year student] versus, you know, if I was going to go somewhere else,” Gross said. “I think, like, the [university] in Syracuse, it was like the first two years is a lot of classroom, and then junior and senior years you’re more involved. … [At Park], from day one, you can be involved.”

Falkner said she was happy the college could get Gross to come, even if it was for just a few hours out of the day, because his message can be invaluable to the students.

“It’s nice when you have a senior vice president at a place where many, many students would like to work,” Falkner said. “So the fact that we can pry him away for a day and a half was great.”

The Roy H. Park School of Communications will welcome 13 alumni employed by ESPN to campus tomorrow to give students a glimpse into the television industry.