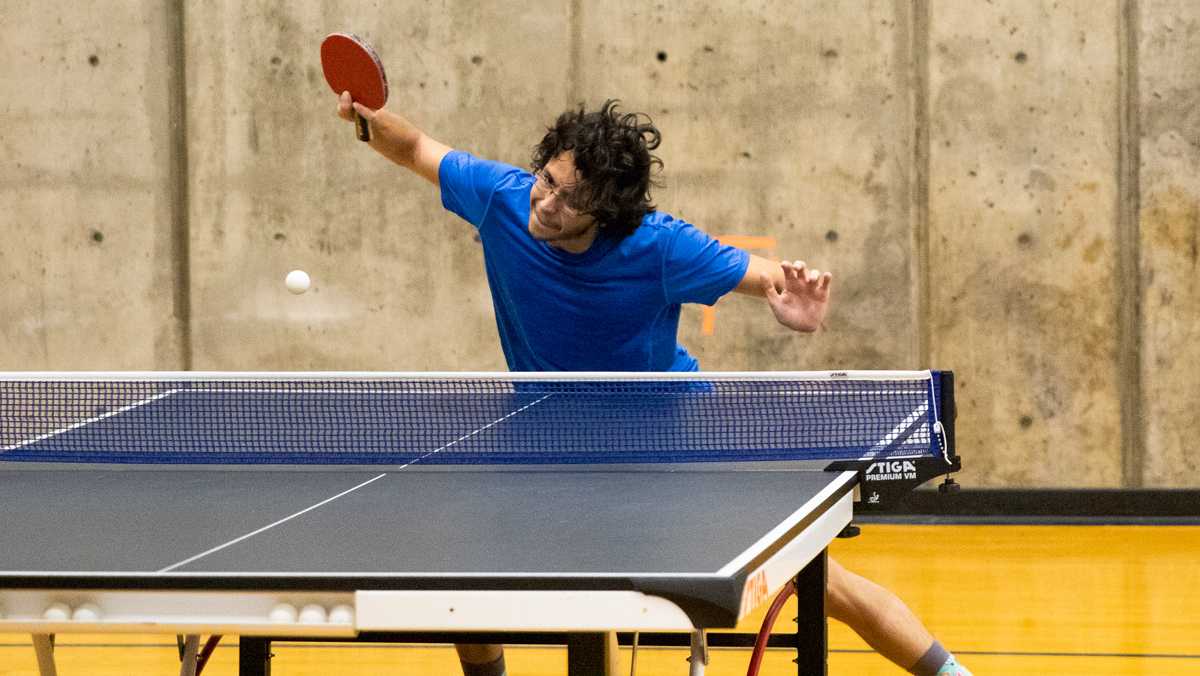 At most Ithaca College club sport practices, members do not wear jeans, flannels or Converse sneakers while competing. However, the members of IC Ping Pong are relaxed in both their attire and attitudes.

On Monday and Wednesday nights, the club members congregate in the Fitness Center gym. There are three tables set up with enough space between them for spectators. Opposing players wield paddles as pingpong balls rapidly spin between them.

Despite this, none of the players seem focused on victory. The casual clothes and friendly play foster a comfortable atmosphere in the team’s corner of the gym. Most people at the tables are not even keeping score, instead opting to just rally back and forth to try to improve their game. Junior Sean Stouffer said pingpong club has members of all skill levels. He said this creates a balance of competitiveness and friendliness between players.

“There is always an atmosphere of encouragement where beginners can get pointers and learn in a comfortable environment,” Stouffer said.

Practices are relaxed, even for a club sport. The number of attendees fluctuates from day to day, and there is no pressure to attend. Players rotate around tables, taking breaks and chatting with one another when there is not an open spot. If attendance is high, Stouffer said, the group uses a sign-up sheet for spots on the tables.

Since the group is mostly leisure-based, they do not compete in many intercollegiate matches. Once a semester, they try to travel around as a team to play against other schools. They also often host a tournament at the college for all students — not just club members — to participate in.

Senior Sam Weeks, the club’s president, said experience is not necessary to be a part of the group. She said that she had never played pingpong before coming to the college but that she came as a freshman because she knew some of the members and loved the atmosphere of the group.

“They were a really welcoming environment, so I stayed,” Weeks said. “As I played more pingpong, I got better, so I liked the sport more, and then I had more fun playing friendly people.”

Junior Billy Streleckis also had not played pingpong before coming to college, but, he said, he has been a loyal member since the spring semester of his freshman year.

“Part of my over-the-top nature really likes flinging the racket around,” Streleckis said. “Of course, I’ve developed actual form as time has gone on.”

Stouffer said that the more involved members are, the more he sees them improve.

“A lot of the regulars started at the base level learning pong, and because they came back so often, they improved a lot,” Stouffer said. “Basically, if you become a regular, you’re going to improve a lot.”

Freshman Antara Sen has been a part of the club since the beginning of the semester. She said she joined because, like several other members, she is a physics major, and friends from her classes who were involved in the club recommended that she try it. Sen said she is not sure why pingpong is so popular with physics majors, but it created an easy bond between younger students and older students, who make up most of the executive board.

“All my friends are here,” says Sen. “It’s the highlight of my week.”

While hitting the ball back and forth, some physics students can be heard casually discussing the laws of thermodynamics. Though not every table is discussing something that advanced, it is uncommon to find a table where people are not chatting with one another between points or in the midst of play.

“It’s an ineffably special environment,” Sen said. “Along with being a club, it’s also a place to blow off some steam and have some stress relief, something that college students can never get enough of.”

Junior Ioan Dascalu appeared more prepared to move than many of his teammates in sneakers, shorts and an athletic top, but while he was playing hard, he was smiling and even laughing when he didn’t get the point.

“You can kind of just ignore stress or talk to other people about your stress and hit a pingpong ball,” Dascalu said.

Stouffer said the pingpong club is special compared to many other groups on campus. He said that, while the team does participate in some competitive tournaments, the primary focus is to have fun.

“I look forward to pingpong on my most stressful days,” Weeks said. “It’s just so fun to carelessly play a game with friends.”