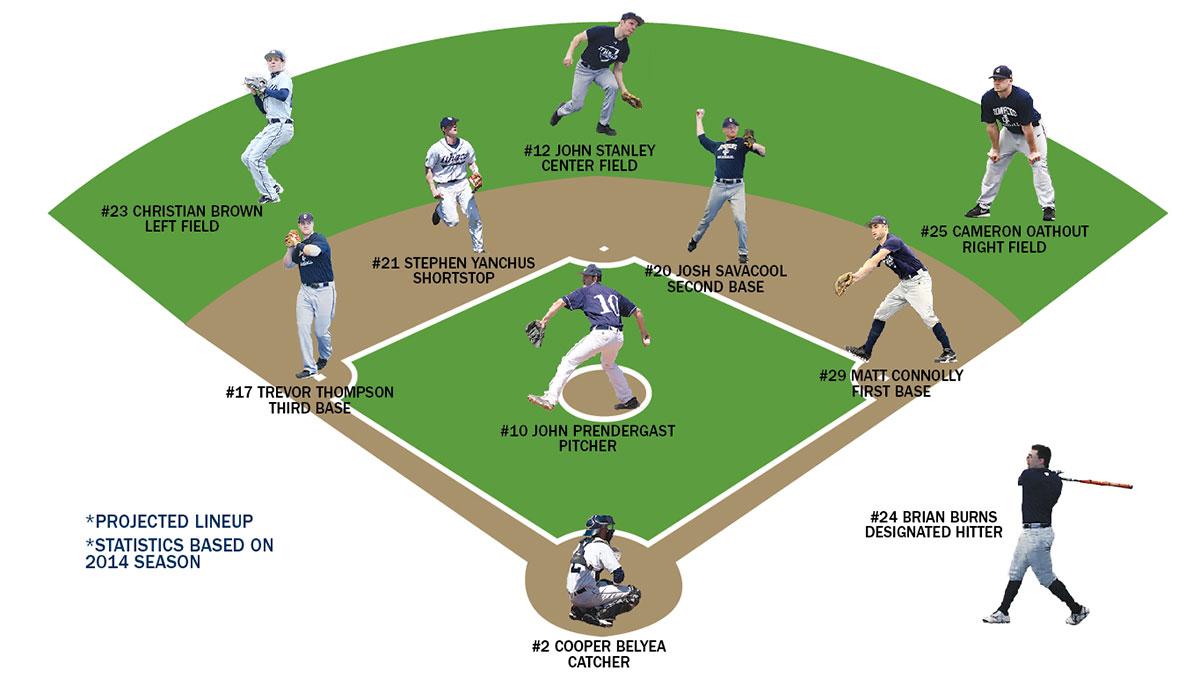 The baseball team is coming off a season that, in the eyes of head coach George Valesente, was strong enough to qualify for a spot in the NCAA Regional Tournament. Unfortunately for the squad, its 26–10 record in 2014 wasn’t good enough to make the cut in the minds of the NCAA committee.

“We were required to play a team in our league that was a provisional,” Valesente said. “The four victories against them were taken off of our record. Instead of being 26–10, we were 22–10, which cost us a tournament bid. We really feel there was an injustice [by the NCAA].”

The controversial ending to last season’s strong performance by the Bombers broke the hearts of the players and coaches, especially since the team had lofty expectations coming into 2014 after its unprecedented run in the 2013 NCAA tournament that saw it reach the national semifinal match.

However, the team is as hungry and focused as ever, and Valesente said he believes the 2015 Bombers have the tools to return to their 2013 form. And it all starts with their veteran-heavy pitching staff.

Led by their preseason All-American ace John Prendergast, who compiled a record of 9–1 along with a 2.60 earned run average in 2014, the Bombers’ starting rotation will look to shut down opponents as it did last year when it posted a combined 3.63 ERA .

Prendergast said the ample amount of experience between the starters and the bullpen will prove to be the backbone of the pitching staff in 2015.

“Most of our starters and relievers are either seniors or juniors,” Prendergast said. “A lot of us have pitched in the [Division III] World Series. That gave us the experience and composure for this season. … I think when you have four veteran starters coming back it is a necessity. … I think that was huge for our success in 2013.”

The South Hill squad’s defense looks just as solid as its pitching heading into this season.

Juniors John Stanley and Cameron Oathout along with senior Christian Brown return as the team’s starting outfielders this season after only committing two errors combined in 2014.

Despite the infield being fairly green with sophomores Josh Savacool and Trevor Thompson taking over the duties full-time at second base and third base, respectively, Valesente said the speed and quickness of his infielders, especially up the middle, elevates the team’s defensive prowess.

The only question for the baseball team this season is the offense.

The team lost the dynamite hitting and slick fielding of Colby Gee ’14, Tim Henry ’14 and Luke Stark ’14 to graduation. All three players hit well over .300 in their senior years and accounted for five home runs — four of them off the bat of Gee — and 69 runs batted in.

Senior catcher Cooper Belyea said the offense is going to try to adopt more of a scrappy type of play this season.

Valesente said the lack of power hitters won’t affect the team’s ability to score runs. He said he envisions an offense with contact hitters that excel at running the basepaths.

“It looks to me like we will be more of a singles-doubles team with good team speed,” he said.

Prendergast said the pitching staff doesn’t feel any pressure this season to carry the offense, if necessary.

“I think pitchers always feel pressure to keep the score low and give [the team] a chance,” he said. “I don’t think there’s going to be any added pressure. I think we, as pitchers, have a lot of confidence in our hitters this year. I think we are going to have a breakout season, especially offensively.”

Valesente said one of the coaching staff’s main goals for the 2015 season is to thrive under pressure situations.