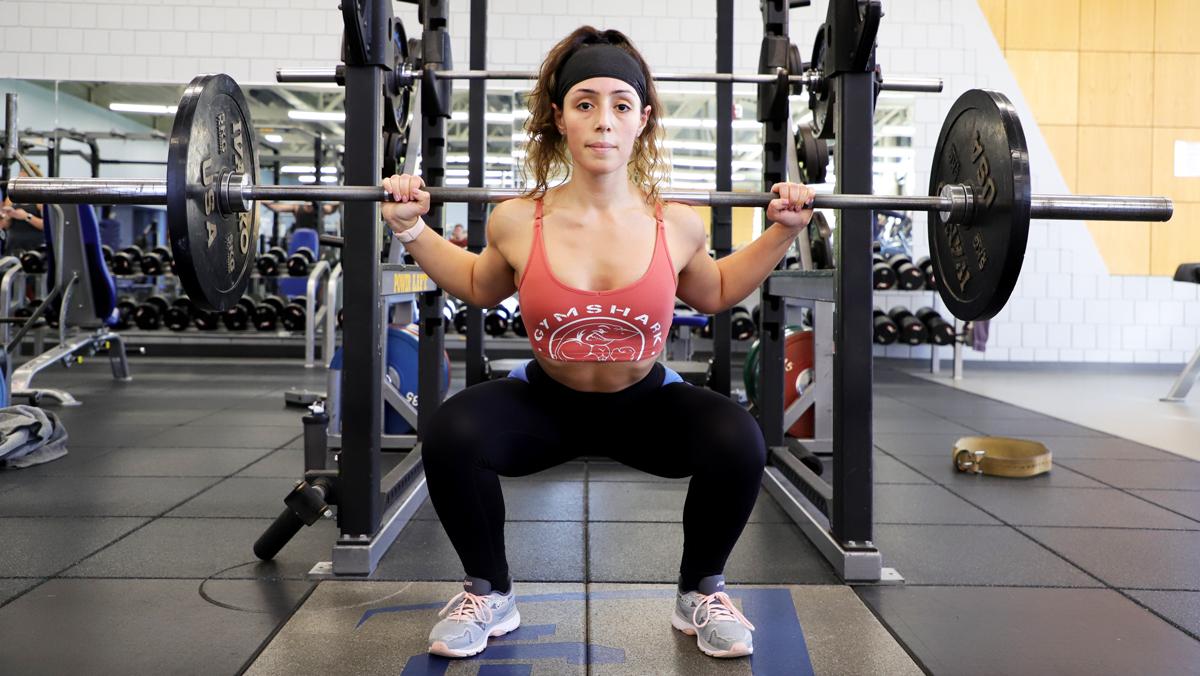 Like most college students, Ithaca College senior physical therapy student Alexandra Zanni’s life is filled with homework and exams. However, as a competitive bodybuilder, Zanni has to be just as disciplined in the gym as she is in the classroom.

Bodybuilding requires athletes to follow a strict dietary meal plan and workout regimen to obtain a symmetrical physique from the top of the body to the bottom. Powerlifters’ main focus is to become the biggest and strongest athletes. Bodybuilders can vary in age and size, while powerlifting usually has an age limit because it can be more taxing on the human body and is harder to maintain throughout life.

Injuries from running track and cross-country in high school prevented Zanni from participating in collegiate varsity sports. Instead of giving up on being a competitive athlete, Zanni started to compete in bodybuilding. She said she has been bodybuilding for three years.

“In my senior year [of high school], I got a stress fracture in my tibia,” Zanni said. “I couldn’t run, and I wanted to pick something up to stay active, so my senior year I really got into bodybuilding and started seeing results in the gym.”

Zanni has competed in four shows so far with organizations like Organization of Competition Bodies, which offers both amateur and professional bodybuilding competitions for men and women. At the New York Capital Championships on May 5 in Albany, New York, Zanni took home a gold medal in the figure junior and a silver medal in figure class B. Zanni said she is taking a break from competing to concentrate on school, but she is still training in hopes of competing again in the future.

Senior Victoria Demiris spent the majority of her time at college on the women’s rowing team. Now in her sixth year, Demiris said she has stopped participating in crew because she wants to concentrate more on bodybuilding. Demiris said she has always had an interest in competitive bodybuilding, but until now she did not have the time to commit to the sport.

Demiris said that training for a bodybuilding competition is very time consuming and expensive. While training for this competition, Demiris has had to pay for trainers, food, gym memberships, tanning and clothing. Tans help bodybuilders look leaner and increase body definition.

“I have two trainers,” Demiris said. “One is for nutrition, and she also gives cardio recommendations, and the other coach provides me with lifting programing. Coaching costs over $200 a month, and food costs are high because you are eating a lot of protein. I actually bought a gym membership outside of the school on the weekends because I have to do fasted cardio in the mornings, and the gym doesn’t open until 10 a.m. on Sunday.”

Demiris said that saving up the money to afford her bodybuilding required a lot of hard work over the summer. She said she was working over 40 hours a week at three different jobs. She was a personal trainer, a Human Anatomy teaching assistant and a group exercise instructor.

Another significant challenge to bodybuilding in college for Demiris is that she is unable to eat in the dining halls. She said she has no idea what ingredients it cooks with and what seasonings it puts on its food. Both of these things can affect the amount of muscle growth and the overall look bodybuilders are trying to achieve.

“I have to weigh all of my food, and unless I came to school with my food scale and asked the dining hall how they prepared the food, it wouldn’t be possible,” Demiris said.

Mark Radice, professor in the Department of Music Theory, History and Composition, has been bodybuilding for 48 years. When Radice was younger, he said that he competed in many bodybuilding competitions, and he continues to work out because he loves it.

“The body will hold up for a long time,” Radice said. “If you are consistent and workout sensibly and regularly, I think those are the real keys to being successful in the gym.”

Radice said it is very difficult to line up a competition when your body is at its peak of muscle growth and vascularity because the state is difficult to achieve and maintain. Vascularity, in terms of bodybuilding, is when a competitor has highly visible veins, and the skin appears very thin, which allows for maximum muscle definition. Radice used to take Niacin, also known as vitamin B3, before competitions, which helps with vascularity by increasing blood flow to the working muscles.

Radice said that when he lived in California, he would compete in as many as 15 competitions a year from April to late fall. He said he had to determine his ideal weight and build to do the best in competitions.

“I’m short, so the obvious place for me was middleweight, up to 176 pounds, but that was too light for me,” Radice said. “I usually looked best around 185 to 190 range. I’d start the season light, then gradually build up to 185 or 190. At some point, I’d hit my ideal weight, and I’d win the competition or at least place in the top three.”

Sophomore Dan Taapken competes in powerlifting competitions and said he goes to the gym five to seven days a week. He said he trains on a strict schedule to make sure he is toning every part of his body.

Taapken said he has been serious about lifting for approximately two years now. He is currently training for the Eat Rite Foods Sports Expo in Buffalo, New York, and he has competed in a USA Powerlifting competition. Taapken said he goes through a 12-week training process with the hope of being at his strongest when it is time to compete.

Taapken’s current maximum weights are well above the averages for his weight and skill level. He weighs 187 pounds and is deadlifting 555 pounds and squatting 455 pounds.

“Basically towards the end of a 12-week cycle you are dying, but you basically peak into the meet,” Taapken said. “Right now I have a few midterm goals. I want to deadlift 585 pounds and squat 495 pounds, and I want to compete again next summer, and when I do I want to have a total of 1,500 pounds.”

Taapken also said that lifting weights and going to the gym plays a big part in his mood and overall mental health.

“Lifting or any exercise will help with anybody’s mental health,” Taapken said. “For me, lifting does more than just help me feel better because if I have a bad day I can work it out at the gym.”