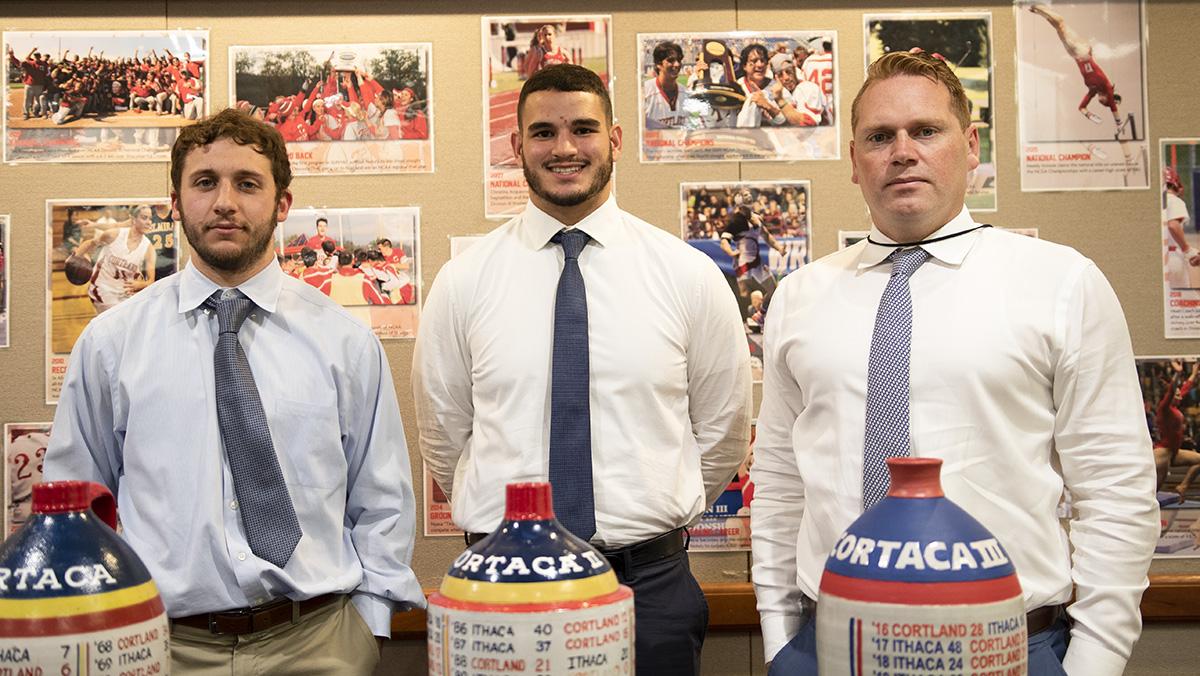 SUNY Cortland hosted the event in the Hall of Fame Room, located in the SUNY Cortland Park Center. Fran Elia, sports information director at SUNY Cortland, kicked off the event and introduced the speakers from each football program. Elia first introduced Mike Urtz, director of athletics at SUNY Cortland, followed by Antonio Valle, graduate student and captain of the Ithaca College football team, Michael Bailey, senior and captain of the SUNY Cortland football team, Dan Swanstrom, head coach of the Bombers and Curt Fitzpatrick, head coach of the Red Dragons. Elia opened by talking about the successful seasons both teams have had leading up to the game.

“What’s the same [since 2016], is two great football programs and a passionate alumni and fan base,” Elia said. “And this year especially, it’s always a good game, and it’s always two good teams, but this is only going to be the fifth time since the 1980s …  where both teams have one loss or less. So it tells you where we sit in terms of the stature of this game and how good both teams are coming in.”

The game will be played at noon Nov. 13 at SUNY Cortland Stadium Complex in Cortland, New York. Urtz spoke after Elia and urged both teams to cherish the game this year and not take it for granted. The Cortaca Jug game was not played last year due to seasons being canceled due to the COVID-19 pandemic.

“We took a lot for granted before COVID-19 [impacted] all walks of life,” Urtz said. “The challenge I want to give to both sets of players, both teams, as well as the coaches, is that between now and that ball goes up in the air at noon on [Nov. 13], I really want you to think about what you were doing a year ago. … There’s going to be a lot of excitement and there’s gonna be a lot of passion out there for both programs. I do want you to take a minute and think about the respect for each other when you play. You’re going to compete harder to play for your teammates, but we have a special relationship with Ithaca College in this game.”

Urtz added that anyone entering the event must wear a mask to be granted entry. The SUNY Cortland spectator policy states that, regardless of vaccination status, spectators at outdoor events are encouraged to wear face coverings.

Graduate students and captains Valle and Andrew Vito represented the Bombers at the press conference, both entering their final Cortaca Jug games. Since the game has not been played since November 2019, not all the players have had the opportunity to experience playing in the rivalry game. Valle said he has been preparing his teammates for what to expect when they step on the field.

“There’s nothing different about the game itself,” Valle said. “There’s definitely a bigger buzz around it. The playing level is going to be harder; it’s going to be a little bit harder to communicate, but it’s football, and we’re there to have fun every time.”

Vito has played the Red Dragons three times prior to this year’s game, and the Bombers are 3–0 in those games. Being familiar with the Bombers main rivals, Vito said the game is intense, but the animosity stays between the whistles.

“They’re a great football program and we’re a great football program, so we respect them a lot,” Vito said. “Every game we’ve come out, and it’s been a competitive game, and there’s never really been much tension in my four years. I mean, obviously you get a little trash talk on the field, but other than that, they put the same amount of work as we put in, so we’re excited.”

Fitzpatrick was hired by the Red Dragons in February 2020, and this year will mark his first Cortaca Jug game as a head coach for SUNY Cortland. Fitzpatrick has started his tenure with a 9–0 start, the best a first-year head coach has had in program history since Carl “Chugger” Davis started 11–0–6 beginning in 1932. Fitzpatrick said he has picked the brains of his assistant coaches and the previous head coach so he knows what to expect for the game.

“I’m excited for the alumni of both schools and the fans that will be in attendance. It’s going to be an exciting environment, and rightfully so,” Fitzpatrick said. “For these two football teams who do things the right way, play hard, play very tough and fair, I can’t wait to get to this Saturday.”

“We’ve got two programs that are flourishing, and we’re going to put that together on Saturday for a big celebration of a lot of young student-athletes doing what they’re supposed to do day-in and day-out with great competition, great sportsmanship and playing a huge game with a lot of energy and excitement,” Swanstrom said. “I think it’s a pretty neat experience. And I’m just fortunate to have the best ticket in the house.”